Why no one will face charges in Chesterfield Walmart abduction hoax

CHESTERFIELD COUNTY, Va. -- Authorities said no one will face charges in a staged abduction outside a Walmart store in Chesterfield County Sunday night.

Police were called to the 900 block of Walmart Way just after 9 p.m. on Sunday after several witnesses reported seeing what they believed was a female being abducted.  Police released information about the incident and surveillance photos of the female and several of the males involved on Monday.

Then police said that the female, who was safe and unharmed, came to the department’s Hull Street Station Monday evening after seeing herself on the news.One of the men involved in the incident was with her, and she came to the station in her vehicle, which was the vehicle used in the apparent abduction.

Chesterfield Police officials said Friday afternoon that no charges would be filed after reviewing the incident with the Chesterfield County Commonwealth’s Attorney’s Office.

“We are deeply troubled by the danger these young adults put themselves and others in by staging this abduction, and the law enforcement resources that were wasted investigating a crime that did not occur, but there is no statute in Virginia that specifically applies to performance crimes,” Chesterfield Police Chief Col. Jeffrey S. Katz said in a statement. “While there are statutes that may loosely apply, I think it’s important that we charge based solely on legislative intent. Going forward, we would encourage members of the General Assembly to consider legislation that addresses the hazards of social media performances that jeopardize public safety.

Katz said officers were "grateful" the people who staged the hoax owned up to what they did and "understand the impact of their actions."

Officials released surveillance video of the incident to "educate the public about the potential impact of staging crimes."

“We think it is important for people to see what this incident looked like to police and those who witnessed it,” Katz said. “We would strongly encourage people to think through the potential consequences of staging crimes in public places before engaging in such behavior.” 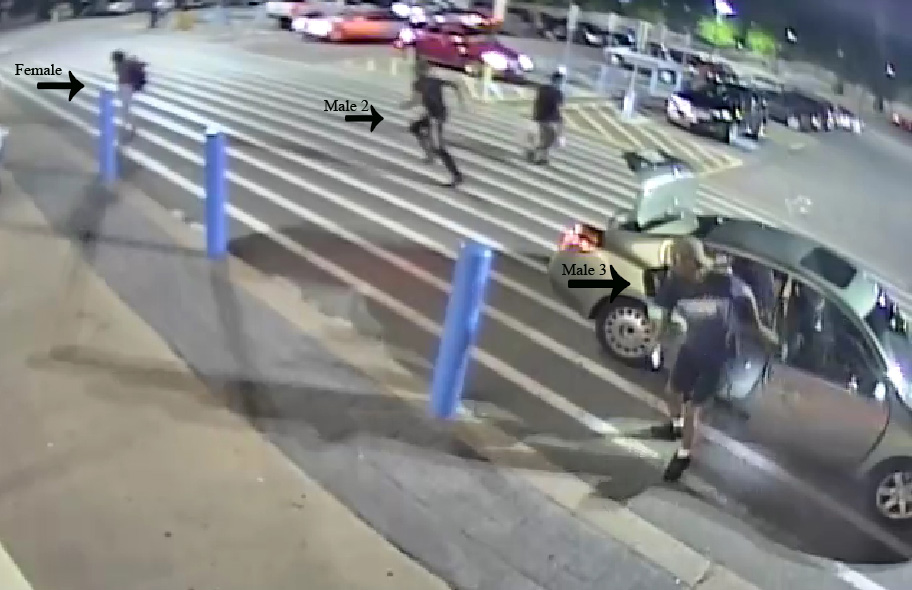 How it looked to witnesses

"Several witnesses reported that a four-door sedan, which had Virginia tags and appeared to be green or gold in color, pulled up to the store’s grocery-side doors and a male approached the vehicle," a Chesterfield Police spokesperson said. "As he opened one of the vehicle’s doors, the vehicle’s trunk opened and a female jumped out of the trunk and fled."

It was then, police said, two men got out of the car and chased the female - who police described as a black female, about 15-20 years old, with full hair that was pulled up.

Police described the male who approached the vehicle as a black male wearing a white shirt, gray shorts and black-and-white shoes.