Scroll down for part two of the ceremony/festivities.

When Meghan Markle walks down the aisle of Windsor’s St. George’s Chapel to meet her groom, Prince Harry, it will be the start of a wedding unlike any the British royal family has seen before.

In a departure from tradition, Markle will walk much of the way up the aisle unchaperoned, followed by her 10 bridesmaids and page boys — a move that is unprecedented for a royal bride in Britain and can be seen as a bold feminist statement.

Only when she reaches the 15th-century chapel’s Quire will she be accompanied for her final steps to the foot of the altar. After a week of tumult, it was revealed on the eve of the wedding that her husband-to-be’s father, Prince Charles, would take on this role rather than her own father, Thomas Markle Sr., who has been ruled out by ill health.

The change came so late that the order of service had already been printed with Thomas Markle’s name. He, however, will be thousands of miles away in Mexico, reportedly recovering from a heart procedure.

Meghan’s mother, Doria Ragland, will be present and was seen with her daughter arriving at the hotel where she spent the last night before the wedding. Harry was at a separate hotel with his brother and best man, Prince William.

• The 600 invited guests start to arrive ahead of the noon (7 a.m. ET) ceremony, dressed in their best, including Oprah Winfrey and Idris Elba.

• The queen confers the title Duke of Sussex on Prince Harry, making Meghan the first-ever Duchess of Sussex on their marriage.

• A vintage Rolls Royce car arrives at the hotel where Markle is staying, ready to carry her to Windsor Castle. 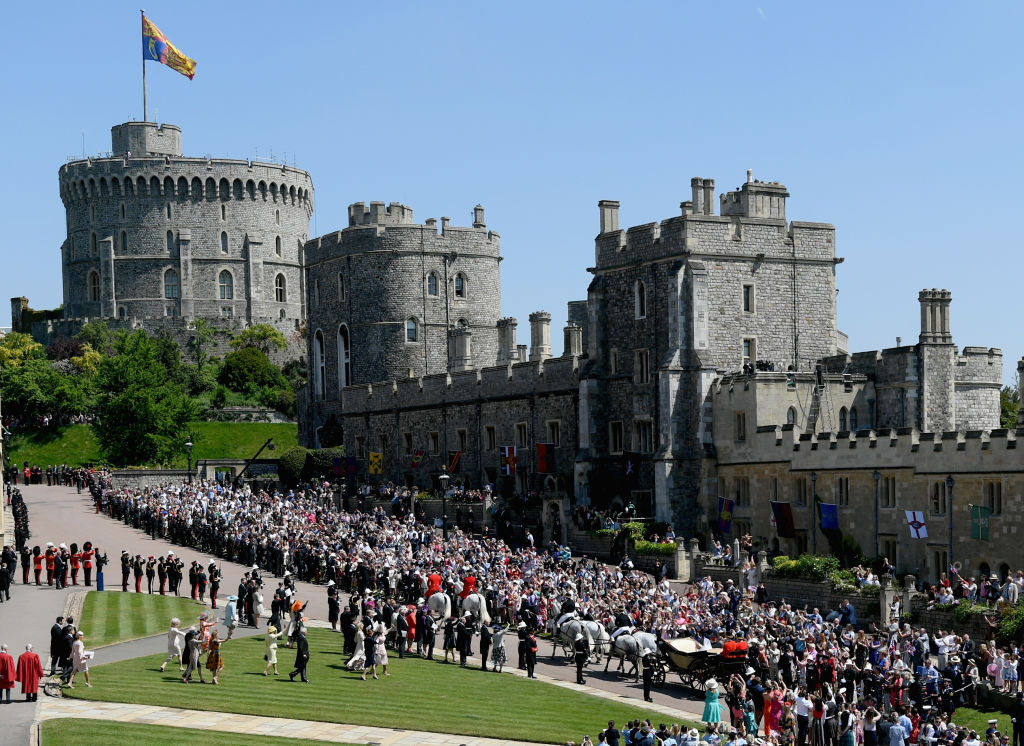 Crowds were gathering in the streets of Windsor from early Saturday, hoping to catch a glimpse of the bride and groom as they process through the town in an open horse-drawn carriage following the ceremony. Other devoted royal fans have camped out for several days to get the best possible spot. Forecasters promise blue skies for the big day.

Many more people planned to rise early (or stay up all night) in the United States to watch as Harry, long a favorite with the British public for his irreverent good humor, ties the knot with his California-born bride.

Hours ahead of the ceremony, Kensington Palace announced that Queen Elizabeth II was giving her grandson, Harry, the titles of Duke of Sussex, Earl of Dumbarton and Baron Kilkeel. This means that after their marriage, Meghan will be referred to as the Duchess of Sussex — the first person to hold that title.

The first man to hold the title of Duke of Sussex was an anti-slavery campaigner and supporter of rights for Catholics and Jews.

The wedding represents a historic moment for the royal family, as it welcomes an outspoken biracial, American divorcée into its ranks.

WINDSOR, ENGLAND – MAY 19: (L-R) Prince Harry, Duke of Sussex and Meghan, Duchess of Sussex leave Windsor Castle in the Ascot Landau carriage during a procession after getting married at St Georges Chapel on May 19, 2018 in Windsor, England. Prince Henry Charles Albert David of Wales marries Ms. Meghan Markle in a service at St George’s Chapel inside the grounds of Windsor Castle. Among the guests were 2200 members of the public, the royal family and Ms. Markle’s Mother Doria Ragland. (Photo by Eamonn M. McCormack/Getty Images)

In a reflection of its contemporary nature, the couple has chosen a modern set of wedding vows, with the text of the formal parts of the service taken from Common Worship, the Church of England’s standard liturgy, first published in 2000. It is thought to be the first time that this text has been used in a royal wedding.

This means there will be no promise by Markle to “obey” her husband. Rather, Meghan will pledge to “love him, comfort him, honor and protect him.” Harry has chosen to wear a wedding ring, unlike his brother.

But perhaps the most obvious break with tradition will be in the music for the ceremony, which will be watched by millions around the world. While the couple have chosen a selection of classical works as the 600 guests wait for the ceremony to start, The Kingdom Choir, a group of 20 gospel singers, will perform the Ben E. King classic “Stand by me” during the service.

The award-winning young cellist Sheku Kanneh-Mason has been chosen to play during the signing of the register. The ceremony will end with the Etta James version of “Amen/This Little Light of Mine,” a gospel song that became synonymous with the US civil rights movement.

The dean of Windsor, the Right Reverend David Conner, will conduct the service, while the Archbishop of Canterbury, Justin Welby, the most senior cleric in the Church of England, will officiate.

But in a break with British royal custom — and in a nod to the bride’s homeland — Chicago-based bishop Michael Curry, the first African-American head of the Episcopal Church in the United States, will give the sermon.

The presence of Harry’s late mother, Diana, Princess of Wales, will also be felt at the ceremony. “Guide me o thou great redeemer” was sung at Diana’s funeral, at her memorial service in 2007 and at Kate and William’s wedding in 2011.

Diana’s sister, Lady Jane Fellowes, will give the reading — words on the power of love from the Song of Solomon.

The Queen and Prince Philip will of course be present for the occasion. It will be Prince Philip’s first public appearance since he had hip surgery last month.

Guests from Markle’s side include cast members from “Suits” — the legal drama in which she made her name. Tennis star Serena Williams, a good friend of Markle, also confirmed she was attending via social media.

In an effort to be inclusive, the couple has invited 2,640 members of the public, including 1,200 ordinary people from communities around the United Kingdom, to watch from inside the castle grounds as the guests arrive.

Among them were Helen McKenzie and Louis Davidson, who were invited through their local community in Somerset. “We got the invitation a while ago but had to keep it secret. It wasn’t easy!” Davidson told CNN as the pair headed into the castle.

WINDSOR, UNITED KINGDOM – MAY 19: Prince Harry, Duke of Sussex and The Duchess of Sussex depart following their wedding in St George’s Chapel at Windsor Castle on May 19, 2018 in Windsor, England. (Photo by Owen Humphries – WPA Pool/Getty Images)

The world will get its first full glimpse of the wedding dress when Markle, 36, steps out of a car by the chapel’s West Steps. The designer has been kept a closely guarded secret, prompting months of speculation.

She will be accompanied in the first part of the wedding procession, through the nave, only by her six bridesmaids and four page boys, who include Harry’s four-year-old nephew Prince George and three-year-old niece Prince Charlotte, as well as Markle’s godchildren, and the Dean of Windsor.

Prince Charles will join her when she reaches the Quire — where the main royal guests are seated — and will walk her down the Quire aisle to the foot of the altar.

There, she will be met by Harry. As a military veteran and Captain General of the Royal Marines, he is likely to wear ceremonial uniform, as did William on his wedding day.

After the hour-long ceremony, the newlyweds will emerge from the chapel by the West Door and make their way to the horse-drawn carriage which will carry them in procession through the streets of Windsor. There will be no shortage of military pageantry, with members of the Household Cavalry forming a staircase party and trumpeters playing as they make their exit.

Cheering crowds will greet the couple as they begin their first journey together as husband and wife, less than two years after they first met on a blind date in London.