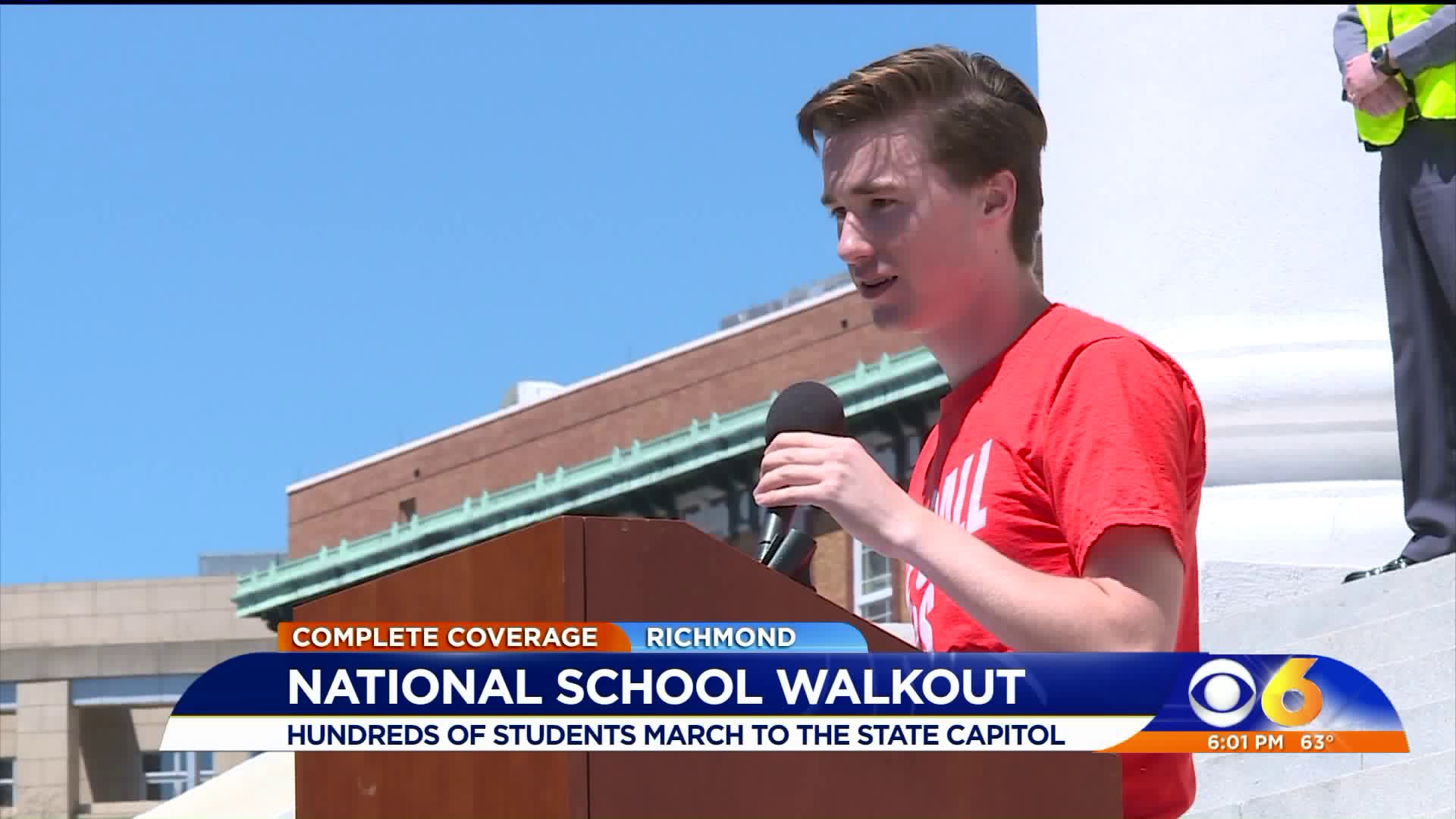 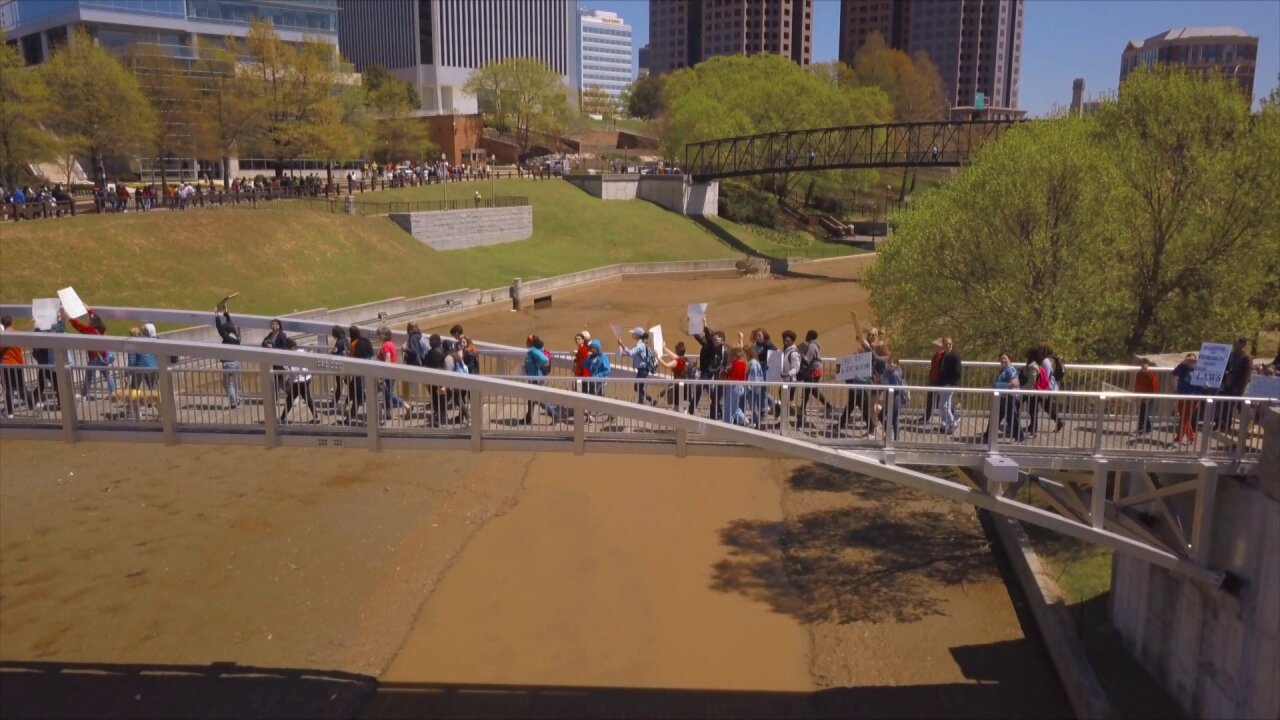 “Every year we add a few more dates to the calendar and pledge to never forget the innocent lives taken by a person who never should have gotten his hands on the weapon he had,” said Governor Ralph Northam. “How many more dates will we add to the calendar before we take the actions we need to take to keep our schools churches theaters and concert venues safe?”

Police had planned for up to 10,000 people to attend the march and gun control rally, but hundreds marched. Kennedy Mackey, along with Maxwell Nardi, organized the Virginia rally that spanned the two miles between Brown's Island to Capitol Square.

"We got the call saying, 'We have our eyes on you in Richmond,'" Mackey said after hearing from the national organizers.

Opponents, like the Virginia Citizens Defense League, argued that students are aiming to lessen their civil rights.

"They're trying to say gun control is the answer. They're wasting their time. Guns protect people much more than they are to take lives," said the group's president Phillip Van Cleave.

The students called on naysayers to listen to them despite their youthfulness.

"We just ask before you start to downplay what we have to say that you listen to us. We are the victims of this. There aren't 70-year-olds being slaughtered in classrooms. They are 17-year-olds."

“To all of those who don’t want change on this issue, think about this, if we are old enough to get shot than we are definitely old to have an opinion about being shot,” said a Deep Run High School student.

There were mainly students who showed up to protest and advocate for gun control. But, several parents were spotted holding signs alongside their children.  Including the parent of a Virginia Tech University student who survived the April 16, 2007 school shooting that killed 32 people and wounded 17 others in two separate attacks.

Haas considers herself one of the lucky ones.  Her daughter Emily survived the attack.

“She was in a classroom where there were seven survivors but 11 of her classmates were shot and killed along with students and professors,” said Haas.

"Ultimately, this is a civil right. It's a problem of your right to live," said Nardi.

“This time there’s something different and that difference is you,” said Northam.  “You are standing up taller, speaking louder and sending a message that this issue is not going away.”

“As your Governor, I have a responsibility to tell you the importance of staying in school, but I can’t think of anything you could be learning right now that is more important than the incredible power and responsibility that you have to stay in this fight and hold people like us accountable for keeping you safe,” said Northam.

“I wish I was in bio class right now because that would mean I wouldn’t be out here shouting, screaming crying for my life,” said student Carlos Brown.

For the second time in two months, thousands of students from across the country are streaming out of class Friday as part of a National School Walkout to demand action on gun reform -- even as Florida police investigate a fresh shooting that injured a student Friday morning.

Students are walking out of class at 10 a.m. in each time zone to observe a moment of silence for shooting victims.

Before Friday's walkouts began, the latest school shooting happened in Ocala, Florida, some 65 miles northwest of Orlando. Police said a student was shot in the ankle at Ocala's Forest High School, and a suspect is in custody.

Many students across the country -- including current Columbine students -- say not enough has been done to help prevent mass shootings.

Besides observing moments of silence, other actions during the day will include marching to a local lawmaker's office, allowing open-mic time for students to share concerns and helping register those who are eligible to vote. Students at more than 2,500 schools were set to participate.

In Washington's Lafayette Square across from the White House, high school students gathered well before 10 a.m.

One of those demonstrators, Hiam Baidas of Falls Church, Virginia, said the country needs laws making it more difficult to buy guns.

"I think the youth are the movement that is going to change and better our country."

Teachers, too, are marking the day. At Stoneman Douglas High, where a gunman massacred 17 people two months ago in Parkland, Florida, teachers got an early start, demonstrating outside the building before classes began.

Those teachers combined calls against gun violence with requests for more school funding.

"Enough is enough!" they chanted, holding signs with messages such as "Children's lives > assault rifles," "Arm me with school funding" and "Arm me with better pay and lower class size."

But Stoneman Douglas students themselves may not see the same kind of leniency they saw when students walked out of class across the country on March 14.

Students there still walked out just after 10, but some said they were planning to do acts of service on campus instead.

She was disturbed by her own reaction -- or lack thereof -- to the February massacre in Florida.

"When I found out about the shooting at MSD, I remember I didn't have a huge reaction. And because of that, I knew I needed to change myself, and we needed to change this country," Lane said.

"We should be horrified, and we're not anymore. It's American culture."

Lane said students should be empowered "to do the walkouts and become leaders in their communities, speaking up when they see inaction."

The movement also encourages young people to push for legislation at the state level if Congress doesn't act.

"The federal government can set standards and practices that apply to all states around gun safety. But states have the option of passing additional measures to protect their own residents from gun violence," its website says.

Students are calling for several measures, including banning assault weapons, high-capacity magazines and bump stocks; mandating universal background checks; placing a minimum age of 21 on all gun purchases; implementing waiting periods between a gun purchase and gun transfers; and allowing families to petition a court to remove guns from individuals at risk of injuring themselves.

While there hasn't been major congressional action since the Parkland massacre, some cities and states have toughened gun control.

In Florida, after Parkland students rallied at the state Capitol, Republican Gov. Rick Scott signed a gun bill called the Marjory Stoneman Douglas High School Public Safety Act. It raises the minimum age to buy any firearm in the state to 21, bans the sale or possession of bump fire stocks and adds $69 million in funding for mental health services in schools.