Local students on National Walkout Day: ‘Stand up for what you believe’

RICHMOND, Va - The protests took different forms at different schools, but students across Central Virginia left their school buildings on a cold Wednesday morning to join a nationwide, student-lead call to end gun violence one month after the shooting at Marjory Stoneman Douglas High School in Parkland, Florida.

At Richmond Community High School, students and school staff stood on the front steps, listening to biographies and pausing for a moment of silence for each of the 17 people killed in Parkland, Florida. Similar scenes of reverent silence played out around Central Virginia.

Students at Open High School lined Belvidere Street near the Virginia War Memorial holding signs with the victims names on them and messages like “End Gun Violence Now.”

"I'm really proud of them,” said Diana Weinstein, a parent at Thomas Jefferson High School where hundreds of students packed the bleachers by the football field for a student-run assembly.

Weinstein added that unfortunately, many students in Richmond did not need to see the events in Florida to understand the human toll of gun violence.

"There's tension. There's guns all around us. There's violence. Many of these students live with violence and uncertainty in their lives. And it's a disappointment that our leaders at the state level and the federal level haven't done anything about it,” Weinstein said. 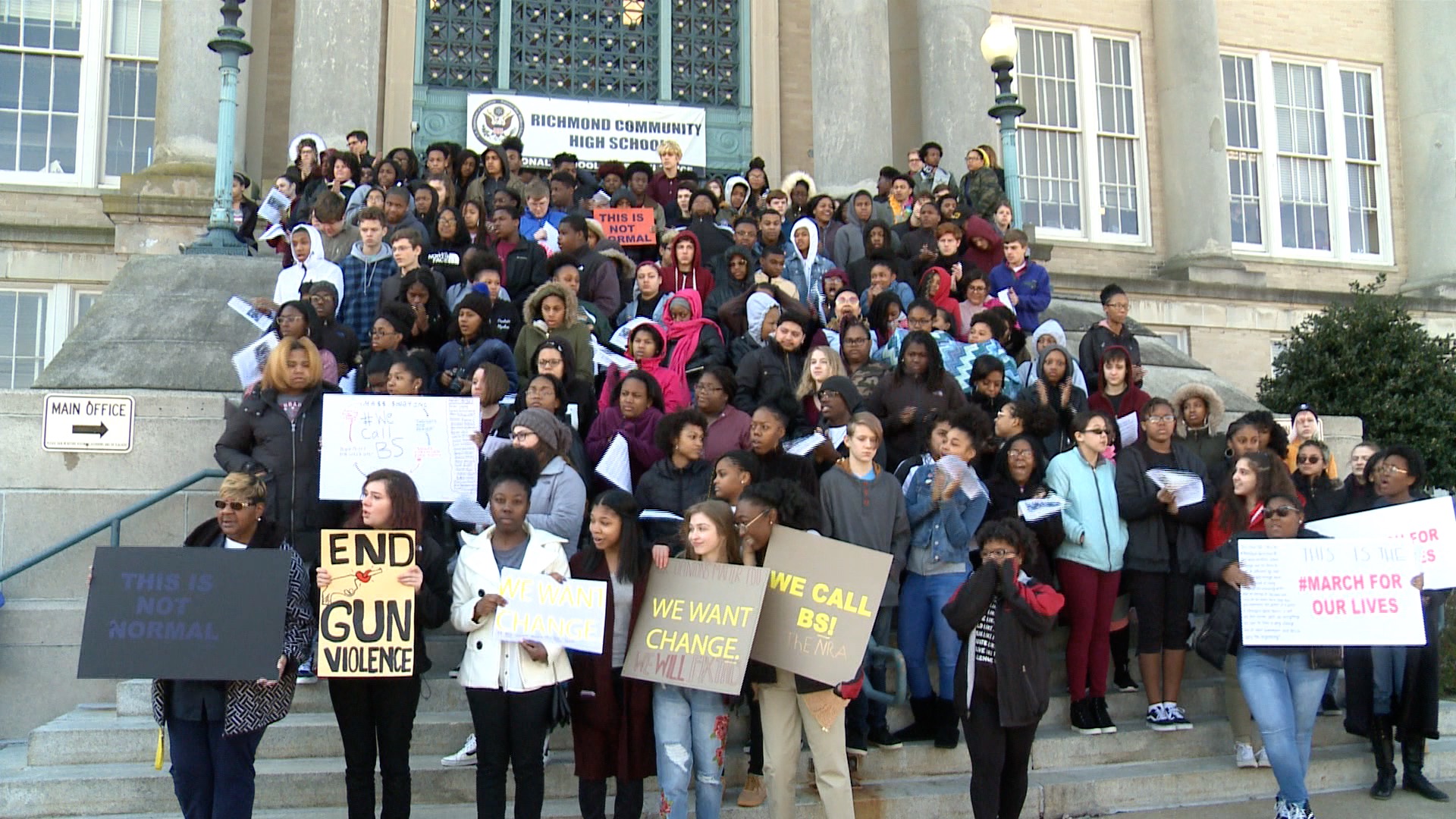 Hundreds of students at Douglas Freeman High School in Henrico gathered on the school’s athletic fields. Student organizer Maxwell Nardi, a senior at Freeman, responded to criticisms of the walk outs that students calling for change do not know exactly what they want changed.

At Appomattox Regional Governor’s School in Petersburg, more than 300 students at the school walked out on a cold March morning to honor the Parkland shooting victims.

Freshman Grace Phipps, who helped organize the events there, said she does not a grudge against the students who disagree with her stance and decided to stay inside. However, she said the Florida shooting is the latest example of a weakness in American gun laws.

"The shooter was 18. He couldn't go and get a drink at a bar, but he could go order a semi-automatic rifle. I feel like there are some issues about that,” Phipps said.

Students in California spell out ENOUGH.

Officials with Hanover County Schools had said prior to Wednesday that students would not be permitted to leave their school building because of safety concerns and SOL test happening in high schools. Still, a group of 20-30 Atlee High School students were eventually led by school administrators to stand by the flag pole in front of the school.

Dana Heiter helped organize the Atlee walk out through social media. Her group posted tips for walking out, advice on what to do once outside, and urged students in classes where SOL testing was happening to stay put.

Heiter said she was surprised how quickly counter groups sprung up on social media, attacking their efforts and leaving hateful posts about students who planned to walk out.

“If you feel like people standing up for what they believe in is coming after you, then you need to stand up for what you believe in too, but don’t go after them because too wrongs don’t make a right,” Heiter said. “It’s not going to change anything to just butt heads and never get anything done.”

Most students who walked out Wednesday morning said elected leaders should heed their message, regardless of their political party.

"Personally, I just turned 18, and I registered to vote the day I turned 18. We know that our voices have power, and that our votes count.” Hester said.

After Wednesday's successful event, students said they are turning their attention to the next walkout planned for April 20, in memory of the Columbine school shooting.