Someone walked into VCU Siegel Center and stole $8,000 in equipment

RICHMOND, Va. — VCU Police said a man walked into the VCU Siegel Center on the Monroe Park campus and stole over $8,000 in media equipment.

Detectives have asked for help identifying the larceny suspect.

On Feb. 25, at 2:45 a.m., the man pictured in released images entered the Siegel Center and allegedly proceeded to take media equipment, including cameras, as well as clothing from the facility.The items are valued at more than $8,000, police said.

At this time, it is unclear if the suspect is affiliated with VCU. 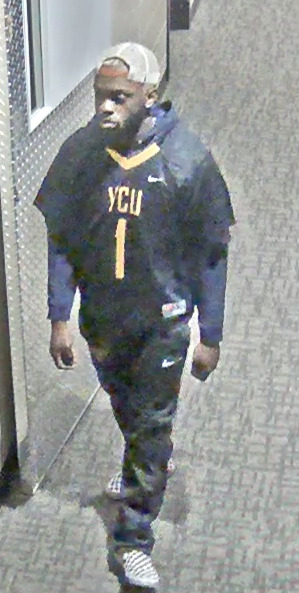 In one photo released of the suspect, he wore a hat with a “Port City” logo and a sweatshirt with a “United States Rowing” graphic. He carried a small fire extinguisher in the front pocket of the sweatshirt.

A second image showed a man wearing a hat turned backwards. He is also wearing a shirt with a “VCU” logo over a sweatshirt, dark pants and shoes with a checker pattern.

Anyone with information about this crime is encouraged to contact VCU Police Det. Lee Olds at (804) 382-2719 or by email at oldskl@vcu.edu.

Users can submit tips, screen shots, photos and videos directly to VCU Police; tips are monitored 24/7. Tips can also be submitted to Metro Richmond Crime Stoppers at (804) 780-1000 or on the P3 Tips mobile app; for more information, visit http://www.crimestoppersrichmondvirginia.com/.