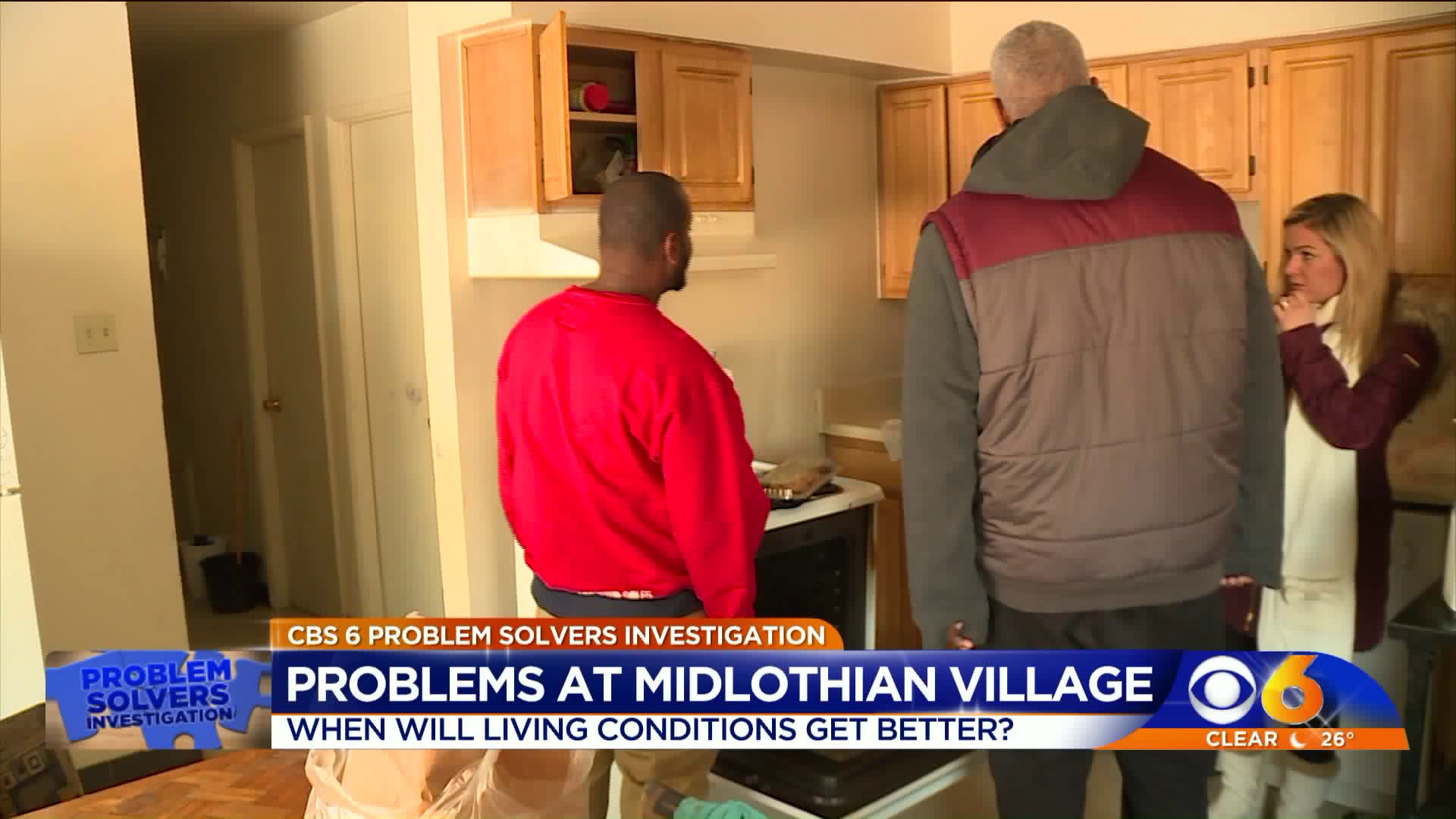 "Oh wow... obviously the ceiling has broken through," McEachin said.

They're the same problems viewers have been telling us about for months.

And, the Congressman did not mince his words.

"The stove has to be open 24/7 to keep this apartment heated up," resident Diandra Coleman said.

"That's just basically helping with the heat, keeping the heat in her," a man in another apartment said.

To leaks causing a black substance on the wall:

"It started during the summertime, somehow when her air conditioner upstairs runs it started creating a leak, they came in and fixed it like twice maybe more times and it still comes back," Coleman said.

"An unhealthy, unsafe situation is what it looks like to me," McEachin said.

To floors caving in:

"If you step on this floor too hard and over there, you can see the floor sinking in. It's not leveled right," Yakinya Best, another resident, said.

"I can see it's not level," McEachin replied.

To bullet holes in windows, and bugs streaming out of the walls… The list of problems at the Section 8 housing complex in Richmond goes on and on.

"For the last two years, this is what I have been going through," Coleman said.

"To be forced to live in conditions like this, this young lady has to pay an electric bill that has now tripled because these folks won't come fix the heat. It's not right. It's not the way you treat people," McEachin said.

And, McEachin said he was surprised by what he saw given the complex's most recent federal inspection score, which was an impressive 90-b out of 100 in July of 2015.

"Do you think this place should get a passing grade?" CBS 6 problem solver Melissa Hipolit asked.

"No, no, this is just as bad as it was out in Essex Village," McEachin responded.

McEachin is talking about the unsafe and unhealthy living conditions cited by Henrico County leaders at another Section 8 complex.

A CBS 6 investigation into the issues at Essex Village led us to uncover problems at other Section 8 properties in the area: Woodland Crossing and Hope Village.

All three receive millions in taxpayer dollars to subsidize rents.

Midlothian Village also receives taxpayer dollars to subsidize rents, and we're still waiting for Department for Housing and Urban Development to tell us how much.

McEachin said he has tried to get HUD to take action, but he claims he hit a wall.

"I'm having a trouble getting a meeting with Ben Carson, as I shared with you earlier, so there is a limit to what we can do, but we've had success working with you and other media organizations, McEachin said.

While Diandra Coleman and her three boys remain skeptical about the future of the complex, she said the owners did finally fix her heat after a visit from CBS 6.

"I've been working with them because really we don't have anywhere to go, but this is getting to the point where I am just getting tired of it," Coleman said.

Midlothian Village is currently owned by New Jersey based Tryko Partners, but they are planning to sell the property very soon.

They purchased a private partnership interest in 2013.

They declined an interview request, but the Vice President of Property Management, Jack Nusbaum, did send CBS 6 the following statement:

“From the outset of our involvement with Midlothian Village, we recognized the challenges this property faced. Despite the investment of more than $3 million in improvements, we realized that a full overhaul of the buildings and individual units would be the only solution for bringing the property to an acceptable level. Nearly two years ago we set out to identify a new buyer that would commit to doing just that. We rejected several offers from companies that would not commit to full-scale renovations. Rather, we continued to search for the right company. That company is Community Preservation Partners, a well-capitalized owner/operator with a long and recognized track record for affordable-housing rehabilitation. We are confident that CPP and its partner, The Hampstead Companies, will take Midlothian Village to where it needs to be – an attractive, comfortable, secure community that residents will be proud to call home.”