HOPEWELL, Va. -- Two weeks after a Hopewell third grader discovered his grandfather dead of a heart attack, he suffered a stroke.

Eight-year-old Jamarion Bryant, a student at Dupont Elementary school, is recovering in the pediatric intensive care unit at the Children’s Hospital of Richmond at VCU.

He was transferred there by ambulance from John Randolph Medical Center January 4, after complaining of a headache.

“He was like my head is hurting,” said Jamarion’s mother Tiffany Curry. “We gave him ibuprofen and we went upstairs and not even four minutes after that he started screaming, screaming and crying, ‘mom help me, help me!’”

“His face got real kind of pale and his mouth… the left side wouldn’t move,” she added.

Jamarion had to undergo a 12-hour emergency surgery after scans showed bleeding and swelling in his brain.

“He had an arterial venous malformation, it’s a little different than an aneurysm but it’s an abnormal group of blood vessels that are weak and they broke, and when they broke he had a hemorrhage inside of his head,” said Dr. Mark Marinello, Pediatric Intensive Care Unit Medical Director at the Children’s Hospital of Richmond at VCU. 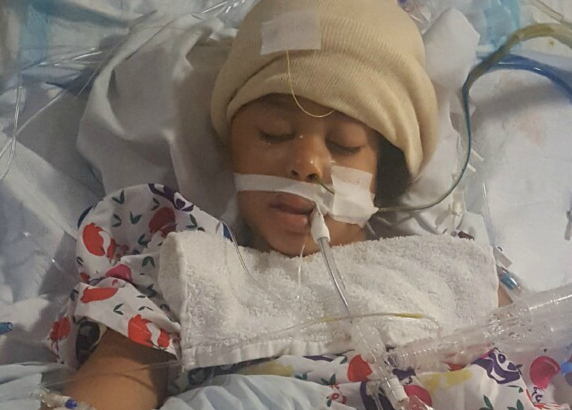 “It’s a life-threatening issue that many patients don’t survive.”

“They were able to go into his brain and resect all of those weakened blood vessels and remove them to prevent them from bleeding and this happening again,” said Dr. Marinello.

“I think I have cried everyday all day,” said Curry. “Just watching him struggle is hard. If I didn’t stay on top of him and watch him, he could have easily passed away in the bed.”

Two weeks post-surgery, Jamarion is unable to talk and is experiencing weakness on his left side, but doctors remain optimistic.

"His prognosis is very good,” said Dr. Marinello. “He did have a stroke, he will have some permanent effects from this, but because of his age he will likely regain a lot of the function he had before but a lot of that is still yet to be determined.”

In the meantime, Jamarion looks forward to hospital visits from service dogs, and his family hopes to purchase one to help him during his recovery.

It’s unclear how long he will remain hospitalized, but once discharged, he will begin rehabilitation.

“I just want him to have his full personality back and make sure he doesn’t lose that at all,” said Jamarion’s stepfather Lanard Ore.

“You’re stronger than me, you have five IVs and I cry just getting one, so you’re a solider in my book.” he praised of his stepson.

Days before Christmas, Jamarion, his 10-year-old brother and another relative found his grandfather, who the family shared a home with, unresponsive. His mother is now the only breadwinner in the home. She is a server at an area restaurant. Jamarion also has a 9-month-old brother.

“I work every day to make the money for the bills and you don’t really plan for something to be out of work for weeks or months,” said Curry. “It’s definitely hit us pretty hard and we just go by what we can and hope for the best.”

“We just want everybody to pray for him, we want him just to be back to how he was, the happy, running around crazy kid,” she added.

A fund has been set up to help the family with the mounting expenses.