URBANNA, Va. -- The lead singer and a vocalist of the Central Virginia band Sweet Justice are hospitalized after a fire gutted the couple's historic home in Urbanna in Middlesex County Saturday morning.

Officials with the Middlesex Volunteer Fire Department said crews were called to 49 Watling Street at 7:35 a.m.

All four of the county's fire departments, along with tankers from Gloucester and Mathews counties assisted, because of the freezing temperatures. 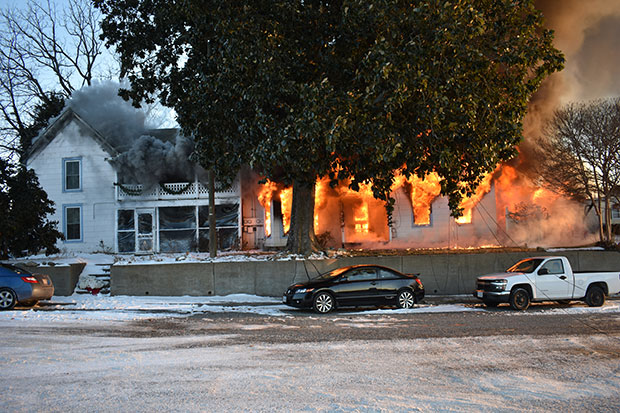 A man and a woman, identified as Rod McCordie and Beth Justice,  were airlifted to VCU Medical Center.

Officials said their injuries are not believed to be life-threatening, but they are being treated for burns and smoke inhalation.

Fire officials said two other people inside the home were able to escape without injury.

Justice is the lead singer and McCordie is the bassist and a vocalist for the band, according to the group's website.

The band posted a statement on Facebook about the fire.

"We are sorry to say we will not be opening for ZOSO tonight at the Norva," band member Evan Rosenthal wrote. "As many of you have already heard that Beth and Rod's house burned down this morning. I don't know a lot but they are ok and being treated at MCV. We will let you know once we hear anything new. Thanks for all of the kind thoughts."

The Southside Sentinel reported that the fire destroyed the the couple's home, The Burton House, which was built in the 1880s. The newspaper reported that a home next door had minimal damage.

Firefighters had to deal with freezing hoses since low temperatures were the coldest of the winter thus far, dropping below zero in some locations.

Officials said fire crews were still on the scene as of 3 p.m.

There has been no word yet on what sparked the fire.