RICHMOND, Va. -- Police are looking for the man accused of threatening a 7-Eleven worker in downtown Richmond.

The incident  was captured on store security cameras on Monday, Nov. 6, at about 5:38 a.m.

"The suspect walked into the 7-Eleven, located at 1001 E. Main Street, asking for cigarillos. The victim asked the suspect for identification and after going back and forth, the suspect threw his ID on the counter," a Richmond Police spokesperson said. "The victim then told the suspect to leave. After refusing, he pulled out a firearm and stated 'b**ches like you, I’ll shoot.'"

The suspect, described by police as a black male in his early 20’s and approximately 5’5” feet tall, ran out of the store. 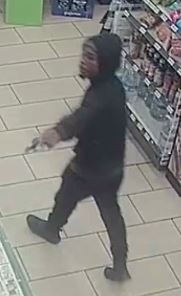 He was last seen wearing a black zipped up hoodie with headphones on, dark pants and black shoes.