CHESTERFIELD COUNTY, Va. — Police are asking for the public’s help to identify a woman wanted for robbing a bank in Chesterfield County Thursday morning.

Chesterfield Police said the crime happened at the Wells Fargo bank at 9601 Amberdale Drive around 11:30 a.m.

Police said the woman walked up to a teller and handed over a note demanding money before making off with an undisclosed amount of cash. 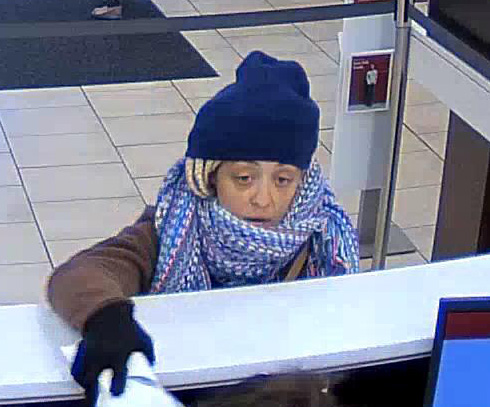 Officials said no weapon was displayed and that no one was injured.

The suspect is described as a black female with a slender build about 5 feet 6 inches tall and weighing 130 pounds. She had blond braided hair and was last seen wearing a brown jacket, dark-colored pants, a blue hat, a multi-colored scarf, black gloves and black-and-white sneakers. She was carrying a multi-colored purse.

SHARE on social media to SPREAD the WORD!
37.446905 -77.572930
Copyright 2022 Scripps Media, Inc. All rights reserved. This material may not be published, broadcast, rewritten, or redistributed.