Melania Trump donates her inaugural gown to the Smithsonian

US First Lady Melania Trump stands alongside the gown she wore to the 2017 inaugural balls as she donates the dress to the Smithsonian’s First Ladies Collection at the Smithsonian National Museum of American History in Washington, DC, October 20, 2017. / AFP PHOTO / SAUL LOEB (Photo credit should read SAUL LOEB/AFP/Getty Images)

First lady Melania Trump conveyed her love for her new life in Washington during a speech at a ceremony where she donated her inaugural ballgown to the Smithsonian’s National Museum of American History.

“As most of you know, before he ran for president, my husband was never in politics. So you can imagine that after he won, we were very busy,” Trump said in a speech full of personal anecdotes. “To be honest, what I would wear to the inaugural ball was the last thing on my mind.”

“This piece is one of the many new beginnings of our family’s history here in Washington. The President, Barron and I all love it here,” she added.

“Since then, it’s become the custom for the Smithsonian to make the donation request, and for the first lady to give her gown for the public to view,” Graddy said. 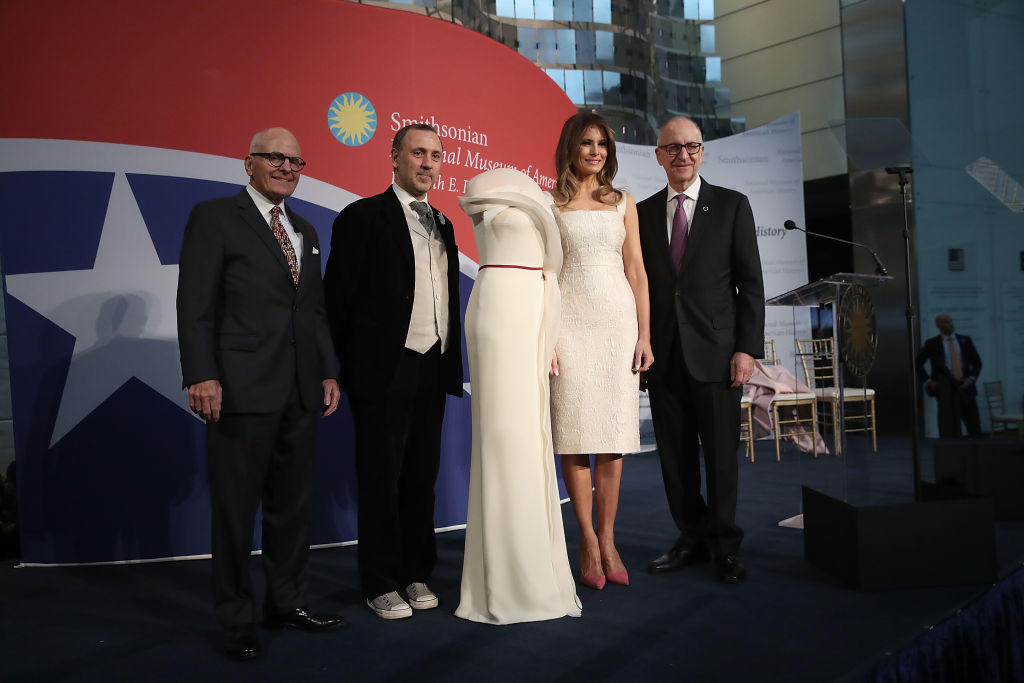 Shortly after inauguration, the Smithsonian’s conservators begin to work with the White House to ensure the donation process is smooth; they even go so far as to craft a mannequin made to resemble the first lady’s physique as closely as possible.

“Mrs. Trump had a passion for design starting at very young age, and had a very precise idea of what she wanted to wear for the historic evening,” Trump’s communications director Stephanie Grisham told CNN. “She is honored to be able to donate her couture piece to such an iconic exhibit at the Smithsonian.”

Trump’s ivory, silk crepe column gown, with a slit in the skirt and ruffle accent, will become a part of one of the museum’s most popular exhibitions — in 2016, more than four million visitors passed through the First Ladies Collection.

The designer of Trump’s gown, Hervé Pierre, was also in attendance on Friday. Pierre was formerly creative director for Carolina Herrera, the iconic American designer whose dresses were often worn by first ladies Michelle Obama and Laura Bush.

Trump did not have a personal relationship with Pierre before asking him to design her inaugural gown.

“When sitting down with Hervé to discuss her vision, the first lady knew she wanted a modern, light, unique and unexpected look,” Grisham told CNN.

In an interview last month with The New York Times, Pierre said Trump first reached out to him on January 3, just 17 days before inauguration.

“She gave me a couple of key words. She didn’t want a big ball gown, she wanted something sleek, ivory, vanilla. It had to be really, really right because it was going to be part of history — part of this country’s history but also part of what I will have achieved on earth. I’ve designed thousands of dresses, but people will remember this one most particularly,” he said.

Trump has since worn custom-made Pierre designs a handful of times as first lady, most notably in May, departing from the South Lawn of the White House en route to Saudi Arabia, in an orange leather skirt and cream sweater.

And in July, at a private Eiffel Tower dinner with President Donald Trump and French President Emmanuel Macron and his wife, Brigitte, in Paris, Pierre designed a red, white and blue dress with embellishments on the bodice meant to represent wheat.

Trump’s gown had little of the glitz and drama of past first lady inaugural designs, though it was chic in its simplicity, with its off-the-shoulder neckline and a skinny, red belt as the only pop of color. By contrast, Hillary Clinton’s 1993 inaugural gown was a purple lace and sequins number by Sarah Phillips, with long sleeves, a belt and a sheer overlay skirt.

Trump’s predecessor, Michelle Obama, ushered in a new era of modern inaugural ball style, opting for designer Jason Wu for both of her husband’s inaugural celebrations. The first, in 2009, was a flowing, white, one-shoulder gown with floral appliqué, the second, a bold red gown made of chiffon and velvet.

Obama and designer Jason Wu look at a display of her inaugural gown at the Smithsonian’s National Museum of American History.

The white Wu is part of the Smithsonian collection, which, with the addition of Trump’s dress this week, will bring to 27 the total number of dresses, and more than 160 other first lady clothing items and accessories.

“(The first ladies) are all so gracious about the donation process,” Graddy said. “It must be sort of a strange thing to basically come to a museum and see yourself, your dress, encased in the Smithsonian, as you become a part of history.”