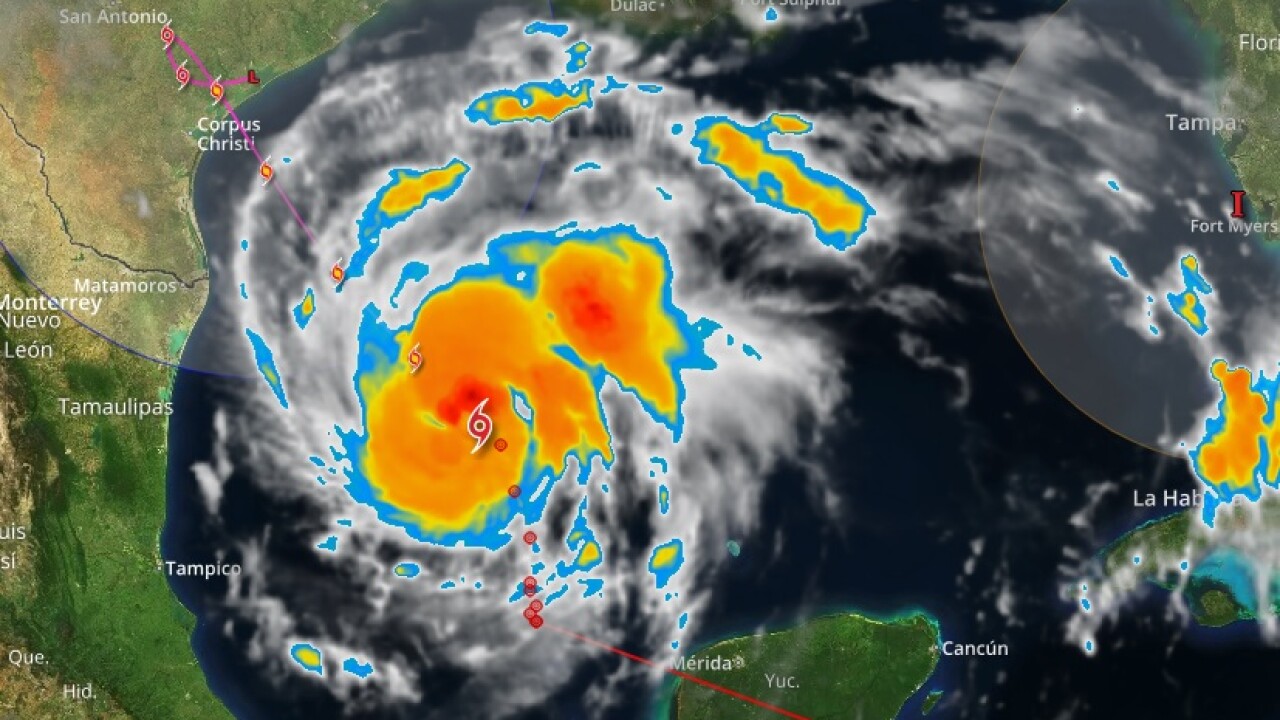 Tropical Storm Harvey is rapidly strengthening and is now forecast to become a major hurricane when it hits the middle Texas coast, the National Hurricane Center said late Thursday morning.

It could be a Category 3 hurricane with winds of at least 111 mph, according to the center. Previously, the storm was projected to reach Category 1 status.

Texans are filling sandbags, stocking up on water and boarding up windows ahead of Harvey, and while hurricane-force winds are a concern as the storm rebuilds strength in the Gulf of Mexico, its potential deluge and subsequent flooding may be a big danger as well, according to meteorologists.

The system weakened before reaching tropical storm status early Thursday and is expected to make landfall late Friday or early Saturday in Corpus Christi, Texas, then stall over the state, the hurricane center said.

“Harvey is likely to bring multiple hazards, including heavy rainfall, storm surge, and possible hurricane conditions to portions of the Texas coast beginning on Friday,” the weather service said.

As of 11 a.m. ET, Harvey remained a tropical storm, with 65-mph winds. It was about 380 miles southeast of Port O’Connor Texas, and was moving north-northwest at 10 mph.

It’s expected to bring 12 to 20 inches of rain — with isolated instances where rainfall totals could reach 30 inches — to the Texas coast, the service said.

Rainfall amounts increase exponentially when a storm moves at a slower speed, as Harvey’s been doing. Earlier this week, the National Hurricane Center warned, “The system is likely to slow down once it reaches the coast, increasing the threat of a prolonged period of heavy rain and flooding across portions of Texas, southwest Louisiana, and northeastern Mexico into early next week.”

Compounding potential problems is the tidal cycle. If peak storm surge arrives during high tide, parts of the coast could see 2 to 7 feet of flooding, with the potential of 6 to 10 feet between Padre Island National Seashore and Sargent, Texas.

While it has been nine years since Texas last saw a hurricane, the state is no stranger to devastating flooding from tropical systems. In 2001, Tropical Storm Allison was a multibillion-dollar disaster for the state, specifically Houston. Allison became nearly stationary for days, dropping more than 30 inches of rain across portions of the city.

A hurricane watch is in effect from north of Port Mansfield to the mouth of the Rio Grande, with a storm surge watch stretching north to High Island, on Galveston Bay.

Harvey could be the first hurricane to hit Texas since 2008 when Hurricane Ike smashed the coast near Galveston. The storm killed 21 people in Texas, Louisiana and Arkansas, and caused widespread destruction.

‘It scares the hell out of people’

As Harvey churned toward Texas, Gov. Greg Abbott declared a state of disaster Wednesday in 30 counties along the Gulf of Mexico. The governor’s action allows agencies to “quickly deploy resources for the emergency response.”

“Texans believe in taking action and always being prepared in the event of an emergency,” Abbott said. “That is why I am taking every precaution prior to … Harvey making landfall.”

Students and staff at the Texas A&M campus at Corpus Christi are under a mandatory evacuation order. The campus will be closed starting Thursday, according to the university’s website.

People around Corpus Christi started stocking up Wednesday on food, bottled water and other essentials.

“We know that if anything as far as flooding happens, that’s the one thing everyone runs to, we have to have water,” Mariah Barter told CNN affiliate KZTV. “It’s a big deal. It scares the hell out of people. It’s better to be prepared.”

Others in South Texas readied sandbags, fueled up power generators and bought plywood to board up their windows, CNN affiliate KRIS reported.