CHARLOTTESVILLE, Va. -- A 47-year-old man was arrested after he allegedly spit on the organizer of the "Unite the Right" rally in Charlottesville Sunday afternoon.

Officials said Robert K. Litzenberger of Charlottesville was charged with misdemeanor assault and battery after a state trooper witnessed Litzenberger spit on Jason Kessler as he was walking away from a news conference that turned chaotic.

State police officials said that because the charge was a misdemeanor, Litzenberger was released on an unsecured bond.

Kessler attempted to address the growing  crowd at 2 p.m., but was chased away from the microphone amid chants that he be indicted for murder.

The "Unite the Right" rally organizer stood at the microphone next to a memorial  installed minutes earlier in memory of the lives lost at Saturday’s rally, but was only able to utter a few sentences before the crowd took over.

Police could be seen on the perimeter, flanking Kessler, who told the crowd he “would wait just a few more minutes to begin.”

The crowd was already chanting and blowing an air horn before he began to speak.

Kessler said he wanted to tell the public what really happened, before “a narrative continued to spin out of control.” 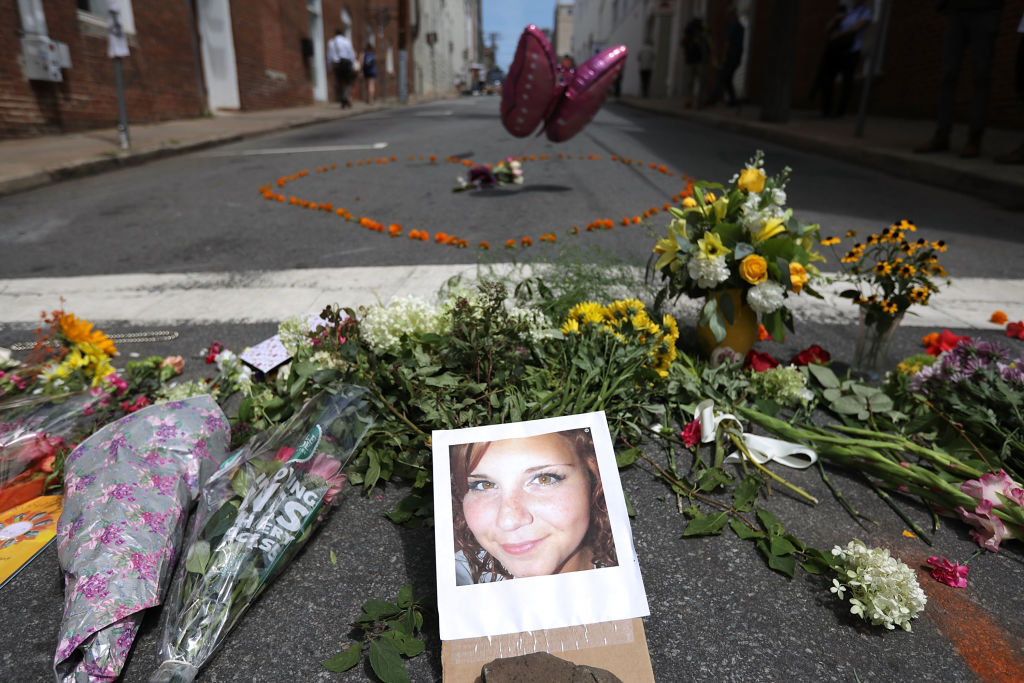 He did not start with mention of the three victims who died in connection to the rally: 32-year-old Heather Heyer, who was run over by a demonstrator, and Virginia State Police officers Lieutenant H. Jay Cullen and Trooper-Pilot Berke M.M. Bates.

Kessler began gesturing at the gathered crowd and said the same crowd that could be heard booing him were the ones who fueled the violence. He then blamed the Charlottesville Police officers, who he said “refused to do their job” and failed to “follow through with security arrangements” that protected protesters and counter protesters.

As he continued to blame multiple parties, the assembled crowd – who he said were “anti-white” -- grew louder.

He then talked about the legitimacy of his permit, and the court injunction that occurred late Friday night. Kessler was represented by the ACLU and they won the right for the rally to be held at the Emancipation Park, though police had tried to move, for safety reasons, the event over to a larger staging area.

Kessler said previously that symbolism would be lost if they were not at the park where earlier in the spring City Council voted to remove a Confederate statue.

After blaming a lot of people, Kessler then condemned “any violence” that happened Saturday. “I disavow anything that led to folks getting hurt. It really is a sad day in our constitutional democracy when we are not able to have civil liberties like the First Amendment – that leads to rational discussion --that is what leads to ideas breaking down and people resorting to violence.”

At that point, the crowds chanting profanity grew louder and a man walked up to Kessler with both his middle fingers extended.

Other people rushed forward and Kessler was swept away in a sea of media and demonstrators where the chants “indict for murder now” and “he invited these people” could be heard.

Kessler yelled one more thing before completely disappearing: “I’ll be in Washington tomorrow.”

He was escorted away by the police.

Richard Spencer, one of the co-organizers of the event, declined to appear at today’s press conference. There is one slated for Washington D.C. on Monday, where speakers from the canceled event will also be present.