HENRICO, Va. — With new locations upcoming in Shockoe Bottom, the Fan and downtown, a busy local restaurateur has pulled the curtain off a new venture in Short Pump.

At 6,000 square feet, Red Salt is one of the largest restaurants in the development, which includes Mellow Mushroom and two restaurants from Richmond Restaurant Group set to open this year.

“It’s a fitting concept for the area,” Tsui said. 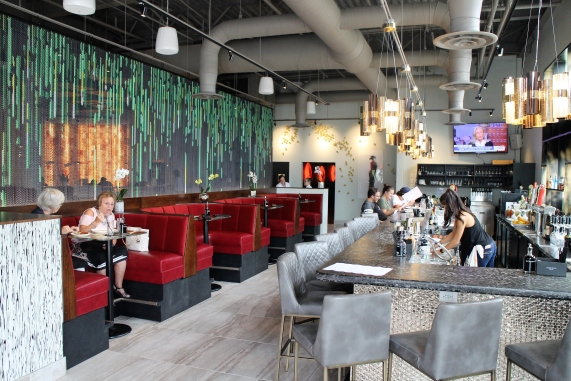 The space was designed by local designer Patricia Holley. Richmond-based private equity firm Markel | Eagle Partners, the developer of GreenGate, served as general contractor. Tsui would not say how much he invested in the new restaurant.

Red Salt’s name, menu and interior design were developed around a theme of Himalayan salt, a pink salt that is one of the purest on Earth and used to cure sushi and season steak.

As soon as patrons walk into Red Salt, they will notice an illuminated Himalayan salt wall surrounded by a sushi prep station, as well as large booths.

A wine room and two private dining rooms can seat 20 and 50 people, respectively. Tsui said a dividing wall separating the two can be removed to accommodate a maximum of 70 patrons. To add more privacy to the rooms, he’s installing electrostatic glass on the doors in a couple months, where flipping a switch frosts the glass.