Dog with VCU professor killed during run is safe: ‘She was light of his life’

RICHMOND, Va. --The pet of retired VCU professor Richard Priebe, who was fatally struck by while out for a morning run in Richmond's Fan neighborhood on Friday, was found safe and reunited with family members two days after the dog disappeared.

Priebe's dog, "Rose," was with him at the time of the accident and vanished shortly thereafter. It is believed the pair were likely on the way to a park that morning, according to Priebe's son, Adam.

David Battiston was on his way to the gym Sunday morning when he spotted a dog near the Fan.
"I saw a yellow lab running across Broad Street with a leash attached to it," he said. "She looked scared, and she was moving pretty quick."

That dog Rose was with Priebe at approximately 6:01 a.m. Friday when police said he entered the intersection at W. Main St. without stopping and was struck by the vehicle traveling westbound on W. Main St.

"I believe he was probably going to a park where he normally threw the ball for her," said Adam Priebe, Richard's son.
Word quickly got out that the dog was missing.

Rose was very important to Richard," said Janet Velenovsky, who trained Rose. "As a retired person and a widower, she was his companion and really the light of his life."

A search party was formed Sunday morning where there had been sightings of the dog.

"We were texting each other back and forth like she's at Grove and Vine right now heading northwest," said Tracy McNeish, who helped in the search. "We were talking to passerby and cyclists."

However, it was Battiston who ultimately found "Rose." He told CBS 6 he initially had no idea about her story.

"I was going to take the dog to the house and then I looked on social media and my friends were saying, 'I think you have this dog,'" he said.

Thanks to Battiston, "Rose" was able to undergo observation for a few medical issues at The Veterinary Emergency Specialty Center in Caryown, and reunited with friends and family. 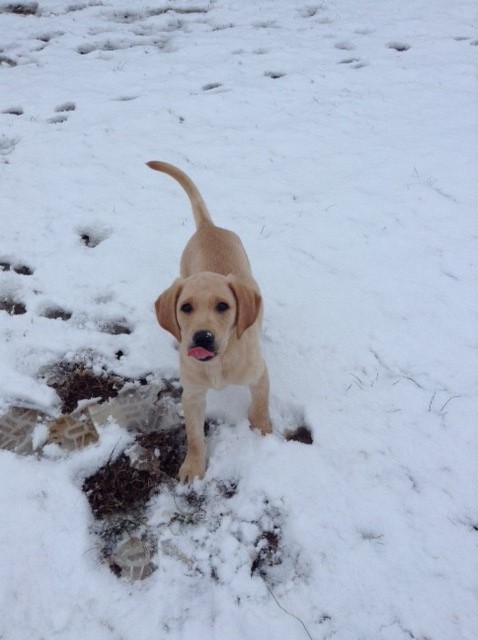 "He was very attached to her," said Adam Priebe. "He'd only had her for about a year, but it meant a lot to him to have that bond with the dog."

Rose will now be heading to Atlanta to live with Adam Priebe and his wife.

The two are overwhelmed with the support from the community over these past few days.

"It meant a lot to have everybody in the community out looking for her," he said. "And also just to know how important [my father] and how much of an impact he had on so many people's lives."

"Rose" plays with her ball.

Charges, if any, are still to be determined, pending the completion of the investigation and consultation with the Commonwealth’s Attorney’s Office.