RICHMOND, Va. -- The pet of former VCU professor Richard Priebe, who was fatally struck by a car while out for a morning run in Richmond's Fan neighborhood on Friday, was found Sunday morning.

Priebe's dog, Rose, was with him at the time of the accident and went missing shortly thereafter. It is believed the pair were likely on the way to a park that morning, according to Priebe's son, Adam. 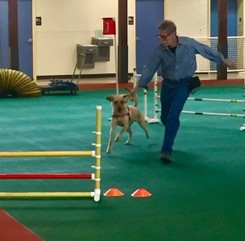 Search parties organized an effort on Facebook to find Rose and went looking for her around 7 a.m. Sunday morning. According to the group's Facebook page, a man found her a little after 8:30 a.m. and she was taken to a local veterinarian to be examined.

Adam has told CBS 6 that he is thankful for the support of the community and that Rose will soon be headed to Atlanta to live with him and his wife, who own two other dogs.