Mike Tidwell, a member of the Potomac Appalachian Trail Club, said the Atlantic Coast Pipeline and Mountain Valley Pipeline would cut through “the Appalachian Trail in two places, causing serious, serious impacts to that trail – and that’s why we’re here today to ask the governor to change course.”

He said hikers seek two things: water and mountain vistas. Both are threatened by the pipelines, said Tidwell, who attended the demonstration with other trail enthusiasts, all dressed in full hiking gear from backpacks to boots.

Dominion Resources and other companies hope to build the Atlantic Coast Pipeline, which would stretch 600 miles underground from West Virginia to North Carolina. The project would require the removal of 38 miles of mountaintops near the Appalachian Trail, opponents say.

According to Dominion, the Atlantic Coast Pipeline would benefit the economy and the environment and would generate thousands of jobs in the mid-Atlantic region. McAuliffe has supported the project since it was unveiled in 2014. “We’re talking jobs, economic development, and it’s good for the environment,” McAuliffe said at the time. 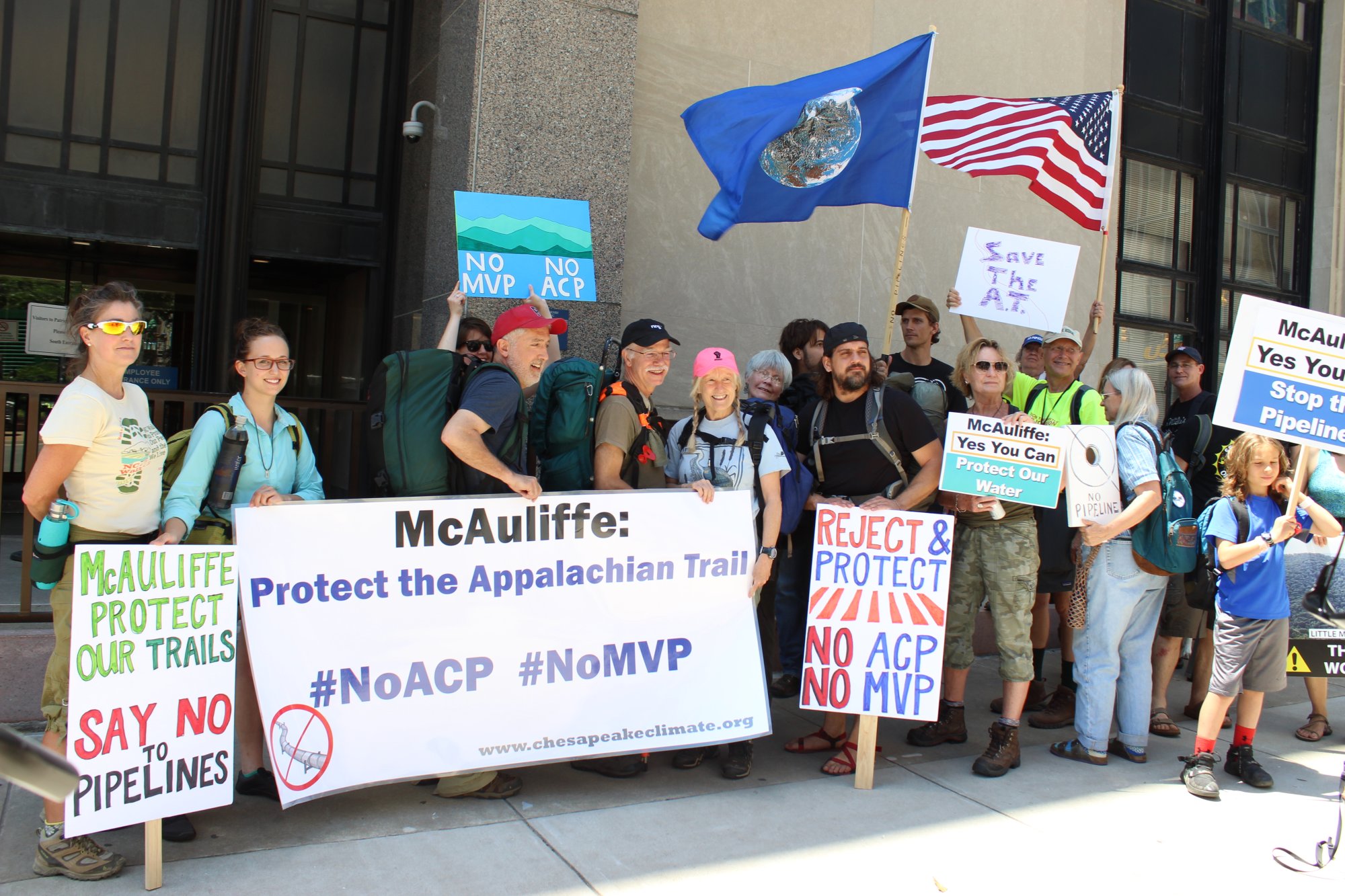 Although supporters say the pipelines would help provide clean electricity from natural gas, many environmentalists say the projects are flawed.

“The Mountain Valley Pipeline and the Atlantic Coast Pipeline are both unnecessary and dangerous projects and would be irreversibly traumatic to Virginia’s landscape,” said Jessica Sims, a hiker from Midlothian. “The pristine historic and celebrated beauty of the Appalachian Trail should not be sacrificed to corporations pushing dangerous, short-term projects.”

Friday’s demonstration was organized by the Chesapeake Climate Action Network. The group says the pipelines “would severely harm the iconic trail.” The network also opposes the pipelines because they would carry natural gas released by hydraulic fracturing. The organization says fracking, which involves injecting water and chemicals into the ground, hurts the environment.

One of the speakers at the protest was Lorne Stockman of Staunton, a senior research analyst for Oil Change International, an advocacy group whose mission is “exposing the true costs of fossil fuels.”

Kathleen “Kit” Johnston, a retired journalist who lives in Madison County, also railed against the pipelines.

“As an advocate for the environment, the climate and the people, I say no to cutting hundreds of miles of pipeline through people’s backyards, farms, gardens and under through and on top of our mountains, waters and forests,” Johnston told the crowd.

Charlie Garlow, a retired attorney for the U.S. Environmental Protection Agency, said there are alternatives to the pipelines.

“We need to invest less in polluting infrastructure for pipelines and invest more of our resources into clean, renewable, solar, wind and other clean energies,” said Garlow, who has hiked most of the Appalachian Trail.

The protest began at the Bell Tower on the grounds of the Virginia Capitol. From there, the hikers marched to the governor’s office in the Patrick Henry Building, chanting “Whose trail? Our trail!” and “Can’t stop! Won’t stop!”

At the governor’s office, a protester named Clay Barnes handed a letter from the “Virginia Hikers of the Appalachian Trail” to a McAuliffe representative.

Barnes and Lee Williams, a member of the Richmond Interfaith Climate Justice League, also gave the governor’s representative a basket containing dozens of compasses – the kind hikers use on the trail.

Why compasses for McAuliffe? “To help him find his way on this issue,” Williams said.

By Chelsea Jackson and Will Thomas with Capital News Service