Armed officers responding to the London Bridge terror attack fired an “unprecedented” number of rounds at the three attackers because they were wearing what appeared to be suicide belts, police said.

The suicide belts were later determined to be fake, suggesting the attackers deliberately used the belts to ensure they would be killed. Rowley said he was “not surprised” at the police response.

Seven people died and 48 were injured when three men drove a van into pedestrians on London Bridge before leaping out and launching a stabbing spree in nearby bars and restaurants.

The ISIS-linked Amaq Agency claimed a “detachment of Islamic State fighters” carried out the attack, but CNN terrorism analyst Paul Cruickshank cautioned that ISIS has provided no evidence to back up its claim. Amaq also claimed ISIS was behind the attack at a resort in Manila last week, despite Filipino authorities asserting it was not terror-related.

British Prime Minister Theresa May claimed there was “too much tolerance” of Islamist extremism in the United Kingdom as she vowed a clampdown in the wake of the third terror attack to hit the UK this year. 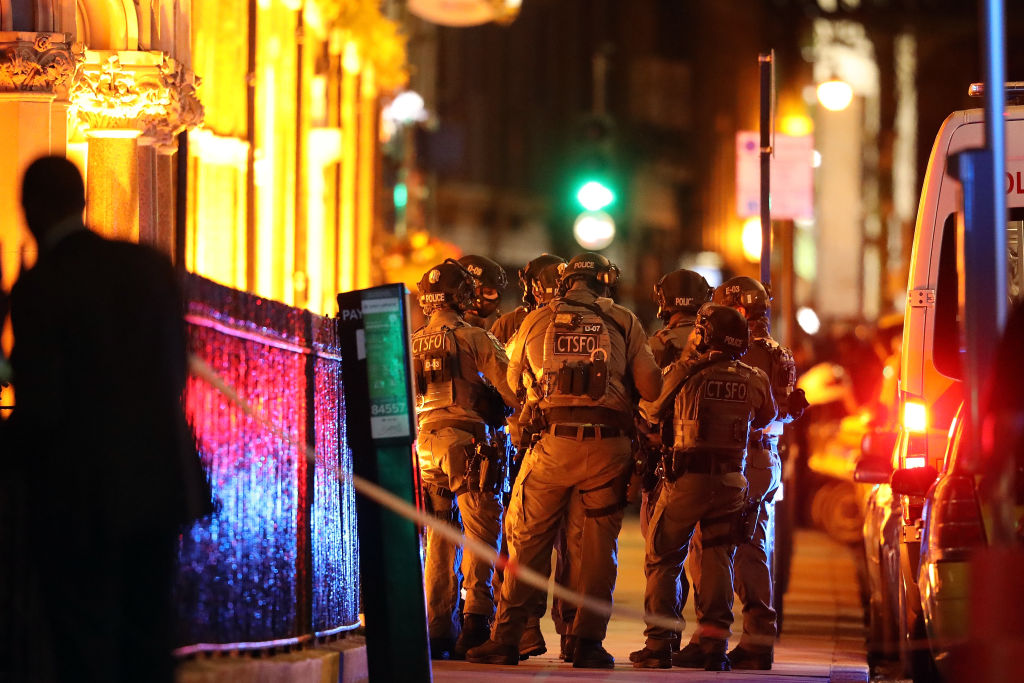 — A large area south of London Bridge was cordoned off as intense police investigation continues.

— Thirty-six victims were still being treated in London hospitals Sunday, with 21 in a critical condition.

— Police carried out raids Sunday morning in Barking, east London, arresting 12 people, one of whom has been released.

Police arrested 12 people Sunday after carrying out raids in Barking, east London. One of those arrested, a 55-year-old man, was released without having to post bond, Rowley said.

Eleven of the 12 people — five men and six women, ranging in age from 19 to 60 — were arrested at one complex in Barking.

Neighbors described one man whose apartment was raided as a quiet family man. The man kept to himself, and his behavior raised no alarm bells, neighbors said.

But he aroused the suspicions of one neighbor.

“All of a sudden we saw this individual speaking to the kids about Islam and showing them how to pray. I could see them from my window,” Erica Gasperri said.

Gasperri said she confronted the man and went to the police with her concerns, but she said little was done.

All those arrested were detained under Britain’s Terrorism Act, Rowley said.

Ikenna Chigbo, in an interview with Britain’s Independent Television News, described one of those arrested in the Barking raids as a nice guy who regularly invited neighbors to barbecues and played football and table tennis with them.

“Yesterday — I’m actually in the process of moving home at the moment — I hired a van moving some bits. He came to me. He was a little bit overnice,” Chigbo told the station. “He said to me, ‘Where can I get a van like that?’ Asking me all the details like how much was it, where he could get a van — basically because, he said to me, ‘I might be moving shortly with my family as well.'”

Police also confirmed Sunday that 36 people remain in the hospital with 21 of those in critical condition.

Rowley described the scene faced by officers when they arrived at Borough Market on Saturday night and explained why they used 50 rounds of bullets.

“The situation these officers were confronted with was critical, a matter of life and death. Three armed men, wearing what appeared to be suicide belts, had already attacked and killed members of the public and had to be stopped immediately,” he said.

Rowley paid tribute to a transport police officer who ran toward the assailants armed only with his baton.

He also confirmed that a member of the public suffered a gunshot wound during the shooting. His condition was not life-threatening.

Earlier Sunday, May insisted that while the recent attacks in Westminster, Manchester and London Bridge were unconnected, they were bound together by the “single evil ideology of Islamist extremism.”

She also said that while progress had been made, there remained “far too much tolerance of extremism in our country.”

Speaking at Downing Street five days before the UK general election, May described the latest attack as “brutal” and said extremism had to be defeated. “We cannot and must not pretend that things can continue as they are,” she said. “Enough is enough.”

May said that Britain’s counterterrorism strategy would be reviewed, and warned that the Internet could no longer remain a “safe space” for extremists.

‘This bloodshed must end’

President Trump on Sunday made reference to the attack during comments at an event at Ford’s Theatre in Washington.

“This bloodshed must end. This bloodshed will end. As president, I will do what is necessary to prevent this threat from spreading to our shores,” Trump said.

He called the incident a “horrific terrorist attack on the people of London,” and said he expressed “our unwavering support” in a call with May.

The President said the United States will do everything in its power to “bring those that are guilty to justice.”

‘Bodies in the road’

The attack began late Saturday night, when a white Renault rental van swerved into crowds of pedestrians on London Bridge, leaving bodies lying in the roadway, according to witnesses. At least one pedestrian is thought to have jumped into the Thames to escape being hit.

The suspects are then believed to have jumped from the van and proceeded on foot toward the nearby area of Borough Market, one of the capital’s most popular nightlife spots.

“Borough Market is in the heart of a strong, diverse and creative community, a community that supports each other and will pull together to show solidarity in the face of this callous attack, ” Donald Hyslop, chairman of the Borough Market trustees, said in a statement.

Eyewitnesses spoke of panic as three men armed with “footlong” knives burst into packed restaurants and cafes, indiscriminately slashing at those inside. Many customers fought off the attackers, using chairs, pint glasses and bottles. Others hid behind tables and inside bathrooms, or attempted to flee.

Stories of the wounded

One of those hurt in the attack was Australian Candice Hedge, who was stabbed in the neck, her mother told CNN Sunday. Kimberley Del Toro said her daughter had been unable to speak since she was wounded.

“I was able to Skype with her and she gave me a thumbs up. Thank God no major artery was cut. It could have been much worse,” she told CNN, adding that Hedge’s boyfriend was at her bedside.

Daniel O’Neill, 23, also remains in the hospital after being stabbed, his mother said. His friend applied a tourniquet, she said, explaining she’d like to find the two police officers who helped stem his bleeding and transported him to the hospital.

“Two police officers remained in the back with him, and they had him lined across them and they placed pressure on the wounds and I’m trying to find those police officers now to say thank you,” she told CNN.

French and Australian nationals have been confirmed by their respective governments as among those caught up in the attack. A US State Department official said the department was not aware of any Americans killed. The Canadian government identified one of the victims as citizen Chrissy Archibald. The woman’s family said she had been working in a homeless shelter until she could move to Europe to be with her fiance.

“She would have had no understanding of the callous cruelty that caused her death. Please honor her by making your community a better place,” the family statement said.

The second terrorist attack in London this year is sure to renew the debate around safety in the capital.

London Mayor Sadiq Khan praised the quick police response and asked Londoners to remain calm but vigilant. He repeated his previous insistence that “London is one of the safest global cities in the world.”

“One of the reasons we’re kept safe is because of the hard work of our police and emergency services,” Khan told CNN. “Over the next few days, Londoners and visitors will be seeing an increased police presence. That will include increased armed officers.”

For many in London, Saturday’s attack will be a grim reminder of the events on Westminster Bridge on March 22, when Khalid Masood drove a car into pedestrians, killing four and injuring 50, before stabbing a police officer to death at the entrance to parliament. The attacker — who reportedly had a criminal record and may have had connections to violent extremism — was gunned down by a police officer.

The attack also comes fewer than two weeks after Salman Abedi, a suicide bomber, killed 22 people at an Ariana Grande concert in Manchester.

Authorities confirmed that there would be no change in the threat level, which is currently set at “severe,” one below the highest level of “critical”.

The attack began just after 10 p.m. on London Bridge, just north of an area replete with cafes and bars, and near the London Bridge rail and underground interchange.

Witness Mark Roberts, who was on the bridge at the time of the attack, told CNN the van was traveling south across the River Thames at a high rate of speed and was swerving as it struck several people, knocking one person “about 20 feet into the air.”

The van swerved into oncoming lanes before hitting a bus stop and coming to a stop, Roberts said.

“Within my line of sight, there were five or six people on the ground that were not moving,” he said. “It looked to me that the van was aiming at the people.”

Witnesses at the Elliot restaurant in Borough Market described seeing large groups of people running up the street as it became apparent an attack was underway.

“Someone said, ‘What is going on?’ and one of the people running said, ‘There is a man with a knife up there and he is coming this way.’ There was complete panic as everyone ran to the back of the restaurant and crouched down trying to hide themselves from view,” one witness told CNN.

“A man suddenly appeared in the restaurant with a massive knife. … (He) stabbed a waitress, who was hiding behind a partition, in the neck and stabbed a man in the back before running out of the restaurant,” the witness added.

Another witness said a masked man entered the nearby El Pastor restaurant and slashed a woman in the side with a knife.

Police activity spread throughout the Borough Market area. Officers rushed into the nearby Katzenjammers bar and ordered people to sit on the floor, patron Paul Connell told CNN.

“The police were absolutely brilliant. They came in and explained the situation,” said Connell. “Armed police came in. They told us to remain on the floor but to stay calm. We were eventually led out of the bar and some kind people working in a hotel let us come in to use the bathroom and to give us water.”