Dashcam video showing Tiger Woods’ Memorial Day encounter with police was made available to the media Wednesday, shedding more light on the golfer’s arrest on suspicion of driving under the influence.

One recording shows a Jupiter, Florida police officer giving Woods a field sobriety test. Before they start, Woods puts his right foot on the hood of the officer’s car, and spends some time tying his shoe. Woods is wearing shorts, a dark hat and a light-colored shirt.

At one point the officer asks him, “Are you alright?” then tells him he can do the tests without shoes.

Woods then walks unsteadily through the frame. He returns to begin the tests.

The officer asks him if he has been drinking, and he says no.

When asked whether he had been taking medications, he says yes and the officer asks which ones. Woods’ answer is muted in the recording. 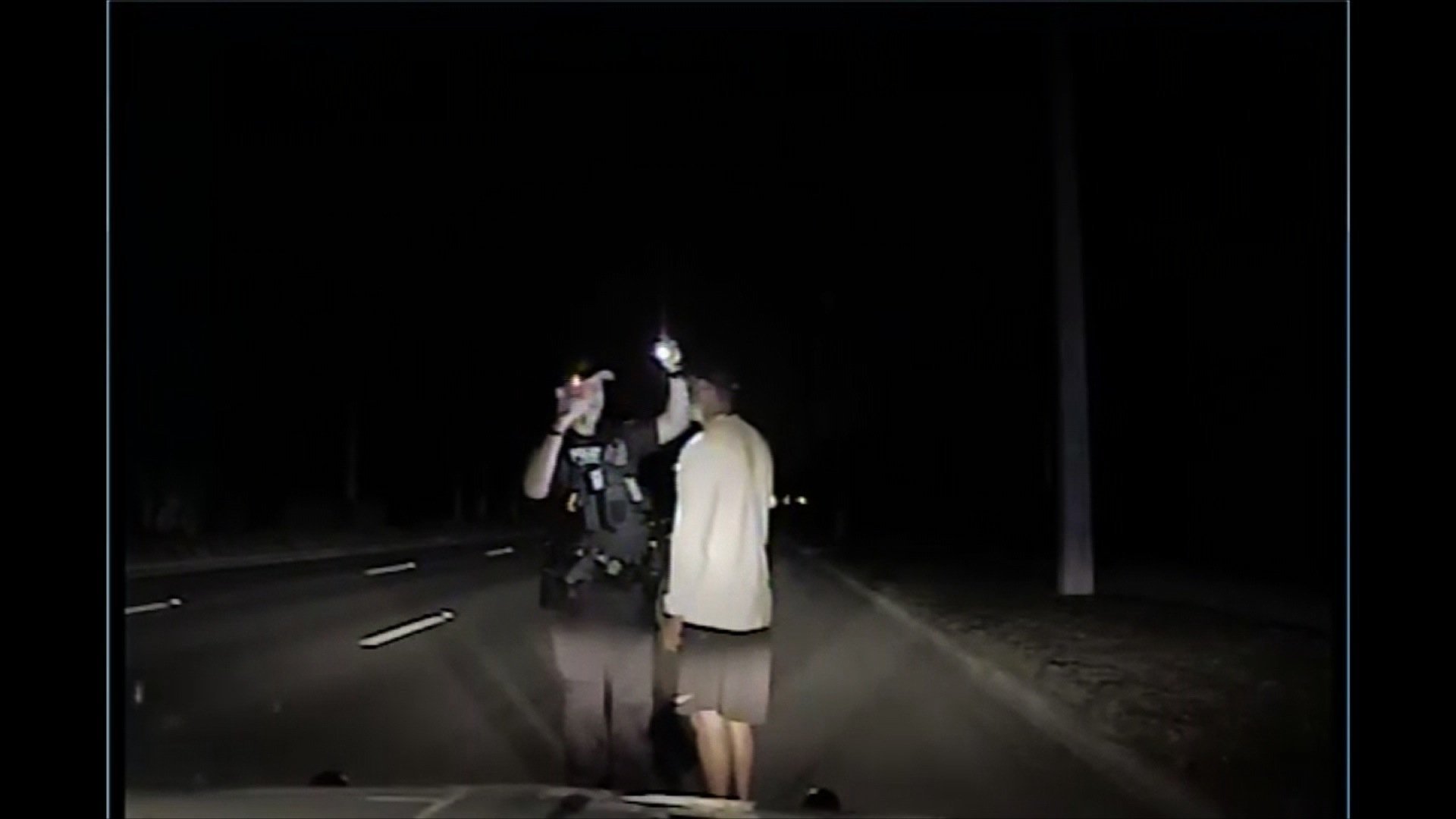 The officer performs a test in which he asks Woods to follow a red light with his eyes.

He moves the light but stops and says, “You’re not even looking at the light.”

Woods tells the officer he is.

“I’m following the light,” Woods says, his words running together.

Woods also has trouble walking the white line that separates the bike lane from the other lanes and following directions for reciting the alphabet. At one point he starts to walk away, then stumbles back, saying, “What are we doing?”

About 24 minutes into the video, Woods is asked to put his hands behind his back and is handcuffed.

Another video of the initial traffic stop shows the view out the front of an officer’s car as he pulls up to Woods’ car, which is almost halfway out of the right lane, sticking into a bike lane.

The brake lights of Woods’ 2015 Mercedes-Benz AMG 65 are lit and the right turn signal is blinking. Officer Matthew Palladino approaches the car on the passengers’ side. With his flashlight lit, he apparently checks out damage to the car.

Another officer eventually joins Palladino, who begins to question Woods.

You can hear Woods answering the officer’s questions.

“Where are you headed to?” Palladino asks.

“You know we’re in Jupiter?” the officer responds.

Woods replies that he is going to his house.

According to documents released Tuesday, police discovered Woods early Monday on the side of the road with his Mercedes-Benz running. His car showed signs of “fresh damage” on the driver’s side of the vehicle, according to the records. He was by himself and wearing his seat belt.

One of the reports said Woods had to be awakened and that his speech was slow and slurred but that he was “cooperative.”

A report said Woods also told police he “takes several prescriptions.” He took a Breathalyzer test, registering 0.000 on it both times, and a urine test, records show.

On Monday, Woods said in a statement to CNN and other media outlets that alcohol was not involved and that he had “an unexpected reaction to prescribed medications.” Woods, who has been rehabbing from back surgery, said he did not realize the mix of medications “had affected me so strongly.”

“I understand the severity of what I did and I take full responsibility for my actions,” he said.

Woods was arrested about 3 a.m., booked into jail and released on his own recognizance with no bond a few hours later, according to records. He was cited for DUI and improper parking; his arraignment date is July 5.

In his statement, Woods apologized to family, friends and fans. “I will do everything in my power to ensure this never happens again.”

Woods hopes to return to golf

Woods has won 14 major tournaments, second only to Jack Nicklaus. But the 41-year-old golfer has undergone multiple back surgeries and hasn’t played competitive golf since he was forced to pull out of the Dubai Desert Classic in February. He has expressed a desire to continue to play professionally despite his recent history of injuries.

He underwent fusion surgery on his back more than a month ago, his fourth operation since 2014. Woods said in a blog post published last week that “it was instant nerve relief.”

“I haven’t felt this good in years,” he said.

Woods also said in the post that his long-term prognosis for returning to professional golf is positive but that he won’t be able to twist his back for another two to three months.