RICHMOND, Va. -- Police are investigating a shooting that took place Tuesday morning at the intersection of 3rd and East Broad Street.

An employee at a Broad Street store heard gunshots around 10:18 a.m. and ran outside to find a man lying on the ground.

"So, ​I go look right here, he's laid out right here,” said Michael Hollier. “He has a bullet wound in his shoulder.”

Veronica Wyatt, a nurse, said she saw the victim fall. 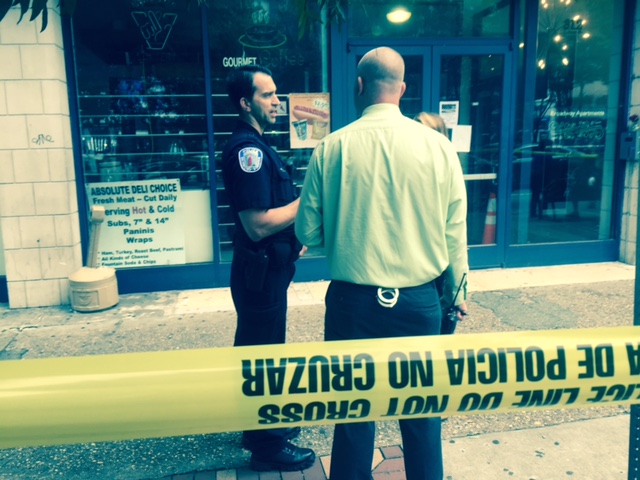 “I ran up to him took my jacket off,” Wyatt said. “I folded it up and applied it to the area where he had been shot.”

"I told him everything was going to be okay that help is on the way," said Wyatt.  "He's a really nice guy.  I see him from time to time with his daughter and his wife."

Wyatt stayed with the victim until help arrived. "I just said a prayer real quick and then I just stepped back,” she said.

"I told him everything was going to be okay that help is on the way," said Wyatt.  "He's a really nice guy.  I see him from time to time with his daughter and his wife."

Police still have not released a motive or any suspect description in this shooting. They did say the shooting was an isolated incident and they are looking for one shooting in the case.

Tuesday's shooting is across the street from a deadly shooting in 2014 where a clerk at the Victoria Jewelers was shot and killed during a robbery.

The shooter and three other men were convicted and are serving time behind bars.

“It's kind of frightening at work to see that happening right outside your door," said Hollier.

The area is adjacent to the nearby Art’s District, and is growing with new business and residents.