Todd Kohlhepp, who was arrested in November after police rescued a woman found inside a shipping container at his farm near Woodruff, also pleaded guilty in the Spartanburg County courthouse to two counts of kidnapping and one count of criminal sexual assault.

In a plea deal reached with prosecutors, Kohlhepp would avoid the death penalty and instead receive seven consecutive life sentences, plus 30 years for the sexual assault charge and 30 years for kidnapping.

The deal was read in court, where the defendant was sentenced.

Authorities say they believe Kohlhepp is responsible for the long-unsolved killings of four people at a Chesnee motorcycle shop and three other killings that they discovered only last year as they rescued the woman.

The case came together in November when authorities searched for Kala Brown, then 30, and her boyfriend Charles Carver, 32. They had been missing since August.

On November 3, investigators checking a lead that she might have visited Kohlhepp found the woman inside a shipping container on Kohlhepp’s 95-acre farm, chained by the ankle and screaming for help.

Kohlhepp wasn’t there at the time — he lived in a separate Spartanburg-area home — but eventually was arrested.

Police at the farm said they found three bodies: Carver’s, as well as those of Johnny Joe Coxie, 29, and his wife, Meagan Leigh McCraw Coxie, 25.

2003 killings at a motorcycle shop

After his arrest, Kohlhepp told investigators he had killed four people in 2003 at a motorcycle shop in Chesnee, about 15 miles north of Spartanburg, authorities said.

Owner Scott Ponder; his mother, Beverly Guy; service manager Brian Lucas; and employee Chris Sherbert were found fatally shot inside the shop back then, but the killings were unsolved until Kohlhepp’s confession, authorities said.

Kohlhepp is a registered sex offender. As a teenager living in Tempe, Arizona, he was accused of holding a 14-year-old girl at gunpoint and sexually assaulting her in 1987.

Originally, he was charged with kidnapping, sexual assault and committing a dangerous crime against children. The other charges were dropped after he pleaded guilty to kidnapping and was sentenced to 15 years in prison, according to court records obtained by CNN affiliates KPHO and KTVK. 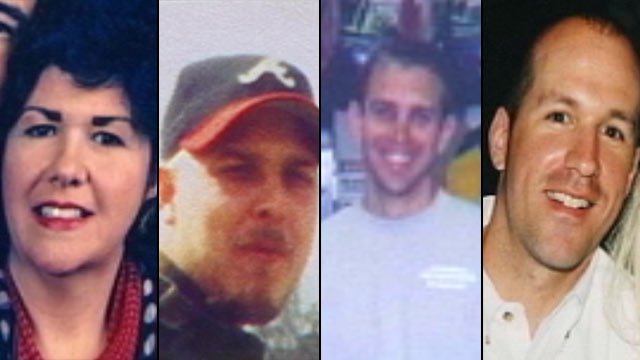 Victim: He shot my boyfriend in the chest

Kala Brown, three months after her rescue, told TV’s “Dr. Phil” that she had cleaned houses for Kohlhepp’s real estate listings, so she had no reason to fear him when she and Carver visited him at his invitation.

When they arrived on August 31, Kohlhepp asked the couple to help him clear some underbrush, and he went into a garage, ostensibly to retrieve something, Brown said.

As she and Carver waited for Kohlhepp, holding hands, Kohlhepp emerged from the garage and shot Carver three times in the chest, she said.

She tearfully recounted how Kohlhepp bound her and gagged her. She said he kept her chained in the dark container for two months.

Kohlhepp took her out of the container twice a day for about 30 to 45 minutes, Brown said. He kept her in an apartment above the garage, where she was allowed to change clothes he brought her and bathe with a bucket of water, she said.

She said he talked about building a life with her.

CNN does not normally identify sexual assault victims, but Brown has spoken to the media about her ordeal. She told “Dr. Phil” that she was raped.