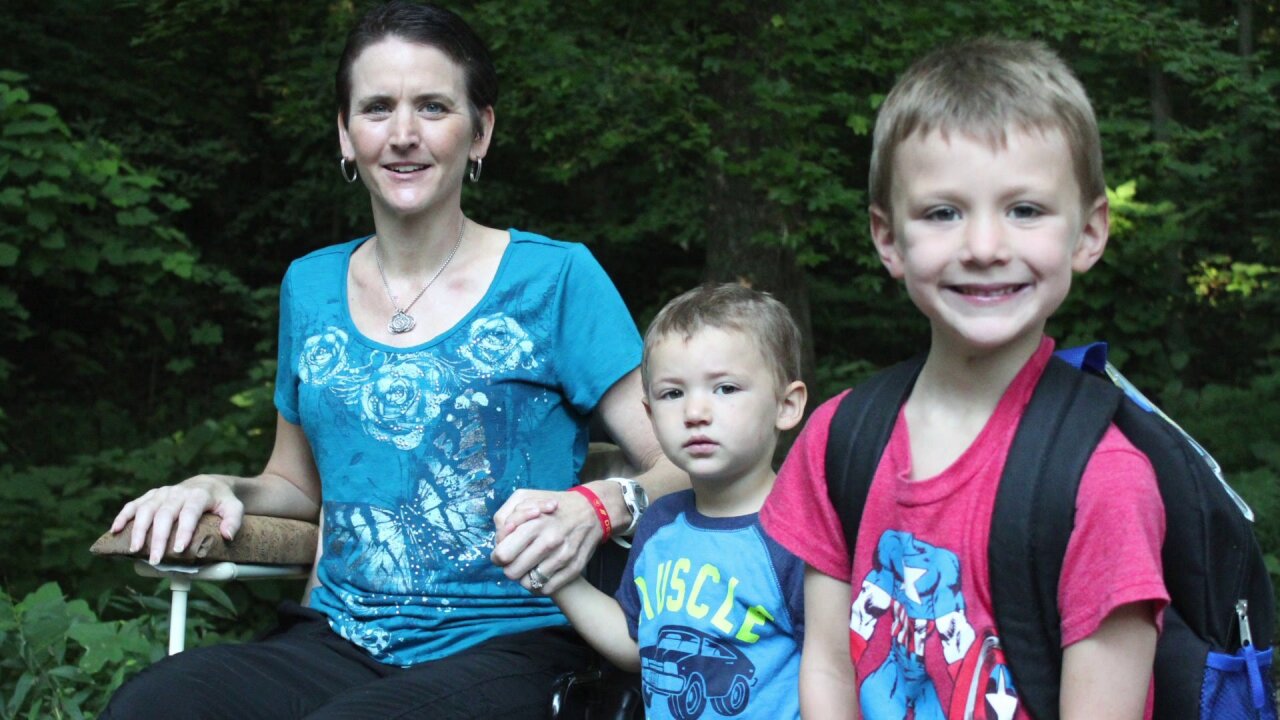 HANOVER COUNTY, Va. -- On a casual spring outing to Short Pump Park, Ben Toderico, his wife Denise Gorondy, and their sons Gavin and Cormac resemble every other happy family at the park.

But the past year has been far from joyful for the family.

"It's a life changing event, everything is different," Toderico said at an interview at the family's Hanover home.

On June 5, 2016, Denise Gorondy, a veterinarian and co-owner of Three Oaks Equine Veterinary Services in Goochland, left the couple's home for a run.

"I've been running that route three or four times a week for 13 years," Gorondy said.

She had only gone about a mile, when an SUV crossed a double yellow line and hit her from behind.

The impact threw her 50 yards into a grassy field.

The driver, Tsz Kit Zane Theodore Yung, drove off and later told investigators he though he hit a deer.

"She was in the field for over an hour," Toderico said.

Finally, a man riding by on a bike noticed debris in the road and saw Gorondy. He raced to a nearby house and the homeowner called 911.

Toderico did not find out what happened to his wife until a deputy pulled into his driveway.

"At that point I knew something had happened to her, and I just asked where she was going," Toderico said.

In the trauma unit at the VCU Medical Center, Doctor James Whelan, the Trauma Attending in the Division of Trauma and Operations Director, assessed Gorondy's condition.

"What she did end up having was a pretty bad brain injury," Whelan said.

For roughly two weeks, Gorondy was in a coma.

"People who come into the trauma bay who aren't doing anything... 90 percent of those people won't leave the hospital," Whelan said.

But, Toderico did not give up hope.

"I was there every day, talking to her every day," Toderico said.

A group of Toderico's co-workers from the Richmond Police Department stayed with him at the hospital 24/7 during those first two weeks.

Finally, during one of Gorondy's hourly brain exams, she responded to a command from her primary care nurse, Jenny Magruder, to open her eyes.

Magruder, a nurse in the Neuroscience ICU, cared for Gorondy during her entire stay at the hospital

"It's very emotional. You get very attached, not only the patients but the families," Magruder said.

That would be just the beginning.

Gorondy was eventually released, and since that time, she and Toderico have been working tirelessly on her physical therapy.

"He is my trainer, my therapist so to say," Gorondy said.

Toderico's coworkers even donated their vacation time so that he can continue to stay at home and help his wife.

One of the most difficult parts of Gorondy's journey so far was not being able to hold her sons for months.

"Oh, it was devastating, every mother would love to scoop up her boys and hug them," Gorondy said.

Toderico made Gorondy practice carrying dumbbells at the gym until she could carry one that weighed as much as her oldest son.

"When she put the dumbbell down, I told her she just carried Gavin across the gym. That was a big day, that was one of the proud moments for her," Toderico said.

"I have an incredible husband. I knew when I met him and married him he was an incredible man, but I wouldn't be where I am today, literally, without him," Gorondy said.

While Gorondy and Toderico do not know what lies ahead because traumatic brain injuries can cause lifelong problems, Gorondy said she refuses to live in fear.

"You can't live your life in fear," Gorondy said.

Gorondy, Toderico and all of the people involved in her care, from the cyclist who found her, to the first responders who picked her up at the scene and flew her to the VCU Medical Center, to Dr. Whelan, and her nurses, including Magruder, will all be honored at VCU Health's Shining Knight Gala Saturday, May 6th.

The Shining Knight Gala celebrates a life saved, and all of the men and women who made it possible.