HANOVER COUNTY, Va. – Deputies are asking for the public’s help to identify the man who robbed a Hanover County bank at gunpoint Thursday afternoon.

At approximately 12:19 p.m., Hanover Sheriff Deputies responded to the EVB Bank located in the 8100 block of Mechanicsville Turnpike.

Investigators said a white male suspect entered the bank, approached a teller, displayed a handgun, and asked for money. 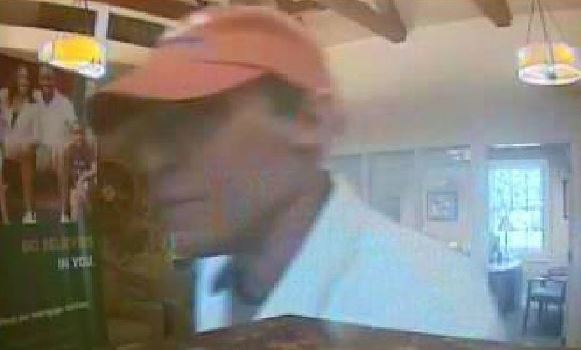 Once receiving an undisclosed amount of cash, the suspect fled the bank in a 90s model BMW, silver in color. The vehicle also had stickers down the right side of the rear windshield.

Deputies said the tag on the vehicle “is possibly a Virginia license plate containing the letters ‘KD’.”

The suspect is described as a white male approximately 50 years old, 5’ 8” to 5’ 10” tall, thin build, wearing an orange baseball cap and a white, long-sleeve, button down shirt. The suspect also had pantyhose over his face.

Anyone with information about this incident is asked to contact the Hanover County Sheriff’s Office at (804) 365-6140 or the Metro Richmond Crime Stoppers at (804) 780-1000. Citizens can also text Crime Stoppers at 274637 (CRIMES), using the keyword “iTip” followed by their tip. Both methods are anonymous.