Masters 2017: Garcia holds off Rose to win at Augusta

Sergio Garcia wins his first Masters and his first major championship after 19 years on the PGA tour.

It was effectively a two-man race for most of the day with Justin Rose and Sergio Garcia in the final pairing pulling away from the field early.

Garcia sunk one playoff hole to get the better of Rose and earn the Green Jacket as the winner of the 2017 Masters Championship.

England’s Rose shot 67 and Garcia hit 70 to reach six under and overhaul long-time breakaway Charley Hoffman, who fell out of the lead for the first time since Thursday with a double bogey via the water at the 16th.

Another stroke adrift is the trio of 2015 champion Jordan Spieth — proving the demons of last year, even Thursday’s quadruple bogey, are long gone — and fellow Americans Hoffman and Ryan Moore.

Australian Adam Scott, the 2013 champion, is poised at three under with 2011 winner Charl Schwartzel of South Africa one further back and England’s Lee Westwood and debutant Thomas Pieters of Belgium the only other players under par at one under.

Behind Hoffman, the leaderboard shuffled with the frequency of the wheels on a Vegas slot machine Saturday, throwing up an intriguing prospect for the final round.

Rose has the benefit of a major title — the 2013 US Open — and Olympic gold under his belt. The 36-year-old played in the final group with Spieth in 2015, finishing second to the young American, and was tied 10th last year.

“You’ve got to be aggressive at times, there’s certain pins you’ve got to take advantage of but this is a golf course you’ve got to pick your moments,” Rose told Sky Sports. “That will be the gameplan.”

Garcia, 37, part of a four-way share of the lead at halfway with Hoffman, Fowler and Pieters, is still chasing a first major title in his 74th attempt, a run which has included 22 top 10s.

Victory on Sunday would coincide with what would have been countryman Seve Ballesteros’ 60th birthday. Ballesteros, who died in 2011, was the first European to win the Masters in 1980 and backed it up in 1983.

“It would be amazing, something difficult to describe but we still have one day to go. It’s not going to be easy,” Garcia told Sky Sports.

The Spaniard is engaged to be married later this year, and seems rejuvenated with a more positive mental attitude than perhaps at times in his career.

“I need to be extra patient, I need to not lose my head, stay calm no matter what happens and keep going in the same direction because it feels good,” Garcia added. 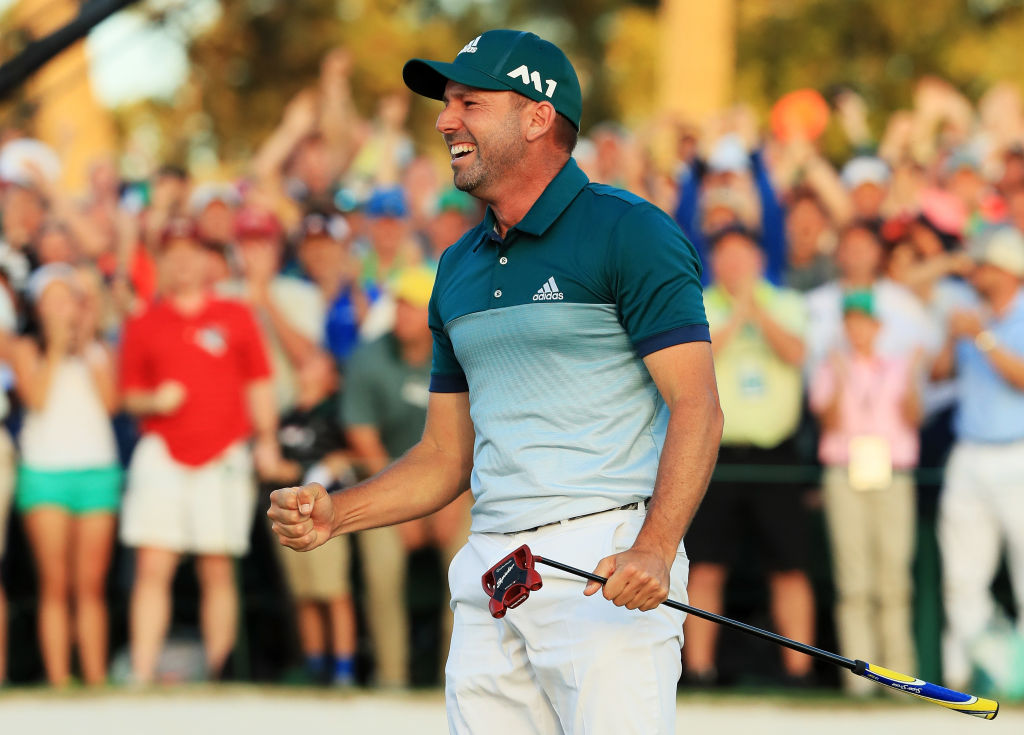 Fowler is also seeking his breakthrough major after four PGA Tour wins including this year’s Honda Classic. The Californian, who finished top five in all four majors in 2014, has long since shed a reputation as just a clothes horse and will be a serious threat.

“It’s probably the best I’ve ever felt in a major, no question about it,” Fowler, 28, told Sky Sports.

He’ll play alongside great friend Spieth, who has finished no worse than second on his three visits to Augusta.

The Texan was 10 shots adrift of Hoffman’s lead after round one, largely courtesy of that nine on 15, but he has made steady progress through the field. His only blemish Saturday came with a three-putt bogey on the short 16th, his first bogey in 30 holes, to slip back to four under.

“We’ve really grinded it out to have a chance to win this tournament. It’ll be fun having a new experience coming from behind,” said Spieth, who squandered a five-shot lead on the 10th tee while bidding for back-to-back wire-to-wire titles last year.

“In order to win this golf tournament you have to play to win.”

‘Round of my life’

Barring one bad swing on the 16th — perhaps his Jordan Spieth moment — the 40-year-old Hoffman showed he has the mettle to contend, and has the experience of playing in the penultimate group in 2015 before finishing ninth.

The 25-year-old Pieters, who played a starring role for Europe in the 2016 Ryder Cup with four wins out of five matches, is bidding to become the first debutant since Fuzzy Zoeller in 1979 to win the Masters.

In all, 14 players will go into Sunday within six shots of the lead, including grand slam-chasing Rory McIlroy.

The Northern Irishman, who needs the Masters to become only the sixth player to complete the set of all four of golf’s major titles, was unable to make any real inroads in a round of 71 Saturday for level par overall.

“I need to play probably the round of my life tomorrow to have a chance,” McIlroy told BBC Sport.

The biggest comeback after 54 holes is the eight shots retrieved by Jack Burke against the amateur Ken Venturi in 1956.

That should give some hope to the likes of 1992 champion Fred Couples, 57, who faded to one over, and three-time champion Phil Mickelson, who struggled to a two-over 74 Saturday and lies in a group eight back.

Mickelson, who will be 47 in June, is bidding to eclipse Jack Nicklaus as the oldest winner after his 1986 triumph at 46 and two months.

That number this year? Garcia’s man.