The 25-year-old green sea turtle was treated by vets at the Chulalongkorn University in Bangkok.

The green sea turtle nicknamed “Piggy Bank” has died after vets in Thailand removed 915 coins from her stomach earlier this month.

The coins were good luck pennies thrown into the pond where the 25-year-old animal lived. Locals gave her the name “Om Sin,” which translates to “Piggy Bank.”

She was thought to be recovering well after the seven-hour surgery when 11 pounds of coins were recovered by vets at Chulalongkorn University in Bangkok. 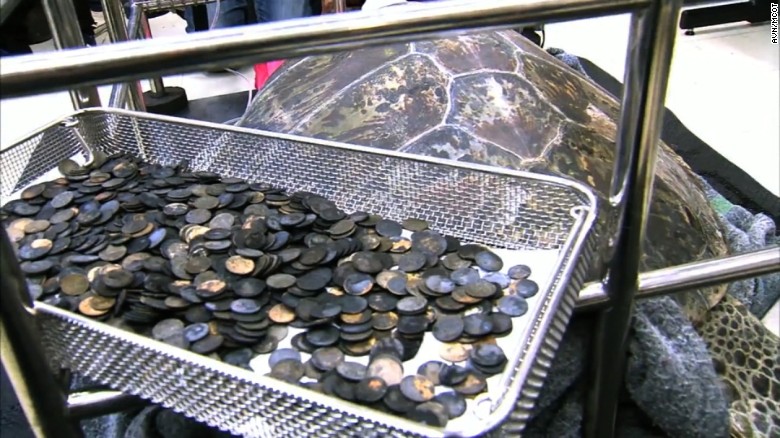 The turtle “fully recovered from the surgery on March 6,” wrote Nantarika Chansue, who led the veterinary team, on her Facebook page. “She was swimming and eating normally for a week … We planned to return her to the Royal Thai Navy Turtle pond on Thursday.”

But on Sunday night she was found to be breathing too slowly and was taken to intensive care with a serious intestinal infection. She underwent emergency surgery Monday but slipped into a coma and died Tuesday morning.

“We are all very sad,” Chansue told CNN. “We tried our best but due to her physical weakness and multiple complications including toxicity in her blood system, she couldn’t make it.”

“Thank you for being my friend… Bank!” she wrote on her Facebook page, where she also posted photos and videos of the turtle’s last days and hours. “RIP,” she added.

Her Facebook updates have received thousands of shares, an indication of how this story has captured the imagination and the hearts of many in Thailand, who see turtles as symbols of longevity.

According to Reuters, the vets will perform an autopsy on Piggy Bank which they hope will help them to better understand these animals and how to treat them in the future.