Calling him racist and unfit, the protesters gathered outside the SunTrust building on Main Street, where Sessions addressed law enforcement officers on combating violent crime and restoring public safety. “President Trump gave us a clear directive. It’s the policy of this administration to reduce crime in America,” he said.

Sessions was confirmed by the U.S. Senate last month despite previously being denied a federal judgeship because of accusations that he had made racist remarks. He has also been in hot water regarding allegations that the Russian government interfered in the 2016 presidential race.

During his confirmation hearing, Sessions denied having communications with the Russian government, but The Washington Post recently revealed that he had met twice last year with the Russia’s ambassador to the U.S. As a result, Sessions has had to recuse himself from the Justice Department’s investigation into whether Russia tried to influence the election.

The protesters marched around the perimeter of the SunTrust building, led by an enthusiastic woman rhythmically banging a pan with a wooden spoon and chanting, “No bans, no walls, sanctuary for all” and “Hey hey, ho ho, Jeff Sessions has got to go.” Many of the demonstrators objected to Session’s alleged involvement with Russia, his record on civil rights and his stance on immigration.

“He’s the person who’s supposed to hold other people accountable for their incongruities and their unlawfulness, and I’m very concerned about those characteristics and those qualities in our attorney general,” said Rev. Jay McNeal, executive director of United Faith Leaders, an interfaith interdenominational group that helped organize the protest.

A number of progressive organizations including the Sierra Club, Indivisible Richmond, Equality Virginia, and ICA Out of RVA collaborated to organize Wednesday’s rally. The American Civil Liberties Union was not involved in organizing the protest, but legal observers from the group were there to ensure that no one’s First Amendment rights to free speech and to organize were violated. 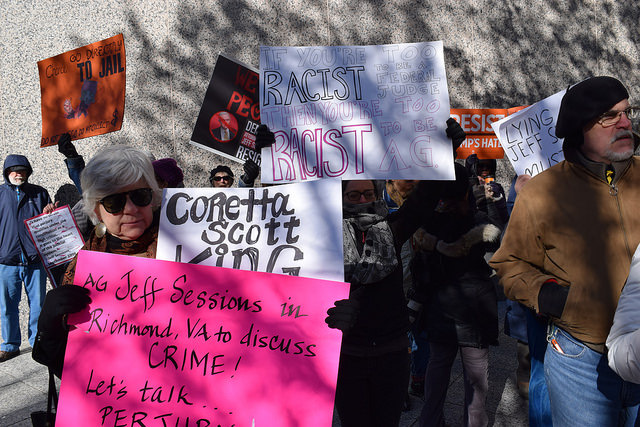 Charlie Schmidt, public policy associate for the ACLU of Virginia, said he is concerned that the top prosecutor for the country will negatively impact civil rights in the U.S.

“The administration has a lot of leeway to say, ‘Well, we’re not going to hire any more staff attorneys for the Office of Civil Rights; we’re not going to investigate police when there’s misconduct.’ They have a lot of discretion and a lot of power,” Schmidt said.

Last month, in his first speech as attorney general, Sessions said the Justice Department will pull back its monitoring of police departments with civil rights abuses. He said that the authority of police departments had been undermined by scrutiny from the Justice Department, and scaling back on federal oversight would improve their effectiveness.

“We want the Justice Department to continue to root out corruption and racism in our police department, instead of falling into the false narrative that police are the victims,” said Susan Swecker, chairwoman of the Democratic Party of Virginia.

A few minutes before the protest, Swecker and several members of the General Assembly held a press conference and called on Sessions to resign for misleading the Senate. The legislators, all of them Democrats, included Dels. Delores McQuinn, Jeff Bourne and Betsy Carr of Richmond and Sen. Rosalyn Dance of Petersburg.

While in Richmond, Sessions praised Project Exile, which imposes a mandatory five-year prison sentence on felons convicted of possessing firearms.

While crime rates have been at historic lows nationwide, Sessions said violent crime has been increasing in some cities, including Richmond. He blamed the increase in part on the growing opioid epidemic, saying, “We have too much of a tolerance for drug use.”