CHESTERFIELD, Va. – Midlothian father Stephen Jennings worked on his laptop Friday, from the airport gate, as he waited for the JetBlue flight that would carry him home from the 70-degree temperatures of a business trip in Miami Beach. That was January 6; the day Esteban Santiago traveled from Alaska to the same airport and then, police said, collected his checked bag and went into a bathroom stall, loaded his Walther 9-millimeter pistol and shot the first people he saw.

Santiago shot all the rounds in one magazine and then used the other, according to the criminal compliant document. That same document says Santiago thinks he fired 15 bullets, and he aimed at his victims' heads.

Five people died and eight were injured in the mass shooting at Terminal 2 of the Fort Lauderdale-Hollywood International Airport.

Meanwhile, Mr. Jennings waited at his gate in Terminal 3, oblivious, he said, to the violent mayhem which had erupted a terminal away.

Another passenger listening to CNN let him know about the mass shooting. Jennings knew of the shootings around 1:20 p.m., about 20 minutes after the accused gunman first opened fire.

“I was shocked but because he was caught, I wasn’t too worried,” Jennings said.

He called his wife and parents to let them know he was okay, and then he finished his work and decided to pick up some lunch, which he finished eating around 2 p.m. – an hour after the event first began.

It was the calm before the next storm. 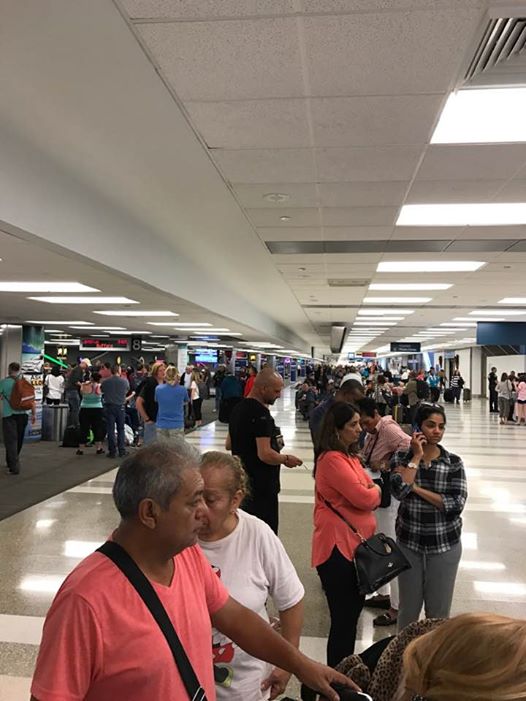 “Chaos and bedlam ensued,” he continued. “Everyone scattered, dropped what they were holding. Food and luggage was sprayed all over the terminal hall and the people in my gate crouched under the seats or got behind poles.”

Jennings lay underneath a seat next to a woman who he said cried “uncontrollably.”

“It actually crossed my mind that if I only get shot in the leg or back, I can survive that, but not a shot to the head,” he said.

He was there long enough to call his wife, who, along with her work colleagues, prayed for his safety.

All around Jennings, people sobbed, prayed and pleaded – even the gate agent, he said.

Then people began running toward the jet bridge door to get out, but it was locked. The door finally opened and they were led to the tarmac.

Helicopter cameras captured law enforcement and civilians crouched down again – almost an hour after it had been reported the shooter was in custody --and multiple news agencies reported either a second shooter or that something in the parking garage set off concern.

Reports of the second shooter had spread through the airport and social media and led police to react as a safety precaution.

Sheriff Scott Israel of Broward County, Fla., told the New York Times he issued the order to shut the entire airport as a safety precaution after he received information that “perhaps gunfire had happened and an active shooter was in another terminal.”

He told the NY Times that it took about 30 to 45 minutes to debunk the rumor, which he thinks began in Terminal 3 when someone said they heard what they thought was gunfire.

Meanwhile, the misinformation took Jennings on a very different trajectory, one that he said involved four hours on the tarmac and “madness, fatigue, and uncertainty” over the following 10 hours.

“We were led to the tarmac where the atmosphere was apocalyptic.  Heavily armed law enforcement surrounded us, helicopters flying above circling the airport, and people dazed and bewildered and unsure what to do, just stumbling around like zombies,” Jennings said.

A rumor of a second shooter caused a complete shut down of the airport, and more chaos ensued. PHOTO: Stephen Jennings

“People were crying and filled with fear. Because there was no bathroom to get to, some people even relieved themselves in cups,” he continued.

He paired up with a “crisis buddy" named Alicia, who told him she didn’t want to be alone. They eventually walked out of the airport, crossed a highway and were picked up by her aunt, who later dropped him off at a hotel.

The next day, the airport remained locked down and passenger luggage was shipped out of the airport. Jennings picked his up, rented a car, and drove to Orlando for a Sunday flight home.

He arrived home to frozen conditions, almost 48 hours after the terrifying chaos began.

“As terrifying as the evil was on Friday in Ft. Lauderdale and it certainly shook me, the lasting impact that this experience will have on me is how wonderful people can be in times of catastrophe,” he said. “We do live in a world filled with good people. That truth gives me hope that this world will get better.”