RICHMOND, Va. — A winter storm warning is in effect through Saturday evening for the Richmond metro area, and includes all areas from the Northern Neck back to Farmville and points south.

A winter weather advisory is in effect for areas well north and northwest of Richmond. Governor Terry McAuliffe declared a state of emergency ahead of the storm, in anticipation for its impact in the southeast and other regions.

A blizzard warning is in effect for Hampton Roads due to higher winds speeds and lower visibility issues on Saturday.

Steady snow will continue much of the morning, heavy at times, especially southeast of Richmond.

The snow will taper off from west to east, ending in the metro around noon to 1 p.m., and by late afternoon in eastern Virginia. 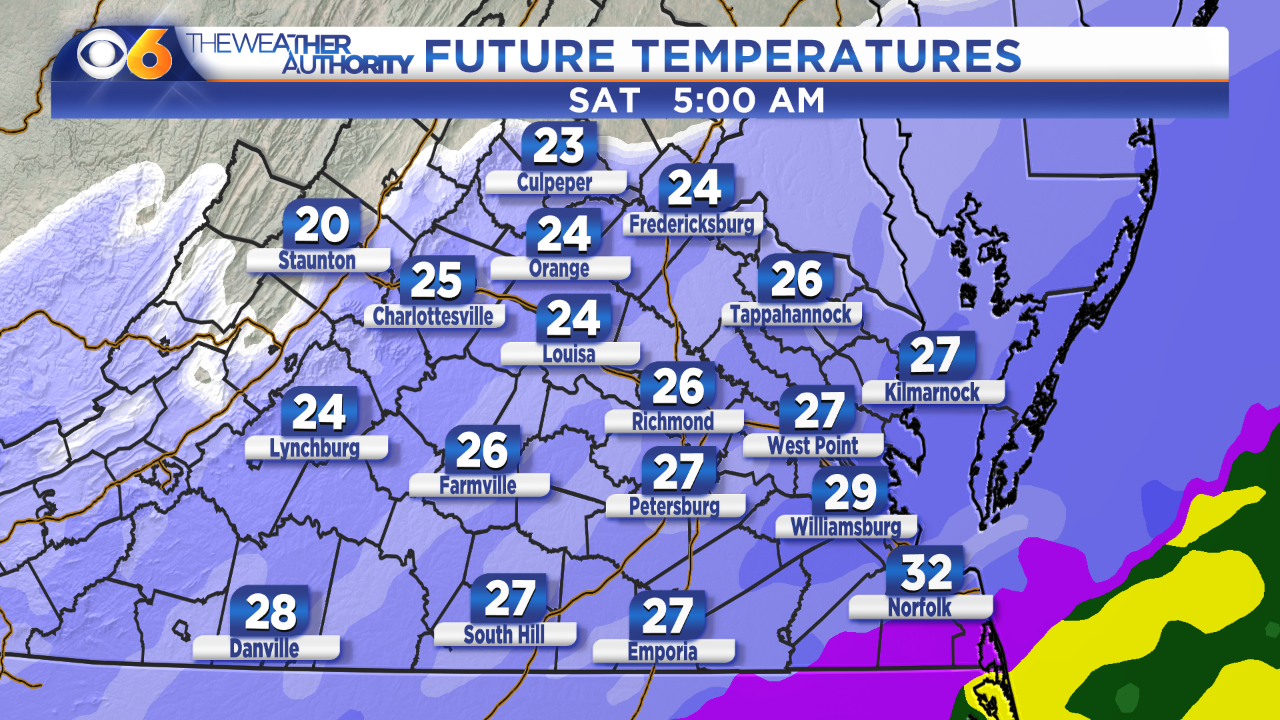 Snowfall accumulations will be lowest far northwest where one to three inches will accumulate.

There will be a sharp cutoff of the snow, so little to no snow will occur across far northwestern Virginia.

Accumulations of six to nine inches will stretch from parts of the Northern Neck back through Richmond and over towards Farmville and Danville.

Snowfall amounts should exceed nine inches across far southern and southeastern Virginia, including parts of the Middle Peninsula, Williamsburg, the Tri-Cities and over towards South Hill.

Amounts exceeding 12 inches are possible near and east of Emporia over to Virginia Beach.  Localized 12-inch totals will also be possible from Hampton Roads down into northeastern North Carolina.

Wind speeds will pick up Saturday with some gusts over 20 to 25 mph, producing some blowing and drifting snow.  Conditions in central Virginia will not reach blizzard-level criteria, but may near Virginia Beach.

Arctic air will punch in behind the storm.  Temperatures on Saturday will hold in the 20s all day with wind chills 10°-18°.  Lows Saturday night will be in the teens.  Highs Sunday will stay below freezing, but some melting will occur in direct sunlight.  Anything that does melt during the day will refreeze  Sunday evening and create icy conditions on untreated surfaces Monday.

Lows Sunday night into Monday morning will be bitterly cold with temperatures in the single digits.  Highs Monday will still remain below freezing.

WHEN WILL IT MELT?

Warmer temperatures will occur mid and late week, which will help the snow melt more quickly.

EXTENT OF THE STORM: