HENRICO COUNTY, Va. – Police have arrested a man who they say damaged and vandalized the Tuckahoe Little League complex with racist messages.

Taylor Allen Ferrell was arrested Friday afternoon and charged with three counts of intentionally damaging a property or monument.

Those sources also say Ferrell was found with spray paint cans in his car and paint residue on his hands.

Offensive messages in black spraypaint covered the outside walls of the building. An officer on scene said because of the nature of the messages, the incident could possibly be reported as a hate crime, although right now the crime is being investigated as vandalism. 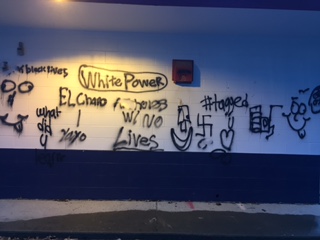 The vandalism included spraypainted words insulting those participating in the Black Lives Matter movement, along with immigrants and a message of “White Power” in black paint at the top of the wall. One message graphically insulted the President elect, Donald Trump.

The park supervisor tells CBS 6 $5500 worth of damage was done to the complex.