What is President Obama doing at Fort Lee?

The "CNN Presidential Town Hall: America's Military and the Commander in Chief" comes as Obama enters the waning days of his administration. He will be looking to frame the national conversation on security and military issues that have shaped his presidency and will, in time, define his foreign policy legacy -- particularly as his would-be successors battle it out ahead of the November 8 vote.

Obama's nearly eight years in the White House have played out against a background of wars. He campaigned on a promise to extract the US from conflicts in Afghanistan and Iraq, and he's been roundly criticized for failing to intervene more actively in Syria's civil war. During his tenure, he's launched a new offensive against ISIS and instituted policies to deal with the growing threat of cyber warfare. 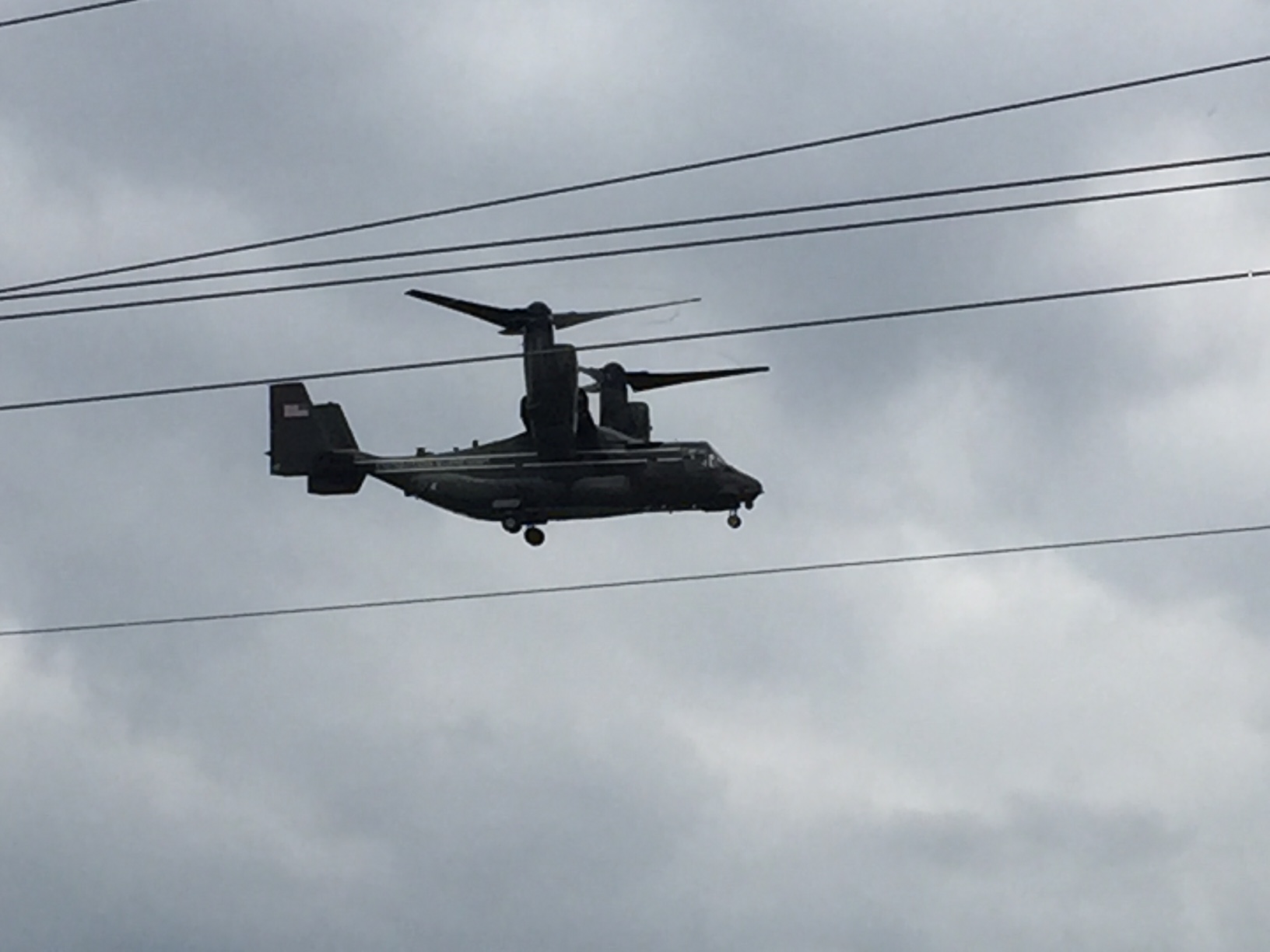 These and other aspects of his service as commander in chief are currently being hashed out on the campaign trail, notably in Monday night's first presidential debate.

At Wednesday's town hall, active duty service members, veterans and the military community in Fort Lee, Virginia, will have the chance to ask their own questions of the President. Here are six things to watch for.

Politics seems nearly unavoidable in this ugly campaign season. The White House said ahead of the town hall that Obama wants to keep the event focus on troops and away from politics. But in previous appearances, the President has welcomed the opportunity to push back against Donald Trump and make the case for Hillary Clinton -- his former secretary of state and the candidate he's betting on to safeguard his legacy.

"The attendees are welcome to ask about any topic or issue they would like, but the President's view is that there is plenty of time for politics this season, including time he will spend on the campaign trail next month," said White House Communications Director Jen Psaki.

"His objective today is to put that aside and instead to focus on thanking the families and active duty military on the base for their sacrifice, and to hear from them on challenges they have faced and anything else they want to talk about during his visit," she added.

The President could also face awkward moments if he's asked to weigh in on policies on which he and Clinton have taken different approaches, such as Syria. Clinton has called for a no-fly zone there despite Obama repeatedly panning the idea.

He's acknowledged their differences of approach in the past, however, particularly over the uses of American power. Clinton has sometimes advocated for a more interventionist approach to global problems in places such as Libya. Even so, Obama said this month in Pennsylvania that "she's got the judgment and the temperament and the experience to meet any threat."

And, he said, "She's prepared to be the next commander in chief."

In stark contrast, the President has flatly called GOP nominee Donald Trump unfit for the job. Obama has questioned the Republican nominee's admiration for repressive autocrats such as Russia's Vladimir Putin and said the real estate mogul isn't "offering any real policies or plans, just offering division and offering fear."

Obama's political foes on and off the campaign trail have charged that military spending under his administration has been inadequate and have put the country at risk.

Sequestration, which took effect in 2013, puts $1.2 trillion in automatic across-the-board cuts in effect over 10 years, with half of them targeting defense. The issue is one that has particular resonance for the military members in the audience concerned about how the defense cuts affect them and their families.

Trump has accused Obama and Clinton of undermining the military with the cuts, saying, "The generals have been reduced to rubble," at an NBC Commander in Chief Town Hall on September 7.

"I'm going to make our military so big, so powerful, so strong, that nobody, absolutely nobody, is going to mess with us," Trump said.

Economics experts have said it's hard to reconcile that goal, however, with Trump's claims that he would "do it for a lot less."

Obama is likely to explain that the process known as sequestration wasn't meant to target the military for cuts, it was supposed to give Congress a strong incentive to find a compromise on deficit reduction measures -- and that Congress failed to do so. Obama is also likely to point out that despite the cuts, the US military is the most powerful and well-funded in the world by far.

Obama recently acknowledged that the five-year-old war in Syria "haunts" him, and there is perhaps no foreign policy challenge that has earned him more criticism. The right has assailed him for not taking a harder line there, allowing the civil war to spiral and create a safe haven for ISIS. The left has taken issue with an epic humanitarian crisis and called on the US to do more. Allies such as Saudi Arabia have argued that the US should have gotten more involved, or at least armed moderate opposition groups, early on.

Wednesday night will be one of Obama's last chances to defend his approach and argue that he has always acted in America's best national security interests in Syria after years of Middle East conflicts that have brought the US grief. And he'll be able to point to recent battlefield successes against ISIS to make the case that his policy toward the extremist group is succeeding, even as its global terror campaign grows.

Obama famously derided 2012 competitor Mitt Romney for naming Russia as America's "number one geopolitical foe," but four years later, some of the President's own Pentagon advisers have started saying the same thing. Not coincidentally, Russian President Vladimir Putin has assumed a starring role in the 2016 campaign.

Moscow has unsettled US allies in Europe with its annexation of Crimea. It's violated arms control treaties with the US. It's providing military support for the Syrian regime, which targets its own people with barrel bombs. And Russia didn't enforce a Syrian ceasefire that would have allowed for close US-Russian military cooperation if it had succeeded. US officials and lawmakers also say Russia is the chief suspect behind cyberattacks on US election systems and the Democratic National Committee.

Though Obama might have some vulnerabilities of his own on Russia, any mention of Putin will provide him a political opening to criticize Trump for saying positive things about the increasingly autocratic ruler and suggesting that he could have a more productive relationship with him. At the same time, Obama will also likely concede that, on certain issues, Washington has to work with Moscow.

A cornerstone of Obama's foreign policy has been his pivot to Asia, where he's tried to reassure allies concerned about a rising China by demonstrating American commitment and strength in the region. But even as he is likely to tout the successes of this policy, he faces a harsh regional reality in the form of a nuclear North Korea that has only become more aggressive.

The isolated rogue regime has escalated its tests of nuclear weapons and missiles in the last 18 months, leading most experts to conclude that it is intent on building the capability to deliver a weapon to US allies in the region, including South Korea and Japan, if not to the US itself.

When asked about Pyongyang after its most recent nuclear test on September 9, Obama said that he'll be deploying missile defense systems to protect South Korea and rallying the international community to apply existing sanctions and craft new ones. And he has also called on China to do more to rein its ally in, even though Beijing is perturbed by the pledged missile defenses so close to its shores.

The many veterans and their family members in the audience on Wednesday night will have the opportunity to ask Obama about efforts to reform the dysfunctional veterans' health system and provide more support for wounded warriors or others returning from active duty overseas.

The Veterans Affairs system has been strained badly as older veterans age and face declining health. At the same time, over 2.5 million soldiers have served in Iraq and Afghanistan since 2001 -- and they request help at a greater rate than earlier generations.

Obama's first secretary of Veterans Affairs, retired Gen. Eric Shinseki, resigned in 2014 after it was discovered that employees throughout the VA hospital system were lying about months-long waits for veterans seeking care.

"The misconduct has not been limited to a few VA facilities, but many across the country," Obama said at a May 2014 press conference. "It's totally unacceptable."

Obama, who quietly pays regular visits to Walter Reed Medical Hospital just outside DC to visit wounded servicemen, will likely point to increased access to care for veterans, success at reducing the backlog of veterans' disability compensation claims and efforts to reduce veterans' homelessness while improving their access to jobs and education.