CHESTERFIELD COUNTY, Va. — Authorities are asking for the public’s help to identify a man who robbed the Dollar General on a Jefferson Davis Highway Monday night in Chesterfield County.

It happened at the Dollar General in the 6700 block of Jefferson Davis Highway just after 10:05 p.m.

Police said the suspect walked up to an employee and then passed a note implying he had a gun. He then demanded money.

The suspect took off with an undisclosed amount of cash and ran off on foot.

Police described the suspect as a black male about 5 feet 5 inches tall. He had short black hair and a mustache. He was last seen wearing a blue shirt and black jeans. 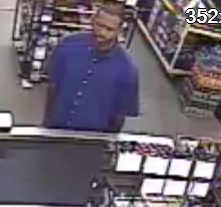