Officials said the 1969 Beech 95-B55 twin-engine, fixed-wing aircraft was attempting to land at the airport at 12:24 p.m. when it came to the end of the runway and pulled back up.

"Further investigation by the state police, NTSB and FAA have determined that the aircraft touched down midway down the runway and then executed a 'go-around,'"Virginia State Police Public Relations Director Corinne N. Geller said. "As it attempted to turn and climb, it appeared to have stalled as it made it beyond the railroad tracks at the end of the airport property."

Geller said the plane banked left before it crashed into the tree line, which was near railroad tracks, before it burst into flames.

Six bodies were recovered from the wreckage and transported to the Office of the Chief Medical Examiner in Richmond for positive identification and autopsy. 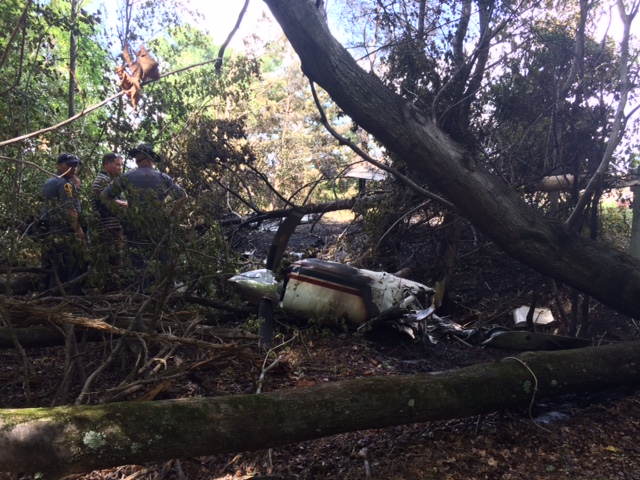 The victims have been identified as 64-year-old William C. Hamerstadt of Carmel, Indiana. Hamerstadt was piloting the plane.

The passengers were the plane's owner, 73-year-old Robert D. Ross from Louisville, Kentucky, as well as 52-year-old Lisa K. Borinstein, 19-year-old Luke J. Borinstein and 15-year-old Emma R. Borinstein. The Borinsteins were from of Shelbyville, Indiana.

Additionally, 15-year-old Maren Timmermann, who was from Berlin, Germany, died in the crash.

Geller said the plane left Louisville, Ky., Friday morning before stopping in Shelbyville, Ind., and continuing to Shannon Airport, which was the plane's final destination.

The cause of the crash remains under investigation by VSP and the NTSB and FAA.

Troopers and the NTSB remained at the crash scene Saturday.