RICHMOND,Va. — Authorities are asking for the public’s help to identify a man who robbed two businesses in Richmond Monday and Tuesday.

Police believe the man is also responsible for robbing the Boost Mobile store at 6333 Jahnke Road on Monday just before 11:50 a.m.

“The suspect briefly spoke to the clerk about phones when he initially entered the store around 11:06 a.m.,” Richmond police said in a news release. ” He returned around 11:44 a.m., walking behind the counter and demanded money from the clerk. He fled southbound on ahnke Road toward Food Lion.”

The suspect was spotted on surveillance video arriving at the store in a dark-colored, four-door sedan before the crime. He was also caught on surveillance cameras at a nearby store.

The suspect is described as a black male with a dark complexion, between 24-28 years old. He is about 5 feet 7 inches tall and weighs 140-160 pounds. Officials said he is  bald and had metallic fillings on his front teeth. 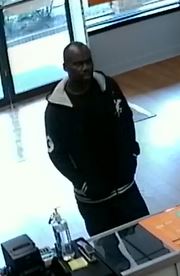