Hillary Clinton: ‘I accept your nomination’

PHILADELPHIA — Hillary Clinton beamed with emotion as she took the convention stage to become the first woman ever to accept a major U.S. party’s presidential nomination.

“It is with humility, determination and boundless confidence in America’s promise that I accept your nomination for President of the United States,” Clinton said to thunderous applause at the Wells Fargo Center in Philadelphia.

Clinton appeared almost overcome with emotion as she entered the arena to loud cheers and embraced her daughter, Chelsea, who introduced her as the next President of the United States. She took a deep breath to collect herself as delegates in the crowd were in tears.

“When there are no ceilings, the sky’s the limit,” she said.

Clinton quickly reached out to disappointed Bernie Sanders voters. With the Vermont senator watching from the arena, Clinton told his supporters “I’ve heard you. Your cause is our cause.”

And she took an early swipe at Republican nominee Donald Trump.

“Don’t let anyone tell you we don’t have what it takes,” Clinton said. “Most of all, don’t believe anyone who says: ‘I alone can fix it,'” a reference to Trump’s acceptance speech last week.

She told Americans the nation is facing a “moment of reckoning” as powerful forces try to tear it apart.

“Powerful forces are threatening to pull us apart,” she said. “Bonds of trust and respect are fraying. It truly is up to us. We have to decide whether we all will work together so we all can rise together.”

President Barack Obama congratulated Clinton at the conclusion of her speech.

“Great speech,” he tweeted. “She’s tested. She’s ready. She never quits. That’s why Hillary should be our next @POTUS. (She’ll get the Twitter handle, too)”

As she makes history by accepting her role as the first female nominee of a major political party, Clinton is offering herself as the epitome of steady leadership to a nation that is anxious and looking for reassurance.

“When there are no ceilings, the sky’s the limit,” she said.

Clinton is working to persuade Americans that she understands their frustration and economic anxiety at a time when many of them still do not trust her. Her prime-time televised address is especially crucial because she has not so far generated the kind of passion among her supporters that Trump has among his backers by channeling anger about the direction of the country.

Clinton admitted that many people did not know what to make of her and highlighted her struggles to reveal her private, inner self to the public.

“The truth is, through all these years of public service, the ‘service’ part has always come easier to me than the ‘public’ part,” Clinton said.

She wove a parable of her wholesome middle class upbringing and said her family were builders of the American dream and not people “with their name on big buildings” — another dig at Trump. 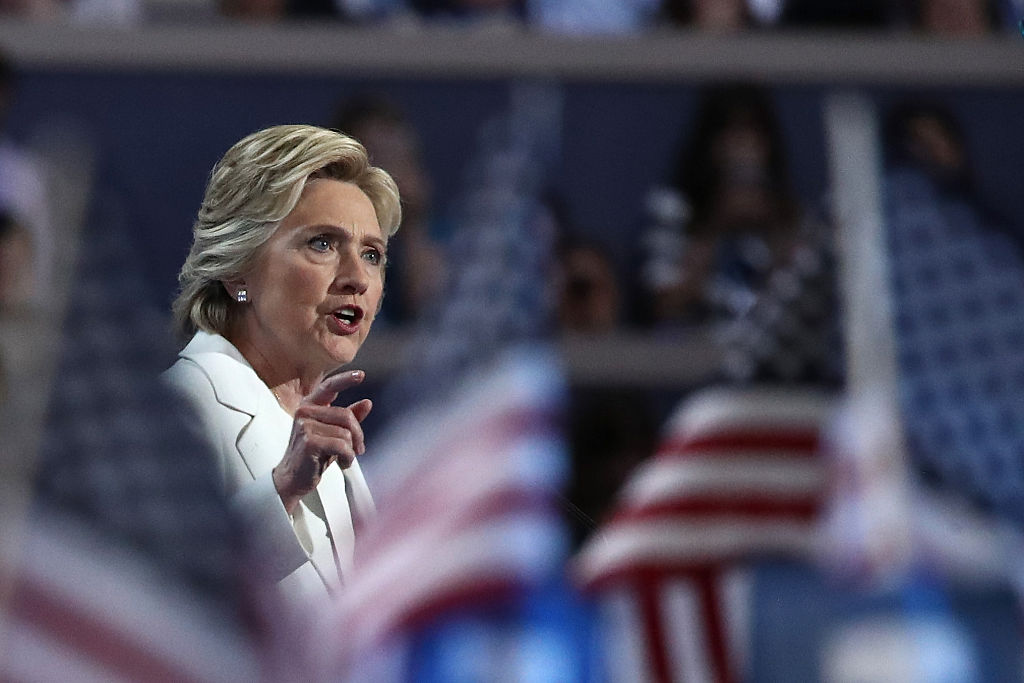 Clinton took pains to reach out to white blue-collar workers, many of whom have been left behind by economic globalization and technological change and have been attracted by Trump’s anti-elite message.

“Right now, an awful lot of people feel there is less and less respect for the work they do,” she said, and admitted that politicians had not done a good enough job of showing they understand.

While Clinton and President Barack Obama have argued that ISIS is on the run, the economy is on the upswing, and Americans are safer than they have been in years, they are struggling to counter the dark image that Trump has painted of a nation in decline, chaos and disorder.

Amid charges by Republicans that the optimistic mood of the Democratic convention has ignored the threat from ISIS and Islamic terrorism, Clinton will be specific about the global national security threats that loom.

“Anyone reading the news can see the threats and turbulence we face,” Clinton said. “From Baghdad to Kabul, to Nice to Paris and Brussels. From San Bernardino to Orlando, we’re dealing with determined enemies who must be defeated. No wonder people are anxious and looking for reassurance — looking for steady leadership.”

Ahead of her speech, retired four star General John Allen, the former head of US and international forces in Afghanistan, delivered a powerful speech in which he told delegates that Clinton would be “exactly the Commander-in-Chief America needs.”

‘America will continue to lead’

“With her as our Commander-in-Chief, America will continue to lead this volatile world. We will oppose and resist tyranny and we will defeat evil. America will defeat ISIS and protect the homeland,” said Allen, who was surrounded on stage by 37 military veterans.

Without specifically naming Trump, Allen, who at one point interrupted his speech to lead the crowd in a chant of “USA, USA” which overwhelmed sporadic cries of “no more war” from the floor, implied that the billionaire would imperil the safety and reputation of the US military.

Clinton is delivering her speech at the end of a largely successful convention which has begun to mend the split left in the party by her divisive primary against Sanders. The mood on the convention floor Thursday was festive and upbeat — in contrast to the discontent that festered on the opening night on Monday when die-hard Sanders fans loudly make their disappointment known.

Samantha Herring of Walton County, Florida, was a Sanders supporter but has decided this week to work hard to elect Clinton.

“Is it hard? Yes. I loved Bernie, but that’s why I have to vote for Hillary,” said Herring, who made signs reading “He has my heart but she has my vote.”

In a self-deprecating nod to her monkish reputation quipped, “You might have noticed, I love talking about mine.”

Clinton’s speech contrasted with Trump’s acceptance address at the Republican convention last Thursday in Cleveland, in that it was brimming with policy ideas — almost as if it was a State of the Union address.

Clinton accused Trump of building his vast business on the backs of workers he had stiffed and people he had left “holding the bag,” and rebuked him for making ties in China, not Colorado, suits in Mexico, not Michigan and furniture in Turkey, not Ohio. All three American states she mentioned are political battlegrounds.

Turning to national security, Clinton warned that a president has to take decisions about war and peace, life and death.

“Ask yourself: Do you really think Donald Trump has the temperament to be Commander-in-Chief? Donald Trump can’t even handle the rough-and-tumble of a presidential campaign.

“He loses his cool at the slightest provocation. When he’s gotten a tough question from a reporter. When he’s challenged in a debate. When he sees a protestor at a rally.

“A man you can bait with a tweet is not a man we can trust with nuclear weapons.”

Conversely, she said she would be a Commander-in-Chief with smarts, judgement and resolve.

With those challenges in mind, the Democratic convention this week has gone about as smoothly as Clinton could have hoped — bringing a cavalry of the party’s heavy hitters to offer personal testimonials about her strength, her empathy and her work as a tireless public servant advocating for change for the better part of her life.

While the convention opened with the embarrassing ouster of party chairwoman Debbie Wasserman Schultz as a result of the DNC email hacking scandal, the marquee speakers — Elizabeth Warren, Bernie Sanders, Michelle Obama and Bill Clinton — have made an effective case against Trump, while humanizing Clinton and casting her as a far more steady hand as commander-in-chief.

Former New York Mayor Michael Bloomberg offered a blistering takedown of Trump’s business acumen, which has been the real estate magnate’s rationale for his candidacy. “I’m a New Yorker, and New Yorkers know a con when we see one,” Bloomberg said.

But it was President Obama who delivered the most withering case against Trump’s candidacy Wednesday night as he described his former rival as the most qualified person to ever seek the presidency and Trump as a demagogue who traffics in fear.

“I can say with confidence there has never been a man or a woman — not me, not Bill, nobody — more qualified than Hillary Clinton to serve as president of the United States of America,” Obama said.

Trump, the president said, “is betting that if he scares enough people, he might score just enough votes to win this election. That is another bet that Donald Trump will lose. Because he’s selling the American people short. We are not a fragile or frightful people. Our power doesn’t come from some self-declared savior promising that he alone can restore order. We don’t look to be ruled.”