The house, however,  is a total loss.

The fire at the home on West River Road was reported at about 3 a.m. 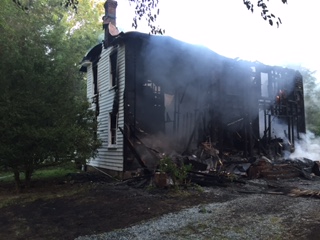 The home, according to King William fire chief of fire Andy Aigner, was built in the 1840s and was one of four in the county that survived the Civil War.

The home did not have working smoke detectors, Aigner said.

One firefighter suffered an ankle injury while battling the fire.