PRINCE GEORGE COUNTY, Va. — Police are asking for the public’s help to identify a suspect that robbed a BB&T Bank in Prince George County Wednesday afternoon.

Police said the robbery happened in the 5100 block of Oaklawn Boulevard around 2 p.m.

Witnesses tell police a white male entered the bank and handed the teller a note demanding money. The teller complied and the suspect fled the area in a truck described as an older model Chevrolet S-10.

The truck is described as dark red or maroon in color, with front quarter panel damage on the driver’s side.

No was injured in the robbery. 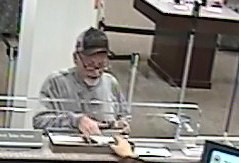 The suspect was wearing a long sleeved gray shirt or jacket with ARMY on the front, black and gray hat, and blue jeans. He was described as approximately 5’5”, with white/gray hair and a goatee.

Anyone with information about this crime or any other crime in Prince George County is encouraged to contact the Prince George County Police Department at (804) 733-2773 or Crime Solvers at (804)-733-2777. You can also text-a-tip anonymously – simply add “274637 (CRIMES)” to your Contacts list on your cellular phone and then text “igotcha” along with your message/tip.