Petersburg goes after paychecks of those who owe back taxes

PETERSBURG, Va. -- City workers in Petersburg are coming to grips with the fact their paychecks will be cut by 10 percent. The city voted to cut wages to most full-time employees, excluding elected officials and appointees, in attempts to close a 17 million dollar budget deficit.

"It's about a week of my son's daycare, so it's just going to make things tight," Sheneese House, a Petersburg city employee, said about the pay cut.

"You're missing $100 out of your pay period, you know that hurts," city employee Wesley Scott added.

Many city workers who spoke with WTVR CBS 6 did not believe the city's promise that the pay cut would last just six months.

Petersburg City Treasurer Kevin Brown will also have his pay cut. Brown is an elected official and not subject to City Council's order.

Still, he said he will give back 10 percent of his pay because it is the right thing to do.

"I make more than them, why should they take 10 percent and i'm not taking anything? That doesn't make sense," he said.

In addition to the pay cuts, Petersburg hopes to recover money by going after the paychecks and bank accounts of citizen who are late paying their taxes.

"They will start working on bank liens and employment liens, so we should see an increase in their collection productivity next week," Brown said.

Previous attempts to collect owed taxes have brought in more than $2 million.

The 10-percent cut will save the city about $1.5 million over the six-month period.

An option to cut 20 percent would have saved the city just over $3 million. 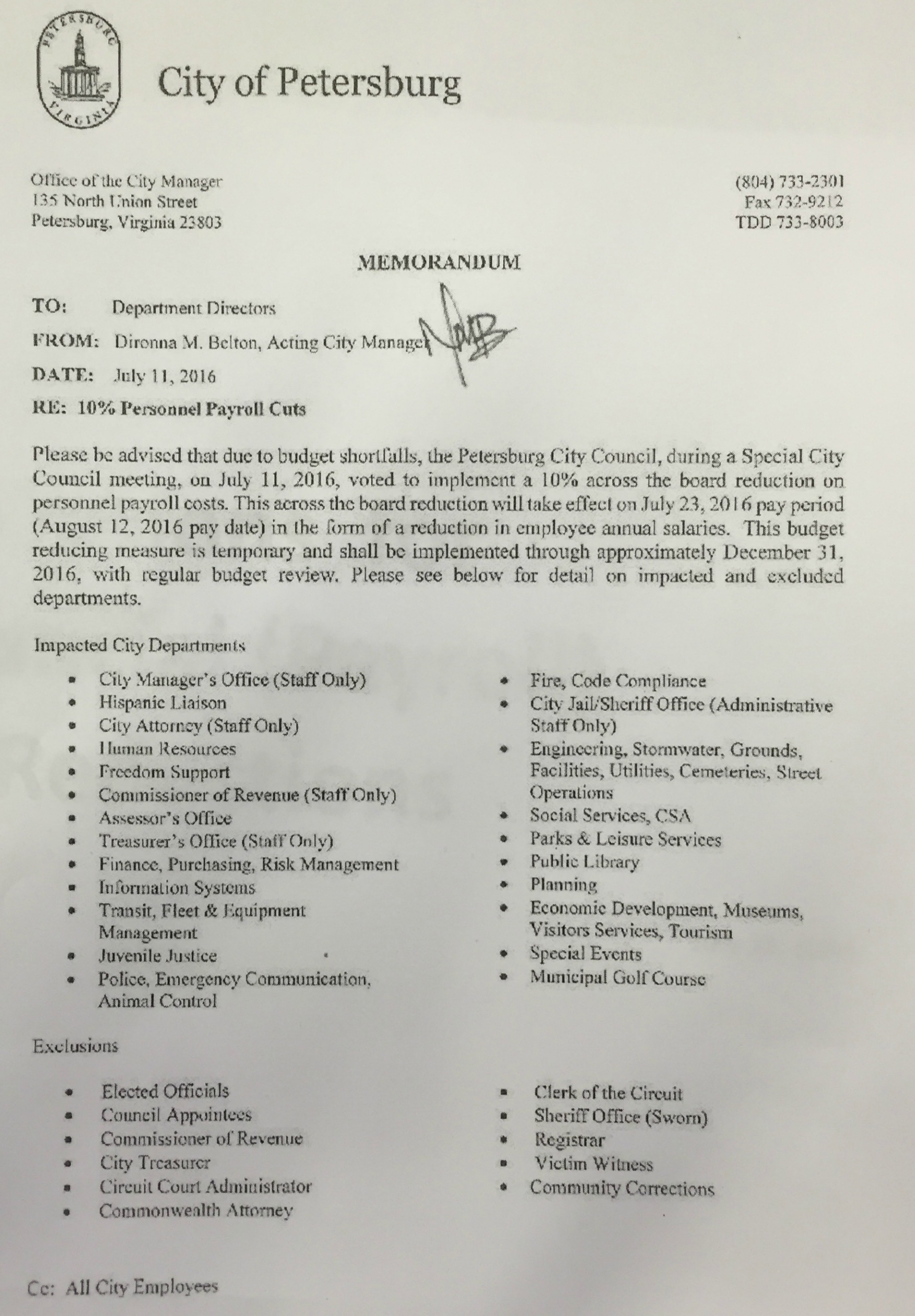 "We have to find a way to make up the funding that's needed for the city to continue to be operational," Petersburg City Council member John Hart said.

Belton said Petersburg will have to make more budget cuts as it works through the financial crisis.

One potential cut would target part-time employees by cutting their hours in half.

The 50-percent reduction could save the city about $309,000 over a six-month period.

On Monday, council learned the city deficit is now at $17 million, about $3 million more than what they previously knew.

"Due to budget shortfalls, the Petersburg City Council, during a Special City Council meeting, on July 11, 2016, voted to implement a 10% across the board reduction on personnel payroll costs, but did not include Council Appointees. “I placed four personnel budget reduction options in front of City Council, all of which impacted myself and Council Appointees. I have no problem with the same 10% reduction nor being treated as every other employee. We are all in this together,” said Ms. Belton."