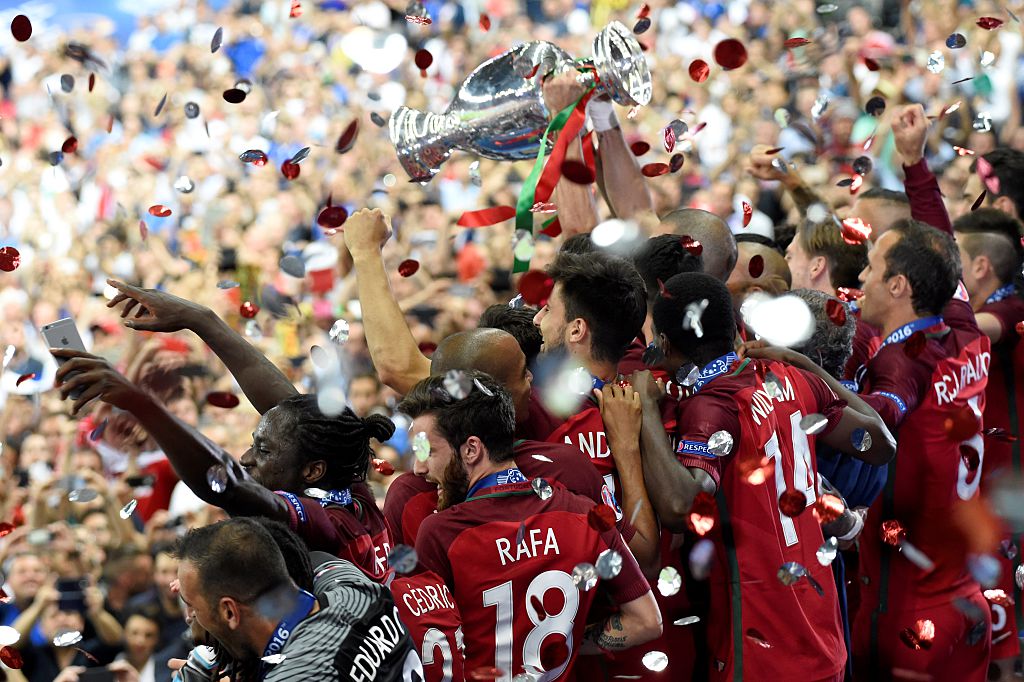 STADE DE FRANCE, Paris — Portugal gatecrashed France’s Euro 2016 party to win the European Championship for the first time in its history — and all this without their leading star Cristiano Ronaldo.

The Real Madrid forward had been forced out of the game with a knee injury in the first half, but Portugal regrouped and thanks to some heroic goalkeeping from Rui Patricio took the game into extra time before Eder struck with 11 minutes to go.

Portugal’s win was all the more remarkable given in its previous 10 meetings, France had won all of them.

France had hit the post late on normal time, but so too did Portugal just before Eder’s goal when Raphael Guerreiro’s exquisite free kick came back off the crossbar and its win was testament to a remarkable group ethic after Ronaldo had gone off.

It had been billed as a contest between the game’s two number sevens, Ronaldo and Antoine Greizmann — except Portugal’s captain lasted only until midway through the first half after he was taken off on a stretcher following a robust tackle by Dimitri Payet on eight minutes.

Twice Ronaldo tried to hobble back on the pitch before he collapsed, distraught and in tears as he conceded his tournament had come to a premature end.

The huge ovation he was given by the Stade de France crowd — French and Portuguese fans alike — must have been scant consolation, given the pivotal role he has played as captain of this side for over a decade since making his international debut as an 18-year-old.

“Terrible to see Cris come off like that,” tweeted Ronaldo’s Real Madrid teammate Gareth Bale and no wonder given many had billed this as the crowning moment of Ronaldo’s career as an international player.

Twelve years ago he was also left in tears after Euro 2004 host Portugal was surprisingly beaten 1-0 by Greece.

True France might have been favorites to win this final given its home advantage, but this was a real opportunity for Ronaldo to showcase his talents in an international final and add to the countless starring roles he has produced for Real Madrid.

In the end given the prodigious efforts of his teammates it didn’t matter and Ronaldo, despite his injury, jumped up off the pitch to join in the celebrations.

He might have departed early, but Portugal’s fans hadn’t forgotten their talisman and as the clock ticked down they chanted his name again and again.

With Ronaldo out of the picture, Portugal needed another hero and that turned out to be their goalkeeper Rui Patricio who throughout the game was consistently on hand to thwart France, notably in saving a couple of fierce shots from Moussa Sissoko, who had an outstanding game.

Since Euro 2016 kicked off on June 10, the French authorities have had plenty on their hands given a state of emergency is still in place after France was targeted during the November terror attacks.

Sunday saw 3,400 police and gendarmes mobilized on the Champs-Elysees, with 1,400 deployed at the Stade de France and a further 1,900 keeping order at the 90,000 capacity Eiffel Tower fan zone.

Ahead of kick off the competition’s organizers had another worry — an invasion of moths, which visibly distracted referee Mark Clattenburg as he went about his final preparations before the start of the game.

Paris had been bathed in blistering sunshine throughout Sunday and on a warm summer’s evening thousands of French supporters — young and old — had made their way to the Stade de France in northern Paris in the hope that host France would deliver the nation’s third European Championship triumph.

Some were daubed with blue, white and red face paint, others donned the French national team’s replica shirts, many wore crazy wigs and hats, while Tricolor flags were waved with gusto.

They belted out the French national anthem — La Marseillaise — singing “To arms, citizens!” and “Form your battalions,” in a bid to rouse their team ahead of the kickoff.

It seemed to work as France came out bristling with intent, notably when Payet clattered into Ronaldo, who was left writhing in agony. In fairness, Payet won the ball with his tackle, but in the follow through collided with the Portugal captain’s left knee.

Amid the intensity there was skill as well from France, notably when Payet delicately chipped the ball to Griezmann, whose header was superbly tipped over the bar by Patricio.

Just past the quarter hour mark, Ronaldo needed more treatment on his left leg with the captain only returning to the action after the Portuguese medical team applied plenty of strapping to his left knee.

But on 23 minutes Ronaldo went down again and this time referee Clattenburg signaled for a stretcher, with the Portuguese captain distraught and in tears as he was ferried away.

Ricardo Quaresma replaced Ronaldo, but Portugal soon had others things to worry about when Sissoko created some space before blasting a shot that Patricio pushed away.

Soon after Cedric Soares was yellow carded for kneeing Payet in the back.

European governing body UEFA had predicted a global audience of 300 million people would be watching this final, but with Ronaldo off and Portugal concentrating on their defensive duties this showpiece was less show and more attrition.

Just before the hour, France coach Didier Deschamps withdrew Payet, who had been so key in the team’s route to the final, replacing him with Kingsley Coman in a bid to break the deadlock.

Midway through the second half it was Coman who teed up another chance for Griezmann, with the Atletico Madrid forward going agonizingly close with a header.

Amid the impasse, Sissoko continued to have a barnstorming game, notably tracking a dangerous run from Renato Sanches.

France was soon back on the attack but Patricio again came to his side’s rescue, conjuring up a brilliant one-handed save to deny Oliver Giroud.

That was Giroud’s final part in the proceedings as Deschamps introduced Gignac.

In contrast to Patricio, French goalkeeper Hugo Lloris had relatively little to do during the game but as the game edged towards extra time he had to tip away a dangerous cross from Nani and then deal with Quaresma’s hooked shot.

Patricio was soon back in action and once more it was Sissoko providing the threat, launching a shot that the Portuguese goalkeeper flung himself to his right before pushing the ball away.

In stoppage time substitute Gignac came desperately close to snatching the win for France when he bedazzled Pepe, leaving the Portuguese defender on the floor, only to then hit his shot against the post.

And then substitute Eder broke free and from just outside the French penalty area he struck a low shot that beat Lloris’ despairing dive.

Portugal had to hold on for another 11 minutes, but it did so to deprive France of a third European Championship triumph.

Cue more tears from Ronaldo — and who can blame him.