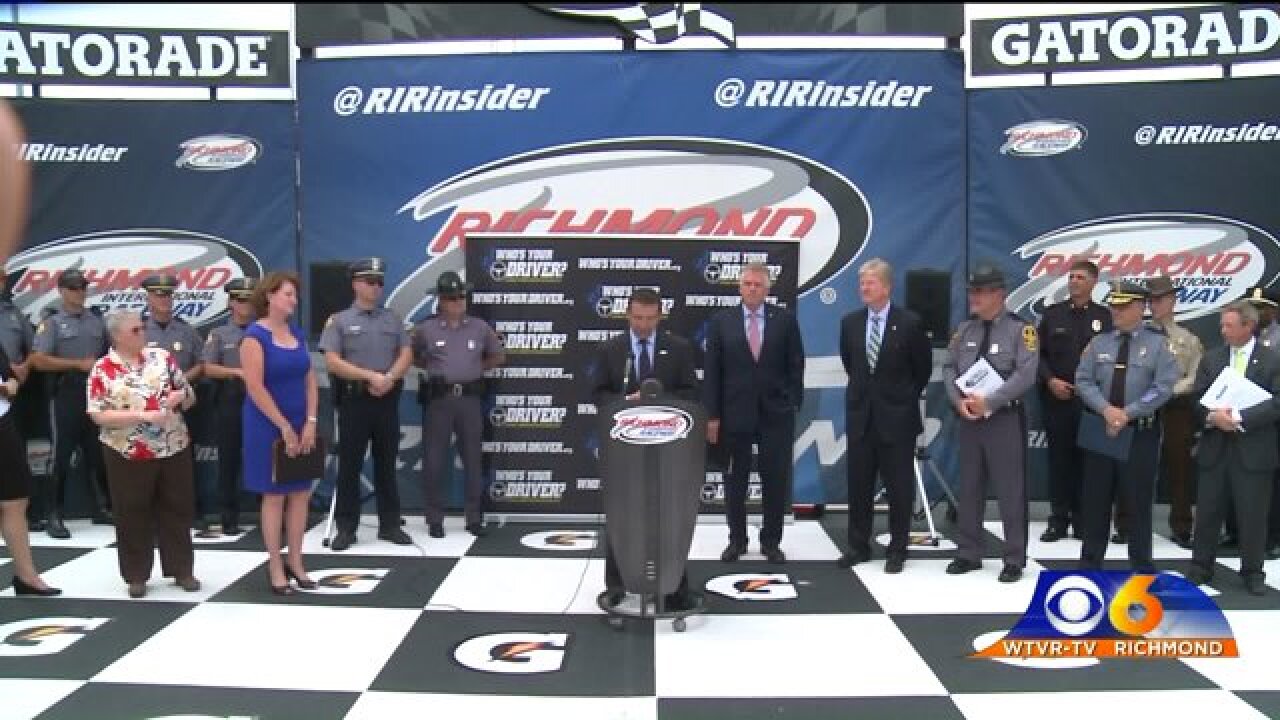 It’s a question all NASCAR fans ask one another: “Who’s Your Driver?” From Denny Hamlin to Dale Earnhardt, Jr., everyone makes a choice. But this September, Richmond International Raceway, DRIVE SMART Virginia and the Virginia Department of Motor Vehicles Highway Safety Office (DMV) will ask fans “Who’s Your Driver” in a different light.

During a press conference today attended by Virginia Governor Terry McAuliffe, RIR, DRIVE SMART Virginia and DMV announced the launch of the “Who’s Your Driver” campaign, which focuses on the importance of selecting a sober driver. Through this new partnership with RIR, “Who’s Your Driver” will be the weekend presenting sponsor for the 2016 Fall NASCAR weekend at RIR.

“When NASCAR fans meet, as you know, for the first time, they always have the same question: ‘Who’s Your Driver,’” said Governor McAuliffe. “It’s also a great question to ask yourself and to ask your friends when you’re going out at night. If you’re going to go out and intend to have a few beers or other alcoholic beverages, you need to be prepared to answer the question: ‘Who’s Your Driver?’”

The campaign was developed out of a need to reach 18 – 35 year old males about the importance of asking “Who’s Your Driver?” and choosing a designated driver. Virginia males account for 72% of DUIs in the state and impaired driving crashes are most prevalent among 18-35 year olds. The NASCAR fans that visit RIR during our race weekend fit into this audience.

“’Who’s Your Driver’ gives us an opportunity to have an important conversation about safe driving and reminds people that sober driving is the only option,” said Janet Brooking, Executive Director of DRIVE SMART Virginia. “We’ve partnered with RIR for a number of years and appreciate their commitment to the local community and to delivering such an important message.”

“Alcohol and driving don’t mix,” said Richard D. Holcomb, DMV Commissioner and the Governor’s Highway Safety Representative. “Impaired driving is no accident, and it’s definitely not a victimless crime. The ‘Who's Your Driver’ initiative, along with this important partnership with DRIVE SMART and RIR, encourages everyone to buckle up and plan for a sober ride home before the party begins.”

“I’m proud to welcome DRIVE SMART Virginia and DMV to the RIR family,” said Dennis Bickmeier, President of Richmond International Raceway. “Working with organizations that have ties to Virginia is always special, and I’m excited about the launch of the ‘Who’s Your Driver’ campaign. We want people to respect the power of the automobile, and part of that respect is following the rules of the road. So, I want people to follow our lead and take the pledge and ask 'Who's Your Driver?'”

For more information regarding the campaign and to take the pledge, please visit whosyourdriver.org.