Riders stranded at Kings Dominion: ‘We are stuck on the Anaconda’

According to Rappahannock Electric Cooperative, nine customers were without power in Doswell as of 7:42 p.m. The outage status reads “crew is on site at event.”

According to park-goer Noah Spangler, power came back on around 8:30 p.m.

"There was a partial power outage in the park. All rides were stopped and safely evacuated,"Kings Dominion PR & Communications Manager Katelyn Sherwood said. "Rappahannock Electric responded quickly and power has been restored. Kings Dominion will be closed for the remainder of the evening."

Sherwood said tickets dated June 11, 2016 will be honored through July 31.

“We are stuck on the Anaconda,” user AdoreTay said in a video tweeted CBS 6.

The Anacadona, one of the park’s steel roller coasters, climbs a 128-foot lift hill.

Susan Rolka said she was stuck atop the park's Drop Tower ride for more than five minutes.

Rachel Elizabeth Irving said she was inside Boo Blasters on Boo Hill, described on the park's website as an interactive dark ride experience, when the lights went off.

"The power started flickering," she wrote. "We laughed it off thinking it was the ride.. And bam, lights out and poor little kids screaming scared in the dark."

Carey Marchand was also at the park when the outage occured.

"My family and I were stuck in the Eiffel Tower for about an hour and a half," Marchand said. "Thank you Kings Dominion staff for immediately working on the issue."

Kem Woodland said she got stuck on the park's new Delirium ride, which is on the site of the former Shockwave stand-up coaster.

"Thank God we were in an upright position!" she wrote.

Tim D Maxwell said he knows an employee that works at the park and that the "main transformer" blew.

@KingsDominionVA people stuck on the Ferris wheel at kings dominion as the power goes out #kingsdominion pic.twitter.com/6PGz8gVpJt

Were you at the park? Weigh in on the WTVR CBS 6 Facebook page. 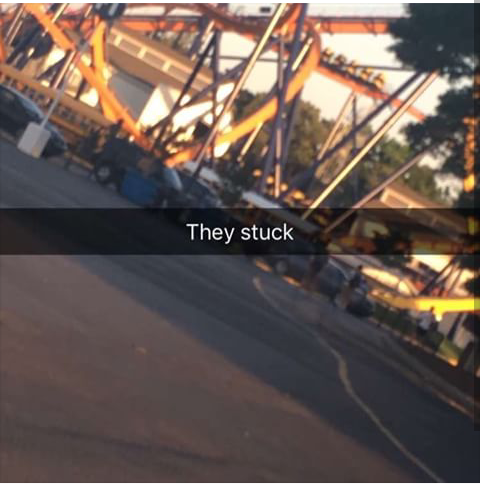 If you have a photo from the park, click the "submit your photo" button at the bottom of this story.