Owner Karl Homburg behind the bar he made, where he will sell the beer he brewed

RICHMOND, Va. – In 2011, Karl Homburg’s girlfriend bought him a homebrew kit, and he found himself over the stovetop brewing up his first batch of beer. He enjoyed the process, so he bought another kit and did some research to make the next round even better.

“I liked getting involved in the craft,” said Homburg on Friday, from behind the bar of  Castleburg Brewery and Taproom.

The Kickstarter investor wall, an incentive of the fundraiser

Batch followed batch, in 2013 came the first award, 17 investors raised cash in 2015 – along the way there were some business classes – and five years after that first kit, Homburg is ready to pour you a beer in the taproom.

Castleburg’s grand opening is Saturday, May 28. There will be three varieties of beer served that were brewed on a 2 bbl, three-burner pilot brew system.

Homburg modeled the business after Champion Brewing in Charlottesville, and said that locally, it is most akin to Final Gravity.

After a successful $9,136 Kickstarter in 2015, along with other investors, Homburg leased the building at 1626 Ownby Lane, which intersects with Hermitage. It’s a block away from Hardywood Park Brewing.

“Proximity is not your enemy,” Homburg said with a smile.

He has spent the last year working the 1,500 square foot taproom, of a 2,750 square-foot building.

Owner and brewer Karl Homburg made the tables and bars in the taproom.

Homburg fashioned the tall, dark tables out of wood salvaged by a Virginia company. A long plank of rich, brown wood – a shade of brown ale, if you will – provides bar seating in the main room.

All the work has been in addition to his day job, which is IT at a civil engineering firm – incidentally, one who did some work for the East Coast Stone Brewing Company.

The centerpiece of the taproom is the precast stone bar topped with reclaimed wood that Homburg built; 10 taps are perched behind it and a chalkboard with the beers and specials. 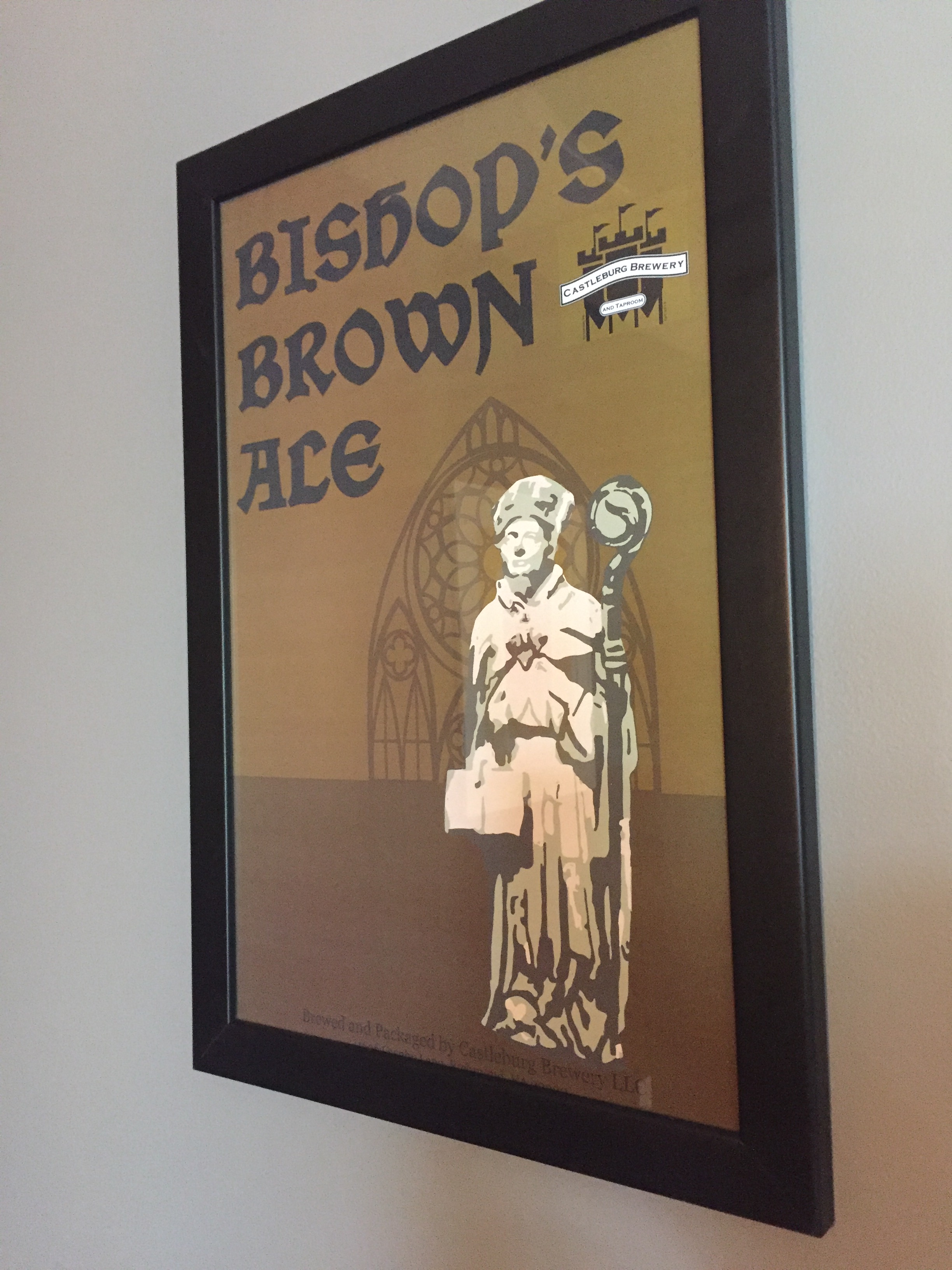 Bishop Brown Ale, Black Knight IPA and Castleburg Cream Ale are the flagship beers that will be served, and there is red ale in the works. Homburg said there are 12 recipes on the calendar so far.

“Regular man’s beer,” Homburg said. “A comfortable place and good beer, where they know what they are getting.”

Castleburg Cream Ale is 5.1 ABV/16 IBU. It’s an easy-drinking, light beer with a buttery mouth feel that is lightly-hopped and has a little bit of wheat.

The cream ale took first place in the Dominion Cup contest in and second place in the National Homebrewer’s Competition in 2014, along with other medals.

The brown ale took second place in the 2014 Dominion Cup and other several regional competitions.

Black Knight IPA is 6.7ABV/80 IBU. Warrior hops brings the bitterness, and is joined by Cascade, Centennial, and Chinook hops.

The logo design incorporates conical fermenters into the bottom of the turrets.

In total Homburg has won 20 regional and national awards for his beers, most which are named around the castle theme –mOatmeal stout, Court Jester Porter, Battering Ram Roggenbier, The Keep and Queen’s Garde.

Homburg currently has no one on the payroll. He relies on a roster of volunteers and there is a sign-up sheet for those interested. For him, it’s all a part of the community-minded enterprise, and a sustainable way of business. Currently, the taproom hours are weekends only, but they will be open Memorial Day.

“The market can sustain something this small for the time being,” he said.

All beers will remain within the castle, so to speak, for the next year or so. Homburg is not pushing for a distributor right now, though he said it is ultimately part of the business plan.

There are growlers and grunts for purchase, which will likely be filled starting the weekend after grand opening. Homburg wants to make sure that of the 62 gallons brewed, there is enough to go around.

The brewery sits just across from the newly drawn Scott’s Addition boundary, a craft beverage hub.

Ardent Craft Ales, Black Heath Meadery, Buskey Cider, The Veil and Isley Brewing are already open in Scott’s Addition. Reservoir Distillery has been producing whiskey on Summit Street since 2009 and recently opened a tasting room at 1800 Summit Avenue. Within the next month Three Notch’d Brewing will open. Vasen Brewery and Blue Bee Cidery will open in fall 2016, maybe sooner for Blue Bee.

Outside of the city, on Midlothian, Steam Bell Beer Works has a June opening planned, as does Kindred Spirits in Goochland.

“People drinking my beer, and people liking it,” is why Homburg said he is in the business.

You can #stormthecastle and enjoy one of those craft beers, starting at 11 a.m. Saturday, May 28. Mean Bird Food truck will be there Saturday, and Gyro and Kebab King truck will be slinging food on Sunday.

Expect winning beer at $6 pints and $3 half-pours, along with cornhole, board games and general merriment.