Death toll jumps to 272; more than 2,500 injured in Ecuador earthquake

The death toll has soared to 272, Ecuador’s President Rafael Correa said Sunday evening. Correa also said that the death toll is expected to rise as rescue teams dig through the rubble.

Earlier in the evening, Vice President Jorge Glas had estimated that at least 2,527 people were injured.

The hardest-hit area was the coastal Manabi Province, where about 200 people died, said Ricardo Peñaherrera of Ecuador’s national emergency management office. The cities of Manta, Portoviejo and Pedernales, a tourist destination, saw the most devastation but damage was widespread throughout the country.

“It was the worst experience of my life,” survivor Jose Meregildo said Sunday about the tremors that violently shook his house in Guayaquil, 300 miles away from the quake’s epicenter. “Everybody in my neighborhood was screaming saying it was going to be the end of the world.”

“I found my house like this,” said Nely Intriago, standing in front of a pile of rubble. “What am I going to do? Cry, that’s what. Now we are on the street with nothing.”

The earthquake hit Saturday night, buckling overpasses, causing houses to collapse and knocking out power in Guayaquil, Ecuador’s most populous city, authorities said. People left their homes and wandered around, some sleeping in the streets.

People looking for family and friends frantically dug with their hands and tools until excavation equipment arrived. Emergency officials recovered one body from the scene of a bridge collapse there.

Video showed rescuers looking for a young girl underneath the rubble of the Hotel Miami in the province of Manabi, finally pulling her out and taking her away on a stretcher. 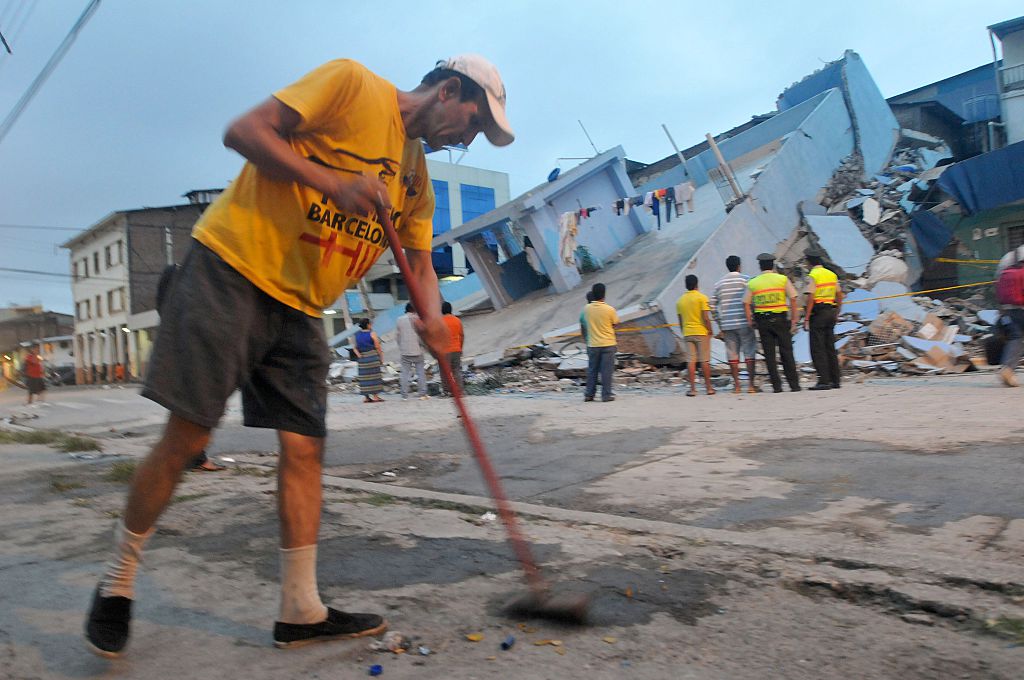 In a race to help residents, Ecuador deployed 10,000 soldiers and 4,600 police officers to the affected areas. The armed forces built mobile hospitals in Pedernales and Portoviejo and set up temporary shelters.

The military also brought in more K9 units to aid the search for survivors — and bodies.

“The lack of water and communication remains a big problem,” Peñaherrera told CNN en Español. “Many highways are in bad shape, especially in the mountainous area because it has been raining recently due to (the) El Niño weather phenomenon.”

The governments of Colombia, Chile, Spain and Mexico are sending help for rescue efforts, Glas said.

A state of emergency is in effect for six provinces — Guayas, Manabi, Santo Domingo, Los Rios, Esmeraldas and Galapagos. Authorities urged those who left their homes in coastal areas to return after a tsunami alert was lifted.

Glas arrived in Pedernales on Sunday to witness the destruction. Ecuadorian President Rafael Correa arrived in Ecuador on Sunday night after attending a Vatican conference in Rome.

During his Sunday prayer, Pope Francis asked for those present to pray for the people affected by the earthquakes in Ecuador and Japan.

“Last night a violent earthquake hit Ecuador, causing numerous victims and great damages,” Francis said. “Let’s pray for those populations, and for those of Japan, where as well there has been some earthquakes in the last days.”

Ecuador’s Interior Ministry ordered all nightlife venues in affected areas closed for the next 72 hours.

Also, the nation’s soccer federation said it has suspended the remaining matches of the current round of the Ecuadorian championship.

All mobile operators are allowing free text messages for customers to reach out to loved ones in Manabi and Esmeraldas provinces, Glas said.

The tremor was centered 27 kilometers (16.8 miles) southeast of the coastal town of Muisne, according to the U.S. Geological Survey.

It’s the deadliest earthquake to hit the nation since March 1987 when a 7.2-magnitude temblor killed 1,000 people, according to the USGS.

The earthquake left shoppers shaken in Guayaquil. Video footage from a store showed kitchen utensils swinging back and forth as some items tumbled off shelves.

There were no immediate reports of damage or injuries in the capital of Quito, 173 kilometers (108 miles) from the quake epicenter. The tsunami threat following the earthquake has “mostly passed,” according to the Pacific Tsunami Warning Center.

An earlier warning for other nations with coastlines on the Pacific was canceled.

Forty-one people were killed when a magnitude-6.2 earthquake jolted the Kyushu region Thursday, followed by a magnitude-7.0 in the same area Saturday, authorities said.