The Henrico School Board asked the public to suggest names after a grassroots effort convinced board members having a school named after Senator Byrd, a man who supported school segregation in the 1950 and 60s, was not appropriate.

Henrico Schools released a list Wednesday of the suggested names [scroll down to see all 17 pages].

While the new name will be determined by board members, the list indicated how many times each name was suggested.

The most suggested names so far are:

"Alysia Burton attended Byrd from 1989-1992, but tragically lost her life on September 11, 2001," a Change.org petition said about the former Byrd student. "Those of us who knew Alysia can still vividly remember her contagious laughter, compassion for others, and tireless love of life."

Henrico Police Officer Neil Griffin, who served a school resource officer at Byrd Middle School, passed away in March after a battle with cancer.

"Officer Griffin was a role model for his students and colleagues; a dedicated, hard worker; and a friend to everyone he met," a Henrico Police spokesman said after Griffin's death.

The Vanderall family owned the land where the school was built.

"The Vandervall family decided to approach the Henrico School Board about renaming Byrd School, Vandervall, to restore the history that was wiped out," the Reinstate Vandervall School NOW Facebook page indicated. "Vandervall stands for engagement of a diverse learning environment and community. Vandervall is Henrico's history reaching out to Henrico's future."

"Dr. Lonnie E. Gailes was the first principal of Byrd Middle School and served from 1971-1984. His career was as a teacher, assistant principal and principal in several Henrico County Schools," his Change.org petition stated. "He was honored because he was also a true advocate of the students."

"Dr. Bosher devoted his professional life to the education of young people across Virginia. He was a teacher, principal, school superintendent and college professor. He was an elder for many years at Fairmount Christian Church and served on numerous corporate, nonprofit and government boards. Above all other things, Dr. Bosher was a devoted son, husband, brother, father, grandfather and servant of God," his obituary read.

Other suggestions were to rename the school after a geographic location:

Click through the photo gallery below to see 17 pages worth of suggestions. 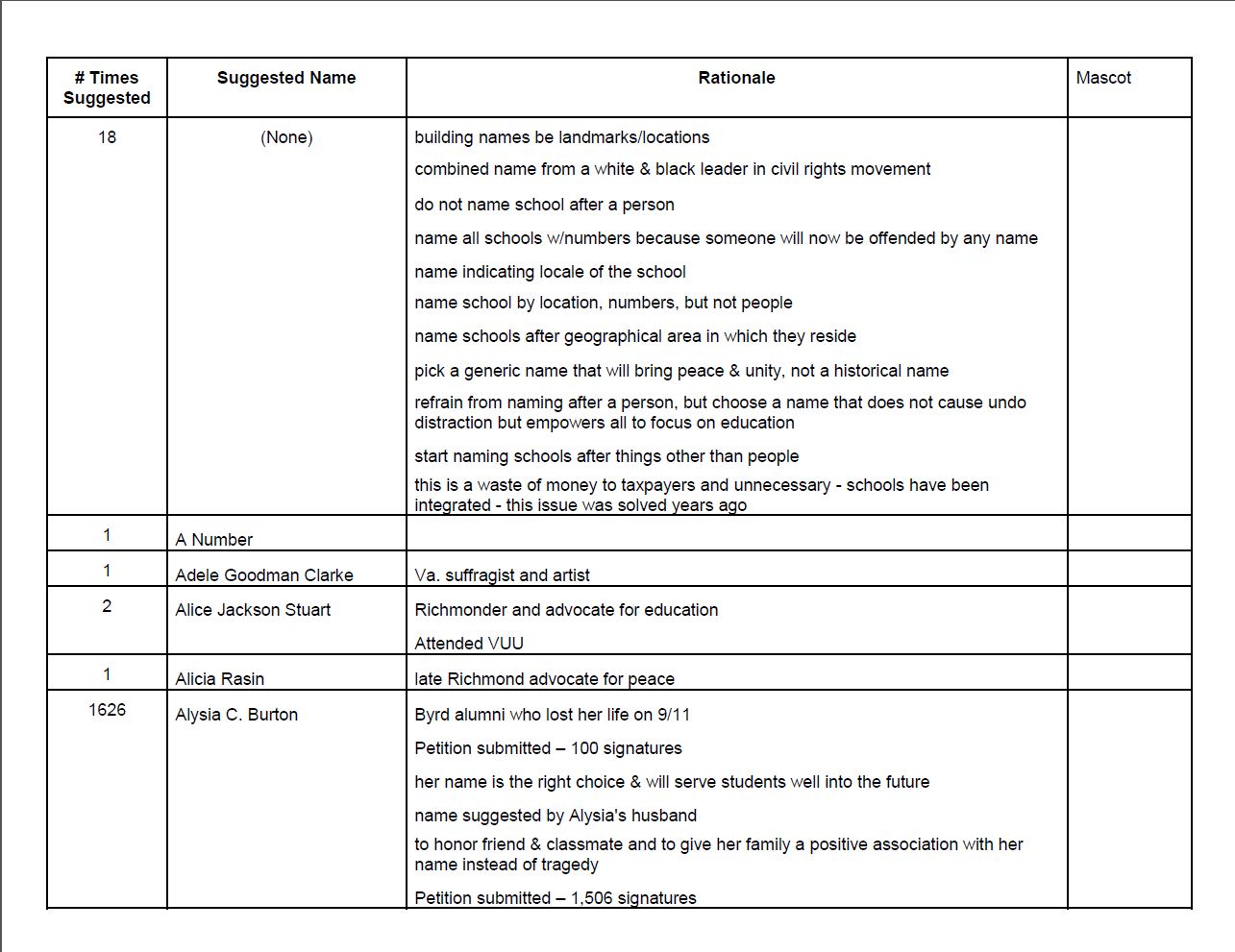