HENRICO COUNTY, Va– Police are searching for a suspect who crashed a stolen car into a West End jewelry store early Thursday morning before stealing merchandise and running off.

The crash happened just after 4:05 a.m. when the suspect rammed a car into the Adolf Jewelers store at the Ridge Shopping Center. The shopping strip is in the 1500 block of North Parham Road.

“It was determined that the suspect, a light-skinned black male, drove the vehicle into the business, removed jewelry, and fled the store on foot,” Henrico Police spokesman Lt. Chris Eley said. “During the course of the investigation, it was determined that the vehicle used in the burglary was stolen sometime during the overnight hours between March 30th and the time of the incident.”

He closed his business for the day but expects to reopen on Friday.

“I backed up my tape and saw someone drive that car through the showroom, I was able to see that person run around my store do damage,” said Adolf.

Adolf told CBS 6 he’s confident the suspect will be caught, as he has around 35 cameras in the store.

“This guy is on film,” said Adolf, “we have quite a few pictures of him so I believe he’s going to get caught, so probably not a smart move.”

Photos of the suspect show a man with his arms full of merchandise.

The store’s owners, who were on the scene while police investigated, are still working to figure out how much was stolen.

Crews were able to pull the car out of the store. Several windows were damaged. 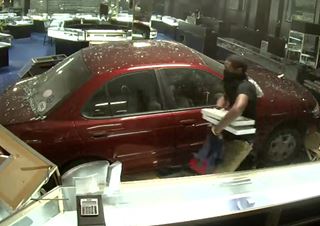 SHARE on social media to SPREAD the word!
37.602165 -77.564721
Copyright 2021 Scripps Media, Inc. All rights reserved. This material may not be published, broadcast, rewritten, or redistributed.