NEW KENT COUNTY, Va. — A crash involving an overturned semi filled with corn closed all lanes of I-64 west in New Kent County for more than an hour Friday afternoon.

Sgt. Steve Vick with Virginia State Police said the crash happened on the interstate between West Point and Providence Forge (near mile marker 217) at 11:44 a.m.

“The tractor trailer is on the left side of the interstate into in the wood line,” Vick said. “There is a diesel fuel spill and the contents of the trailer spilled out, the trailer was loaded with corn.”

The driver was flown by helicopter to VCU Medical Center.

As of 2:10 p.m., traffic was backed up for more than nine miles and traffic was being diverted at edit 220 to Route 33/Eltham Road.

Earlier in the day, drivers were warned to expect delays and use an alternate route.

Folks traveling west — and able to get off the interstate — can take New Kent Highway (Route 249). You can then  make a left on North Courthouse (Route 155) to head back to I-64. And if you’re up for a more scenic drive, just stay on New Kent Highway until it runs back into I-64 and Route 60. 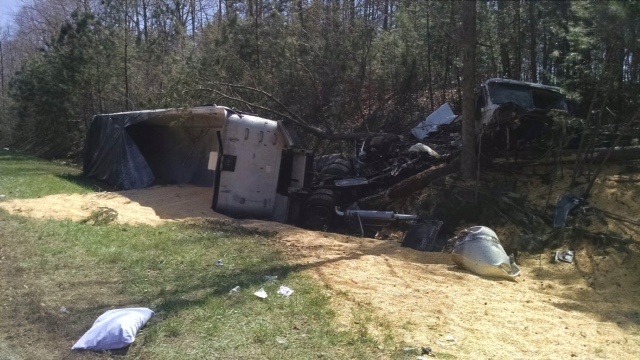