HENRICO COUNTY, Va. -- Twenty-six people were displaced after fire ripped through a third-story apartment at the Chase Gayton complex, off Gaskins Road, Sunday morning. Henrico Fire crews were called to the complex just before 6 a.m.

As many as 12 families will be displaced due to the fire and the American Red Cross assisting residents with needs.

"Crews fought hard to contain the fire to the building of origin," said Henrico Fire spokesman Capt. Danny Rosenbaum. "They transitioned from interior operations to exterior operations and back to get the fire under control. It took crews over an hour to knock down the majority of the fire."

Rosenbaum said the building where the fire broke out suffered extensive fire and smoke damage.  Crews managed to stop it before the fire before it moved to an adjacent building, but that structure did suffer smoke and water damage.

Woman: 'Our building was up in flames'

“The firefighter came in and he was like, ‘We gotta get y’all out,’” Tawanda Rose said. “We came out and our building was up in flames.”

I’m homeless, like where do you go what do you do?” Rose added.

“It’s 5 o’clock in the morning,” Rose said. “You don’t think that, ‘I gotta get what I can out of the house now.’ The potential for everything to have been nothing, I couldn’t believe it.”

Rose said what happened is a reminder of how quickly life can change.

“Keep in mind that anything is possible,” she said. “We see stuff like this on the TV, but you don’t ever think that it`s going to happen to you

No one was injured in the fire, but officials said many of the dozen families displaced lost everything.

While residents are thankful that no one was seriously injured in the massive fire, the reality of what could have been— and what is, has set in.

“Where am I going to stay is the question. I don’t know right now,” said resident Freddy Jenkins. “They’re telling us around here, in May that they’ll probably have somewhere for us to go. They say they have sister apartments,” added Jenkins.

Many residents have been put up in hotels through their renter’s insurance. Some are on waiting lists to find new housing through the apartment complex.

Fire investigators are trying to determine the cause of the fire that has been ruled accidental. 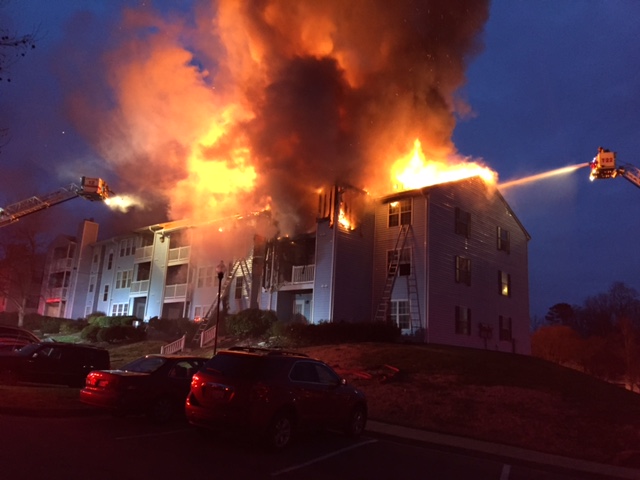