How much snow to expect Thursday night and Friday morning

RICHMOND, Va. -- An upper-level storm system (over central Montana at the time of this post) will approach Central Virginia Thursday afternoon, spreading light snow into the area by late afternoon and early evening.

The most likely window for the snow to begin in the Richmond Metro area will be between 4 p.m. and 6 p.m. Thursday.  Surface temperatures will be in the upper 30s and low to mid 40s at the onset of the snow, and with dry air between the cloud base and the ground, the rate of snow reaching the ground will be very light and will initially not stick.  The start time will occur during the rush hour, but given the conditions stated above, widespread issues due to the weather for the Thursday evening rush are not expected.

Heavier snow will overspread the area Thursday night through Friday morning as surface low pressure develops off the Virginia coast, with the heaviest 6-hr window occurring between midnight and 7 a.m.  The snapshots below show the progression of snow every hour through this period: 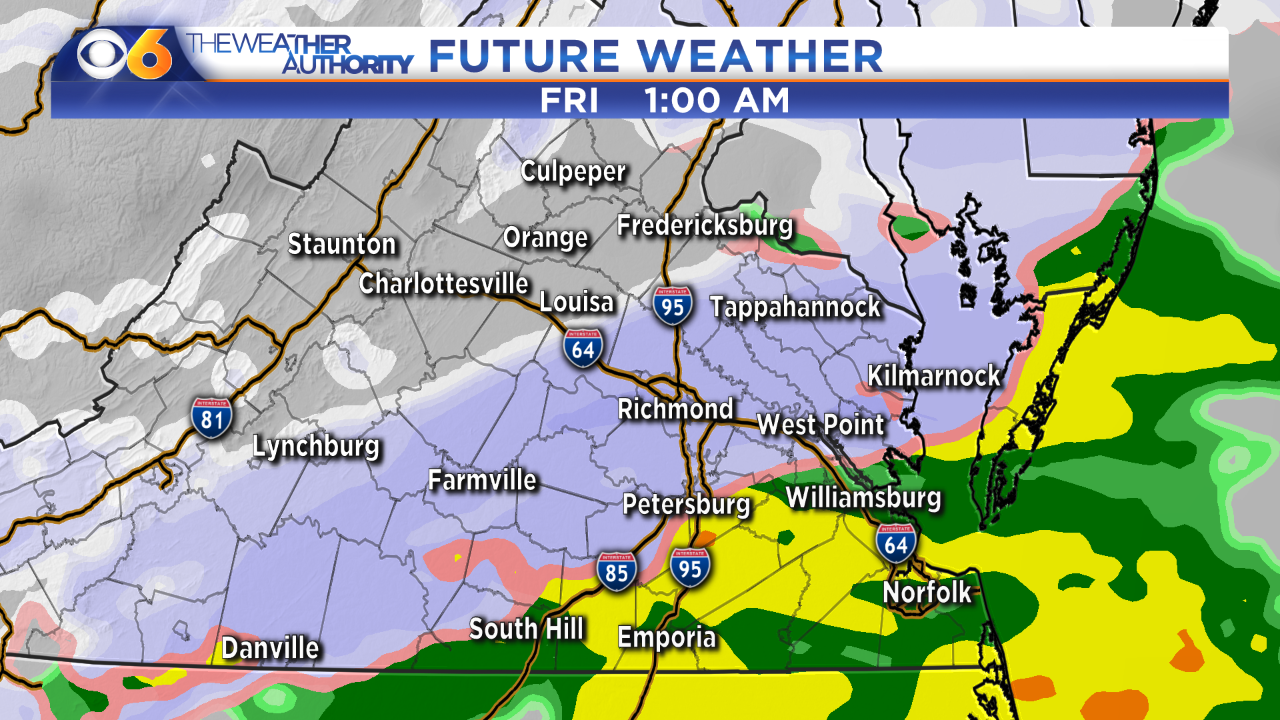 Temperatures will be very close to the melting point both at the surface and aloft, so rain mixing with the snow will be possible, especially south and southeast of Richmond.  The snow will come to an end by 9 a.m. Friday in the Richmond Metro Area as the low moves northeast of the region, and in eastern areas of Virginia by Noon Friday.  Below is the initial thinking on snowfall totals for the area.  We'll tweak these contours and numbers on Thursday if needed.

Highs will warm into the upper 30s and low to mid 40s by Friday afternoon.  This event will yield a very wet snow, great for making snowballs and snowmen in areas that receive enough snow.  -- Zach  Click to connect with Zach Daniel on Facebook

Depend on CBS 6 News and the Weather Authority for the complete coverage of this latest winter blast.