Where hundreds of sea lions are washing up dead

WARNING: This story contains photos some viewers may find disturbing due to their graphic content. Reader discretion is advised.

Marine researchers have found more than 100 dead sea lions — most of them newborns — washed ashore along a relatively small peninsula in northern Chile over the past three months, part of a more widespread die-off being observed elsewhere on South America’s Pacific coast.

“This is happening along the entire coast of northern Chile and we’re getting reports that it’s also happening in Peru, our neighbor to the north,” researcher Carlos Guerra-Correa told CNN. “We could be talking about hundreds of sea lions washing up ashore dead in the entire region.”

The South American sea lion (Otaria flavescens) is the species affected by the die-off observed in the area of the Mejillones Peninsula in Antofagasta province, where the researchers routinely conduct marine studies.

Guerra-Correa said he is concerned that the vast majority of the dead sea mammals are newborns — though some juveniles and adults have been found.

“Some of the dead animals we have found still had their umbilical cord attached,” Guerra-Correa said. “We found one with a placenta.” 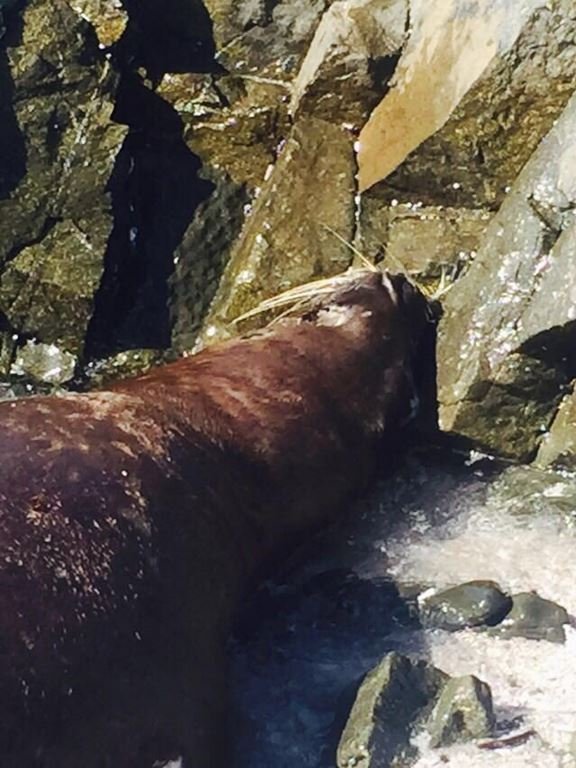 Guerra-Correa says a series of factors affecting the sea lions’ food sources are to blame for the deaths.

First, there’s El Niño. The recurring climate pattern across the tropical Pacific brings warm water to the coasts of Chile. This warm water does not have the same nutrients of phytoplankton that colder water has. Phytoplankton is important because it feeds sardines and anchovies that sea lions thrive on. In other words, sea lions seem to be starving to death because the food chain has been disrupted.

“Starvation is primarily affecting female sea lions in the latter stages of pregnancy. That’s why their babies are dying at birth or being miscarried,” said Guerra-Correa, who is director of the Regional Center for Environmental Studies and Education at Antofagasta University.

Also, he says, over-fishing is aggravating the problem because it dramatically reduces feeding options for sea lions and other species.

Teams with Chile’s National Fishing Service are investigating what the Chilean government calls “massive deaths of cetaceans.” Investigators have found dead whales in Penas Gulf in the Aysen Region located in southern Chile. The National Fishing Service reports the finding of 70 skeletons. They also found the bodies of two other animals, possibly whales, which died recently. Officials also blame these deaths in a disruption in the food chain.

Guerra-Correa the news is not so bad for South American fur seals (Arctocephalus australis), which seem to be surviving the disruption of the food chain.

“Unlike the other affected species, these sea lions are able to swim much deeper and find fish that are not present in shallow waters,” he said.

Both the fur seal and sea lion can be found along the continent’s southern Pacific and Atlantic coasts.