RICHMOND, Va - A seven-year-old girl and a VCU medical school student were unlikely Valentines this week.  Their life-changing friendship began about a week ago, and could eventually save lives.

Katie Whatley was diagnosed with T-cell Acute Lymphoblastic Leukemia in January 2015.  Whatley went into remission shortly after her diagnosis, according to her mother, but in December while going through a clinical trial, her doctors made another discovery.

"Unfortunately, 11 months in, Katie relapsed with leukemic tumors on both her optics nerves," said Amanda Whatley, Katie's mother.  "She had a bone marrow transplant Feb. 3, 2016, from bone marrow harvested from her baby sister the day before."

Whatley said Katie's transfusion was successful, and her white blood cell count is improving each day now.  Still, many challenges lie ahead on her road toward recovery.

Katie's family lives in Norfolk, where her father is an active duty marine.

He is taking care of Katie's three siblings there while Amanda and Katie are living at the Children's Hospital of Richmond at VCU, which is home to Virginia's only pediatric bone marrow transplant program.  Amanda and Katie will likely live here for the next three to six months during her recovery, and last week Valentine's Day was around the corner

That's where Metul Shah came into the picture.  Shah, a third-year med student who is considering a career in anesthesiology, met Katie during a shift on his pediatric rotation.  While they were chatting, Katie told Shah that she didn't have a Valentine this year.

"It's just unfair because none of her classmates and none of her friends have to do that. They're not in the same situation," Shah said.

Shah came up with a plan.  He brought a group of his brothers from the Delta Chi fraternity at VCU to see Katie the day after Valentines Day.  With beanie boos and Valentines cards in tow, the group hung out with Katie for almost two hours;  Katie Perry sing-a-longs and dance-offs ensued.

"We did our best Katie Perry rendition. . . Not that great," said Shah.

"It was just so wonderful to hear her be happy and just be carefree, as carefree as you can be with an IV pole that has eight or nine tubes coming down," her mother said.

Although Katie was shy at first, her mother said she quickly warmed up to her new Valentines.

"It was just wonderful to see her happy; her little creative mind working," said Whatley.

While Katie is improving on a daily basis, especially after her Valentine's visit, her mother said she has a difficult journey ahead.  Whatley counts their family lucky.  Doctors could not find an adult match for Katie on the bone marrow registry.  Fortunately, her baby sister was a match.

"Families we know are still searching for their match, and they just have to wait and get sicker," said Whatley while discussing the other families the meet bone marrow unit at C.H.R. at VCU.

Whatley and Shah said Katie's story is an example of why more people need to sign up for the bone marrow registry.  It can be as simple as filling out a form and getting a cheek swab, according to Shah.

"It's really hard to get a match, so the more people that are in the [registry] the more chances for success you'll have," said Shah.

If you want to sign up for the bone marrow registry on behalf of Katie, click here.

To read more about Katie's battle and to send her encouragement, click here. 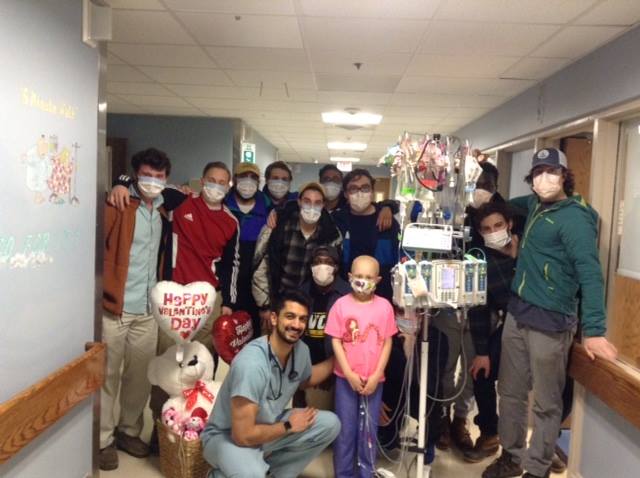