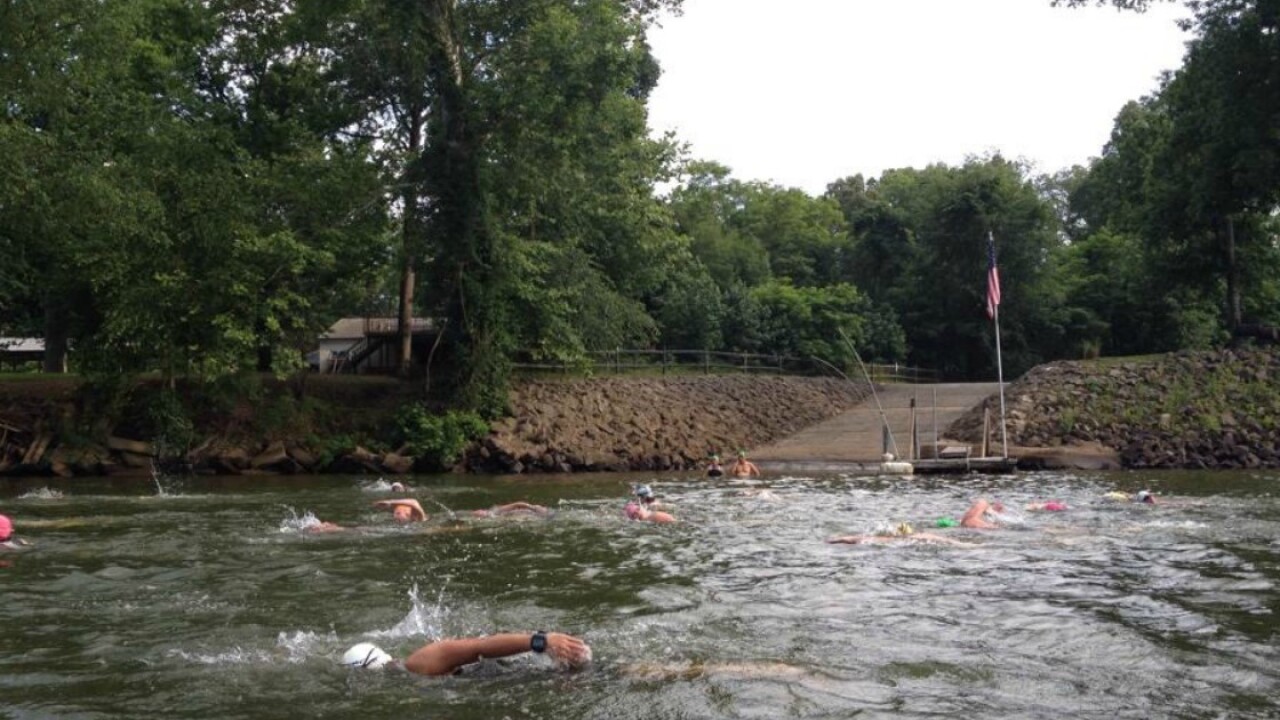 April through October a group of open water swimmers swim in the James River multiple times a week.

RICHMOND, Va. – A group of local swimmers and advocates of the James River will gather Saturday to demonstrate against Dominion Virginia Power’s plan to release millions of gallons of coal ash wastewater into the James, believing it could have devastating consequences for the health of nearby communities and the river.

Organizers hope the event can spread awareness of the issue before the State Water Control Board’s final vote on Thursday, Jan. 14, to grant the utility company the state permit required to pump waste from the coal ash ponds at Bremo Bluff Power Station in Fluvanna, up river of Richmond.

There are three coal ash ponds which contain approximately 357 million gallons of water (dependent on  rainfall) to be cleared at Bremo.

Dominion Virginia Power and Department of Environmental Quality (DEQ) officials, on record, have declared that the plan is safe and up to standard, and the proposed permit has gone through public comment and revision.

Bremo Bluff Power Plant can be seen in the background, along the James River. PHOTO: Dominion Virginia Power

“The permit will be based on state and federal compliance and are designed to protect human uses of the river as well as aquatic life,” said Dominion Virginia Power spokesman Robert Richardson.

Coal ash is the potentially toxic byproduct of burning coal, critics say, and it is made up of aluminum oxide, iron oxide and silicon oxide. It contains arsenic, mercury and other metals.

The Environmental Protection Agency created new regulations to address its disposal, not long after a leak in a 48-inch storm water pipe at retired Duke Energy plant sent about 39,000 tons of coal ash and wastewater and up to 27 million gallons of basin water pouring into the Dan River, which flows into Virginia.

Dominion has begun its long-term process to close coal ash ponds, with the north ash pond at Bremo Bluffs being the biggest. The ponds are located at the Bremo, Chesterfield, and Possum Point power stations and the closed Chesapeake Energy Center. Only Chesterfield still burns coal.

The water which sits on top if the coal ash is considered the least toxic part, explained Brad McLane with the Southern Environmental Law Center.

The first step, explained McLane, is that Dominion will pump the water into the James and then there will be a solid waste permit issued. A cap will be put over the remaining coal ash which sits in a non-lined pit.

The Bremo and Possum Point permits are the first of this kind in the state. The DEQ will be issuing similar water and solid waste permits for the plants in Chesterfield and Chesapeake in the near future.

The dumping will take place over the next year and a half.  The waste water will mix with the James when discharged, and be diluted enough to meet proposed standards, according to McLane.

“The original permit was based on a mixing analysis that it will take nine to 11 miles to mix with the James at really low levels,” McLane said.

The group requested that no discharge be allowed when river levels are low, but was denied.

Dominion will take into consideration low-flow conditions to ensure that limits were set that would be protective of the river, according to Richardson.

“There will be a 2,000-foot area downstream of the power plant that will violate standards before it is mixed (with the James),” McLane said. “Permit allows for this. We would like for it to be treated before it hits the river; standards be met before the point of discharge.”

“By law, the water must be treated to comply with strict limits imposed by DEQ to protect local water ways,” Richardson said.

Mariah Dudley said she swims in the James at least once a week in the summer months.

That Dan River catastrophe resonates with open-water swimmers like Mariah Dudley, who want to know the direct impacts of the dumping for those who swim weekly in the river.

“Open-water swimming isn’t just about racing, it is about embracing our surroundings,” she explained. “We are all very interested in protecting the James River.

“I’m not sure that I have that much confidence in a statement that it won’t add more pollution,” Dudley added.

The group of recreational, long-distance, open-water swimmers “are looking for the plan to be halted until we know more,” Dudley said, and they are calling for more transparency from Dominion and the DEQ.

“I have heard it is bad for swimmers, for plants, but the DEQ says it is safe, and we just want to know,” Dudley said.

McLane understands their frustration and that his agency doesn’t “want the water board to approve the permit in its current form.”

April through October a group of open water swimmers swim in the James River multiple times a week.

He said that 650 people submitted public comments and attendance at meetings was strong.

Dominion maintains that there has been a lot of misinformation circulated about the process.

“The key thing that everyone should know is this permit is designed to protect the James River,” Richardson said. “Dominion intends to fully comply with all state and federal requirements.”

“DEQ’s first proposal was very weak,” McLane said.  “We still don’t think it is enough to protect the James.”

Dominion will need to comply with concentration-based limits set by the DEQ, which are based on established EPA guidelines.

Take for example arsenic, a heavy metal considered toxic to people and a suspected carcinogen that accumulates in tissue, McLane said. The chronic standard established by the EPA is 150 micrograms per liter, the average concentration to protect aquatic life, he said. For drinking water it would be 10 micrograms.

The DEQ approved 530 maximum micrograms per liter for the Dominion permit, which McLane said is an improvement over the original proposal.

The water which saturates the coal ash has arsenic at over 900 micrograms per liter, according to McLane.

“The really bad water is the water saturating the coal ash,” McLane said. “They (Dominion) will have to provide some treatment, but not the level of treatment that we believe should occur and not at what the Clean Water Act suggests if you read the law correctly.”

“But it did not provide as tough of limits as we believe needs to be in place,” he said.

The areas closest to plant will be most impacted, official says

The biggest impact will be felt near the plant and along the nearby stretch in Fluvanna, according to McLane.

A provision was added that the level of water in the north ash pond can only be lowered by six inches a day.

“Richmond is downstream enough that if Dominion is complying with their limits, then it is hard to imagine that the impacts of this activity will be felt downstream,” McLane said. “Hopefully, you are protected, based on this amendment; we think there is a very low risk.”

The public forum prior to  the permit hearing takes place at the State Water Control Board meeting  starting at about 1:30 p.m. on Thursday, Jan. 14 at the Department of Game and Inland Fisheries at 7870 Villa Park Drive.

You can read more about the coal ash permits on the DEQ site.